Release Day Blitz for Striving for Acceptance by B.L. Mooney 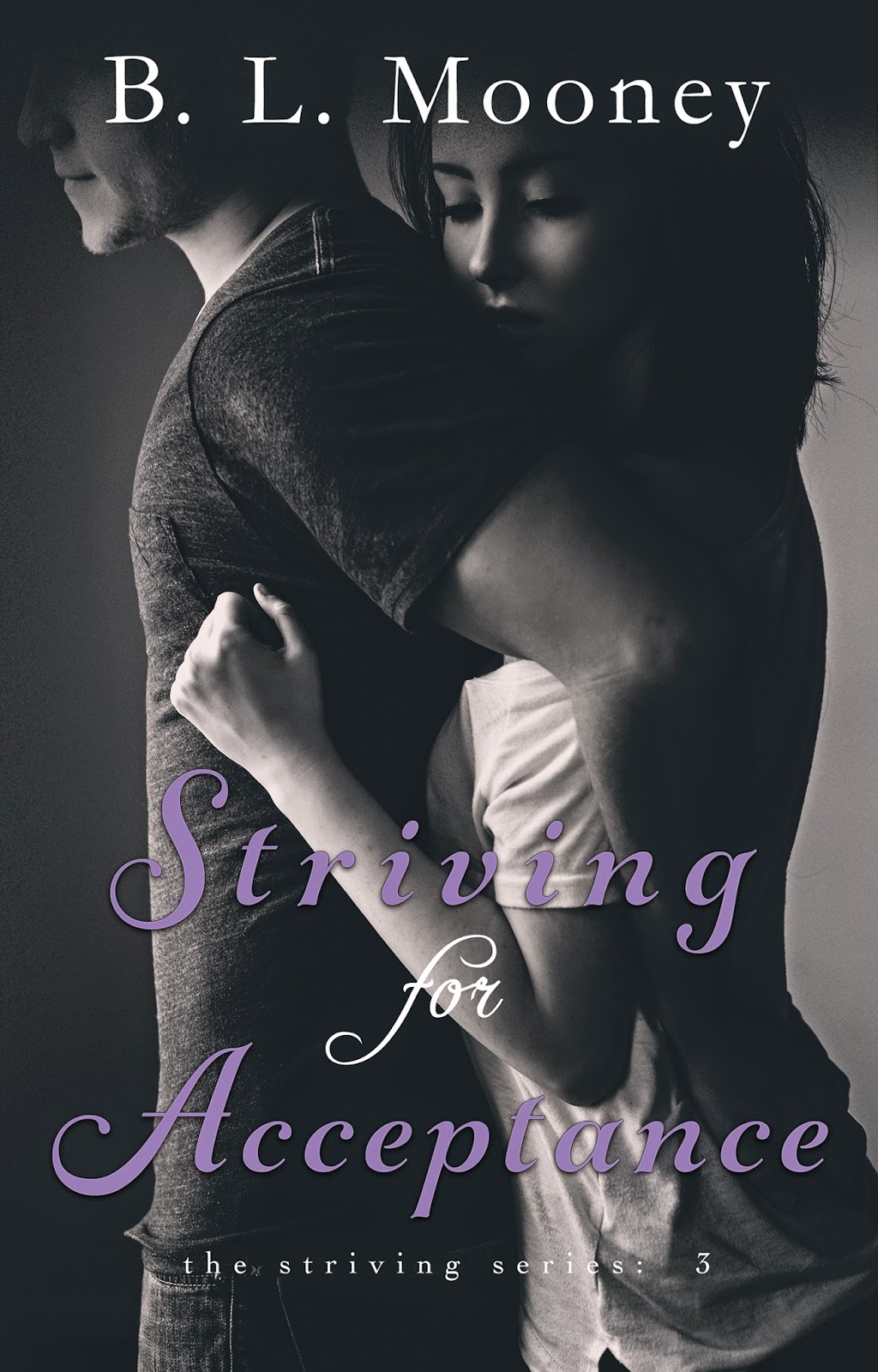 Third in the Striving Series, but can be read alone.

We all want to feel accepted, but sometimes we do unacceptable things. When we push it too far and do the unforgivable, are we still allowed to hope for that acceptance?

Or are we doomed to accept a life of loneliness?

My current bed friend is someone who’s struggling to find his own acceptance. His big crime? He’s following his dreams. His father can’t accept the fact he no longer wants to follow in his footsteps. Should he be shut out because he quit the family business? I don’t think so. But if he should, I’ve got bigger problems.

I cheated on my husband and then killed the man I cheated with. Would you still accept me?

Ages 18+ due to adult situations and violence. 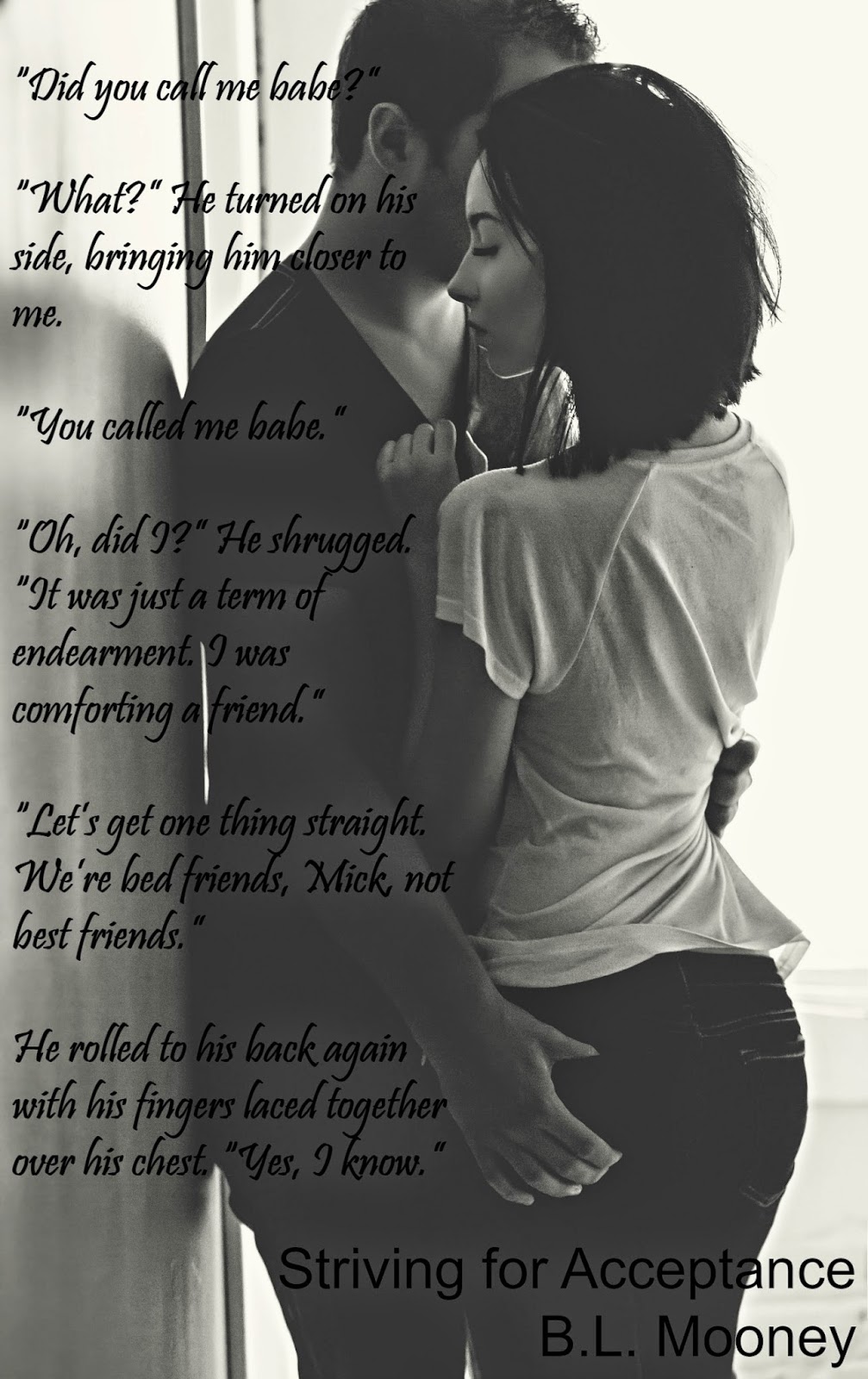 “Could you hand me another clay pot, please?” I was crouched down, getting the displays ready for opening day. Never mind it was still three weeks away. I needed to keep busy.
The pot appeared before me and I grabbed it. “Thanks.”
“You’re welcome.”
I turned my head to the male voice and was inches from a bulge I’d gotten used to having in my face. I hadn’t seen what the bulge was made of yet, but he sure liked thrusting it in my face every chance he could.
I snipped the shears I had in my hand. “You’re very brave to come that close.” He backed up. “That’s what I thought.”
I stood and looked at him. His curly blond hair needed a cut, as usual, and the smirk on his face needed to be smacked off. I tilted my head to the side and wondered what he would look like without the scruff he tried to pass off as a beard. Why should I care what he would look like? I shook my head.
“What do you need, Mick? I’m busy.”
“I just thought I’d see if you needed help.”
“As I’ve told you the other fifty times you’ve come over, no. I’ve got everything under control.”
He rocked back on his heels and looked around. “It does look good.”
“Thank you.”
My sister, Rachael, came from the back and smiled. We were complete opposites. She had long, wavy blonde hair while my hair was black and cut short. You might have been able to tell we were from the same gene pool if I showed my body off the way she did, but I liked to keep things a little more under wraps compared to her curve-hugging style. Besides, I’d always been the more casual type and she was all about the latest styles. It looked good on her, but I’ve got better things to worry about than clothes.
The other thing which set us apart was the fact she was friendly. I wasn’t. “Hey, Mick, what brings you over?”
“Just being neighborly.”
I rolled my eyes and turned to work on another display. “We’ve got it. Thanks for stopping by.”
Rachael waited until he left. “You’re not very nice to him.”
“He isn’t someone I want to be nice to.”
“I think you could be very nice to each other.” She smiled. “I’ve tried to get Carl to grow some scruff like that. It’s sexy. The least you could do is play nice with him and tell me if it—”
“Look, he’s the lease-holder. I don’t need to be caught up in that. Plus, he’s a little rude, always pushing his cock in my face.”
Her hands fell to her sides. “Excuse me?”
“Yes, it’s always there.”
She smiled. “Maybe you’re just always looking.”
“Don’t you have to pick up Amy?”
“Shit.” She looked at her watch. “I really do, but this conversation isn’t over.”
I mumbled, “It is for me.”

I unlocked my door and threw my purse on the chair. I wanted to take a shower before I went to Al’s. He didn’t care if I came over dirty from working in the shop, but I cared. Before I got to the bathroom, there was a knock on my door. I smiled; only one person knocked like that. He could shower with me.
I opened the door and smiled even wider. “Hey, I was just going to jump in the shower and head over, but you can come in with me. My back needs washing.”
He stepped in, but didn’t look happy. “Deb, we need to talk.”
I lowered my head and shut the door. I was dreading this day, the day he demanded more than sex. I turned and looked at the guy I’d spent the last several months with but knew very little about. That was how I wanted to keep it.
He was blond, dumb, and a great fuck. That’s all I needed to know and all I wanted to know. I was going to miss the orgasms he could give me. Fuck. “Al, we’ve talked about this.”
“No, actually.” He looked at the package in his hands. “I met someone.”
I took a step back. I hadn’t expected that. “You did?”
“Yeah, and I want to be exclusive with her.” He handed me the package.
“What’s this?”
“A goodbye gift.” He rubbed the back of his neck with his hand. “Don’t open it until I leave, but I feel bad about this.”
I put the box on the side table and hugged him. “Do not feel bad at all. I’m very happy for you.”
He hugged me back. “You are?”
“Of course.” I backed up and patted his chest. “You have a big heart in there and have wanted to give it to someone for a long time. I’m glad you’ve found someone to give it to.” I looked at the gift. “You really didn’t have to.”
He smiled. “Yes, I did.” He checked his watch. “She’s coming over any minute, so I should get back to my apartment. Thanks for being cool with this. I’m going to miss you.”
“I’m not going anywhere, champ. We’ll still see each other. We’ll just see each other with our clothes on.”
He smiled and nodded as he walked out. I locked the door behind him and turned to the package. I should’ve given it back to him. He didn’t need to give me anything. What I received from our time together was the only thing I’d wanted from him. I opened the package and smiled. I guess he wanted to make sure I still had my orgasms.
I took it out and looked at the deluxe model vibrator he had given me. I wasn’t much into vibrators and didn’t have the need for them with him next door. I shrugged and took it to the bedroom. I didn’t have him anymore, so no need for his money to go to waste. B.L. Mooney started writing when the voices and storylines in her head ran out of room. They were getting too cramped and neither B.L. nor the characters could take it anymore, so she did the only thing she could do—she made room. She always knew she wanted to write, but vowed to make time for it later. Now that she’s made time for writing, most everything else falls to the wayside. That seems to suit the characters that keep popping up in her head just fine.

B.L. lives in the Midwest, and her other talents include in-demand cookies, a very dry sense of humor, and stealth eavesdropping. Some mannerisms, attitudes, or twists come from random sentences picked up while passing by strangers. So speak up the next time you have something to gossip about. You never know, it may just end up on the pages of the next book you read.

She loves to hear from her readers and you can contact her via email at AuthorBLMooney@gmail.com