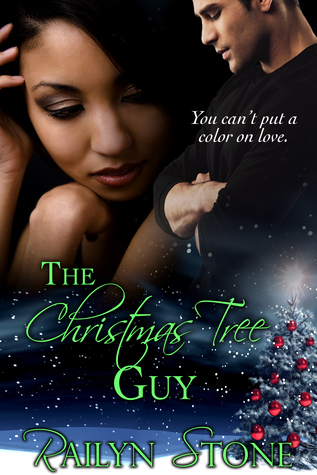 The Christmas Tree Guyby Railyn Stone
Synopsis:
Sydnee Garrett has a lot on her to-do list. Wrangle her young and rambunctious twin boys. Check. Get her life back in order since her husband decided to leave her for a much younger woman. Check. And buy a Christmas tree. Check. What she wasn’t expecting was adding one more thing to her list. A young, sexy personal trainer. Check. Quinn Masters is a man who knows what he wants and doesn’t take no for an answer. He isn’t fazed by age or race differences and he does everything in his power to win Sydnee over. Will Sydnee continue to fight for her orderly life or welcome in the chaos that’s threatening to change her entire world?
About Railyn Stone:
Writing since she could pick up a pen, Railyn Stone hails from the Tar Heel State and is a romantic at heart. She believes you can find romance in the simplest aspects of life and enjoys letting her imagination run wild. Trying new restaurants, listening to music, playing golf and writing stories about ordinary people are the hobbies she cherishes most.

Saying “I Promise” is the easiest thing to do, its just two tiny words.
No one warned me of the weight they hold, that they not only have the power
to make something, to give hope, or show devotion.
They can destroy everything, cause so much hurt, ruin lives.
Every promise holds a toll, if I had known what mine would cost me,
I would have walked away.
Now I have to pay the price, watch the consequences of my actions unfold. Witnessing someone I love crumble after breaking my oath
isn’t the hardest thing I’ve endured,
it's being forgotten by the one person that I could never forget.

The prologue threw me for a loop and I thought the book might be going in a different direction.  After reading the prologue, I couldn't put the book down, I had to know what happened.   Elle Brooks definitely keeps you guessing what will happen next.

Blair and Ethan have some major obstacles to overcome in this one.  I didn't think it was possible but I loved Ethan even more in this one.    Ethan and Blair's story is an emotional read but it well worth the ride.

A copy was received for a review.
4 Amazeballs Stars!!!

I wasn't planning on falling for Ethan Jamison, hell I wasn't planning on our paths ever crossing. He’s the most popular guy at school and a complete player. Me; I’m the perpetual good girl, trying to carry out one last request. But when you make a promise, how far do you go to see it through? ~ BlairIt’s a running joke that I’m a terrible liar, if only people knew the truth. My whole life has been spent making excuses and deflecting questions. I was pretty good at it until Blair Thomas entered my world. She saw through the mask that everyone is so willing to accept. She makes me want to tell her all my secrets, but can she promise to keep them?~ Ethan


a Rafflecopter giveaway
Posted by Gia Guido at 8:33 AM No comments:

Release Day for Strip Back by Ava Manello

Strip Back brings you back to how the Naked Night's began. This is Eric's story. Back when life was a little less polished, and a whole lot harder.

Before there was Strip Teaser, there was Eric; manager and founder of the Naked Night’s male stripper troupe.

You wouldn’t think you’d be past it at 34, but that’s the position Eric found himself in, as well as newly single after finding his girlfriend in a compromising position.

Setting up the Naked Night’s wasn’t easy, it wasn’t fun, and it wasn’t without sleaze, but somehow he did it.

Strip Back is a humorous and steamy tale of one man’s journey to fulfill a dream. Not all male strippers are the same.
Add to Goodreads

OTHER BOOKS IN THE SERIES

Passionate reader, blogger, publisher, and author. I love nothing more than helping other Indie authors publish their books be that reviewing, beta reading, formatting or proofreading,

Katalina Winter has been living for eighteen years, with a secret hidden inside of her, a secret not even she knew.
With this secret comes consequences, expectations, one's she's not willing to fulfill; she'll give her heart to whom she wishes, even if he is, a Dark Shadow wolf...
Join Katalina as she navigates her way through this world at war, where the alpha is law, and only the strong survive. You will see the power of true love, and the length's people will go to destroy it.
**Please note this is a YA Stand alone novel, no cliffhangers**

I've being reading books for as long as I can remember but I never thought about writing until I read Nalini Singh - Slave to sensation which is the first book in her psy-changling series.
At first I just wrote fan fiction until one morning I woke up with a story of my own. Lincoln and Lexia were born! I spent 6 solid months writing and re-writing and now their story is out in the world and I am currently working on the final book Holocaust due 2015.
After the birth of my 3rd child I wrote Winter Wolf a YA Paranormal Novel which is due for Release in November.
I have lived in England, New Zealand and currently live in QLD Australia but to me England will always be home.
I've been a dish washer, Admin assistant, horse groom and now spend my days looking after my 3 children and writing as often as I can. 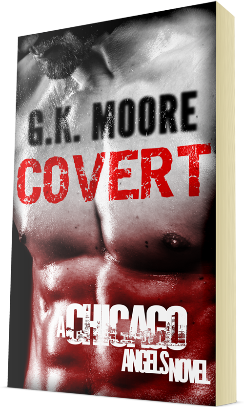 Synopsis:
Alessandro is the unwilling heir of a Chicago crime family. Intent on leaving the life set out for him, he decides to run as fast and as far away as possible. His plans crumble when one girl crash lands in his life. He should hate the daughter of his father’s mistress, but it’s near impossible when he finds that they are alike in more ways than one.

Olivia grew up watching men walk in and out of her mother’s life. When one man finally decides to stay, she learns that crime lords don’t leave until someone’s dead. Olivia’s salvation comes from the person she least expects: his son.

Six years later, Olivia and Alessandro are reunited when her life is threatened. If time has proven one thing, it’s that repeating their parents’ mistakes seems inevitable.

In a world where friendship is a luxury and love a death sentence, two unlikely lovers find each other only to be separated by their cruel reality.

Covert is for readers 17+ 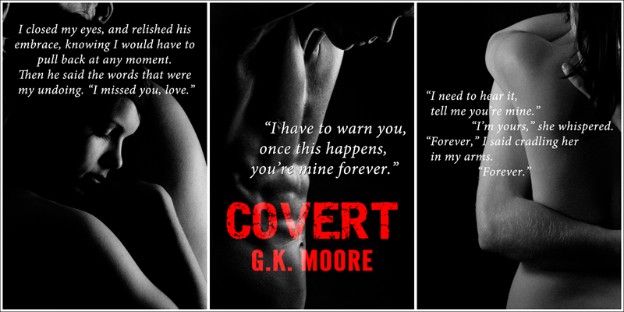 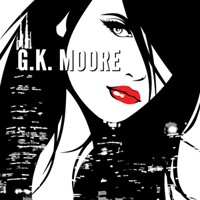 G.K. Moore loves cake, romances with alpha males and happily ever afters. When she’s not writing, she’s reading, stalking friends on Facebook, watching bad reality TV, traveling, torturing her hubby with ideas for new stories or doing all of the above at the same time. Her debut novel, a romantic suspense, is coming out December 2nd and the backdrop is one of her all time favorite cities, Chicago.

Interview with G.K. Moore:
1. Can you tell us a little about your book?

Covert is a Romantic Suspense and it’s a story that is more than a little complicated. The hero, Alessandro, is the son of a Chicago mob lord and he wants nothing to do with that life. His plan to run away falls apart when his father moves in his mistress and her daughter, Olivia. Under unlikely circumstances, they find friendship and love… And the rest is history as they say.

Covert is a story of love, intrigue, betrayal, crime, and passion.

3. Covert is listed as Book One in the Chicago Angels Series, how many books will be in the series?

For now… my lips are sealed.

4. How do you come up with your character’s names?

Some are names I like or find interesting, but I also do research and go through several possibilities until I find the right ones.

For Covert, I’ve always loved the name Olivia, so that was more or less set from the beginning. The hero’s name was another question. I went through several options until I came up with Alessandro… it just seemed to fit. Some of the supporting characters had different names in the first draft of Covert, but for several reasons they changed during editing.

5. If Covert was made into a movie, who would you cast for Olivia and Alessandro?

Oh this is a difficult question… There are no vampires in Covert, but I can imagine Nina Dobrev and Ian Sommerhalder playing Olivia and Alessandro.

6. What were some of the challenges you faced writing your debut novel?

Alessandro and Olivia took on a life of their own so it was hard to keep up!

7. Do you listen to music while you write?

Yes! I love music and I’ll listen to anything and everything, but there are a few songs that haunted me while writing Covert. Here’s the playlist…

8. What’s your most usual pastime?

I love doing origami, I’m an expert at making cranes and flowers. Our place is full of them!

My first book boyfriend was probably Mr. Darcy and I still have a soft spot for him.

10. What project are you working on now?

Right now, I’m promoting Covert. The release day is coming up very soon, on December 2nd! After that, well… the Chicago Angels Series will continue.