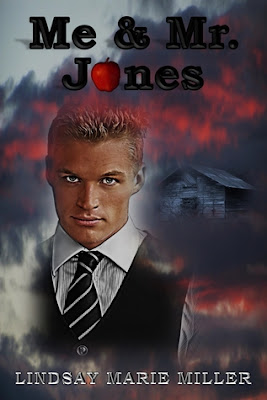 
Synopsis:
Finley O'Connell is a shy, reserved college student, who has no intention of ever trusting another man. At nineteen, Finley spends her Friday nights alone, studying clinical psychology to ease her mind of the abusive childhood she has yet to overcome. Her new professor, the young, charismatic Cabel Jones, begins to take an interest in Finley, whose first instinct is to run. But when an ordinary experiment turns to bloodshed, Finley must rely on Cabel, as the two hide away in a rustic, secluded cabin in the wilderness. Plagued by deception and fear, Finley soon finds herself in the arms of the one man on campus who can never truly be hers.

Lindsay Marie Miller was born and raised in Tallahassee, FL, where she graduated from high school as Valedictorian. Afterwards, Lindsay attended Florida State University and graduated Summa Cum Laude with an English Literature major, Psychology minor, and Specialized Studies in Markets and Institutions. Lindsay is the author of the romance novels: Jungle Eyes, Me & Mr. Jones, and Emerald Green. Jungle Eyes is the beginning of a new romantic action/adventure trilogy. Emerald Green is the first installment in a four-part series of Young Adult romantic thrillers. And the New Adult romantic thriller, Me & Mr. Jones, will be accompanied by a sequel. In her free time, Lindsay enjoys singing, playing the piano and guitar, and writing songs. The author resides in her hometown of Tallahassee, FL, where she is currently working on her next novel.

Me & Mr. Jones is a New Adult Romantic Thriller about college student, Finley O’Connell, and her new psychology professor, Cabel Jones. Danger forces them into an uncompromising situation, which only causes their forbidden romance to become all the more tempting. My debut novel, Emerald Green, is a Young Adult Romantic Thriller about high school juniors, Addie Smith and Tom Sutton. As Addie discovers secrets about her past, Tom becomes the literal man of her dreams, while they both face a criminal and his cruel, apathetic demands. My latest novel, Jungle Eyes, is also a romance novel, though the plot encompasses moments more action/adventure than strictly thriller/suspense. Jungle Eyes is set on a deserted tropical island in the year 1899, where Henry Rochester finds himself stranded alongside a beautiful stranger.
When I was in high school, books were my safe haven, at a time when I never felt like I fit in. Every time I write, I think about all the young girls in high school now, who are stumbling through adolescence (as everyone does) and feeling much of the same. My novels are a way of paying it forward. Because I can remember what it felt like to go to prom without a date, and then dream about meeting a boy like Edward Cullen at night.
My bedroom, sometimes on the laptop at my desk, sometimes in my bed with a pen and notebook in my hand. It depends on the mood I’m in, but those are typically the best places.
Scarlett O’Hara. She’s just so strong-willed and feisty, even mean when she feels that she has to be. But she’s still an incredibly perseverant woman, who will do whatever it takes to hold what she loves together. Those Civil War Era dresses are absolutely breathtaking too. I would love to prance around in one of those for a day, without the restrictive corset, of course. Plus, I think I could get used to being married to Rhett Butler.
When a new book idea first comes to me, I’ll write out little notes of where I see the novel going from start to finish, just so I don’t forget those main ideas when I get to them later. As far as day to day writing goes, I normally just pick up from where I left off the day before.
A lot of the time I do. It’s not something that I must have playing in order to write, but it can certainly set the mood for a scene I’m working on. When I was writing Me & Mr. Jones, I listened to nothing but Ed Sheeran on repeat. Now, if I ever hear him on the radio, I remember those nights when I stayed up late writing about Cabel and Finley.
I’m also a singer-songwriter. I started playing the piano when I was a kid, and then took up guitar by the time I was twelve. That’s when I started writing songs, and since then it’s always been something I’ve just done for fun. I would like to record an album one day, but I’ve got some more books to finish first.
The follow-up novels to Me & Mr. Jones, Emerald Green, and Jungle Eyes. I’ve also recently started working on a New Adult Contemporary Romance Stand-Alone that I’m very excited about. 2016 is going to be a very busy year…