Blog Tour for Angels Of The Fallen by P.T. Macias

Hot New Release 11.15.15
Angels Of The Fallen Book Of Samyaza
The Watchers Creed By P.T. Macias 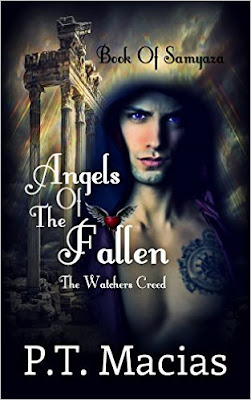 Synopsis
The pure exhaustion of eternal punishment as a fallen has left our sexy but naughty angel, Samyaza, desperate for companionship…desperate to be set free and only you hold the key.
What would you give for one night of unbridled passion? Samyaza gave his life, his freedom…everything. After thousands of years of pain and punishment the fallen one thought he’d seen it all...not even close.
Now evil threatens the world and the Watchers are our only hope. Falling from grace was easy, eternal suffering has become common place, wishing for death an everyday occurrence but when faced with a chance for redemption Samyaza fears he could fail.
His test for heavenly grace comes in the form of a beautiful, confident, modern woman who captures the fallen one heart and soul.
Strength he has. Faith in the God that sentenced him to a life in chains he holds close but all may be lost with just one look from this very special woman.
With his life, his soul and his heart on the line, can Samayza save the world or destroy it?
The Watchers are waiting, wanting…needing you. It’s time to live life on the dark side.
Time is running out. Evil forces threaten the very survival of the human race. Our only hope…The Watchers.
The fate of humanity lies in the hands of these twelve stunningly sexy, sinful fallen angels.
Only destiny knows if they will save us or doom to hell. 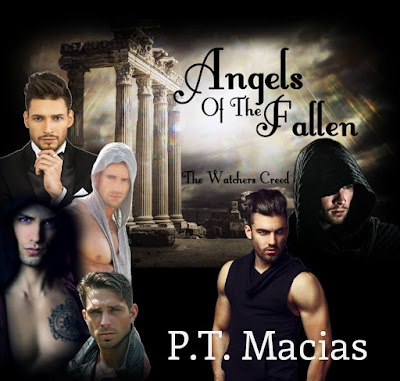 Excerpt
Here's a little nibble! Oh yeah!
“Ok, Yazy, take off that jacket and walk into the shower stall. The water should be nice and warm. You’ll love it!”
Samyaza raises his eyebrows, looking at the water spraying from the shower head. He looks at the steam swirling around.
“Ah…yeah.”
He shrugs his shoulders and the jacket falls off his shoulders and slides down his wounds. He winces and closes his eyes. He takes in a sharp breath.
“What’s wrong?”
Crystal quickly steps around him to look at his back. She gasps, outraged, and her color drains from her face.
“Omg! What did they do to you! Your flesh is totally shredded. How in the world have you been able to tolerate the pain?”
Samyaza clenches his jaw and turns around to look at her. He narrows his eyes and nods.
“Sweet Crystal, I’ll be much better as soon as I eat a meal. I would heal quicker if I have more blood.”
He watches her closely, watching her pale complexion.
“Yazy, are you serious! Look at your back!”
She points to the mirror, frowning, and turns him around.
Samyaza turns around and looks into the large bathroom mirror.
He frowns, and nods. He closes his eyes.
Yes, that’s what flogging does to you but I’ll be ok. I understand why she’s so upset. I need to convince her that I’m going to be ok.
He opens his eyes and gazes into her eyes. He raises both hands and rests them on her trembling shoulders.
“Sweet Crystal, please believe in what I’m going to tell you. Remember that I’m an angel. Well, a fallen angel, and most important immortal. That means that I usually regenerate but I was without sustenance for such a long time that my energy is depleted. I need nourishment or blood to boost my energy. My body will regenerate soon as I have the power that I need.”
He looks deeply into her beautiful hazel eyes, reaching her soul.
She blinks rapidly and her tears fall down her face. She shakes her head, trying to understand what he told her.
“Yazy, I don’t understand how someone could hurt you so. It’s too painful to see. I hurt for you.”
Her tears continue to fall down her face and he pulls her into his arms.
“My sweet Crystal, please don’t shed your tears for me. I don’t deserve your tears. I promise you that I’m going to be ok.”
She buries her face into his sculpted chest. She rests her hands on his waist, sobbing. A few seconds later she pulls back to look up at him and blinks rapidly.
“Yazy, take more of my blood. I don’t mind. Please.”
Samyaza raises his black eyebrow and his violet eyes glow.
“Sweetness, are you sure? I don’t want to hurt or scare you.”


Enjoy the trailer!
You'll love it!
https://animoto.com/play/UvFY1rdPrM7yp1fRp4rIvA
Posted by Gia Guido at 8:43 AM