Blog Tour for My Salvation by Michelle Dare 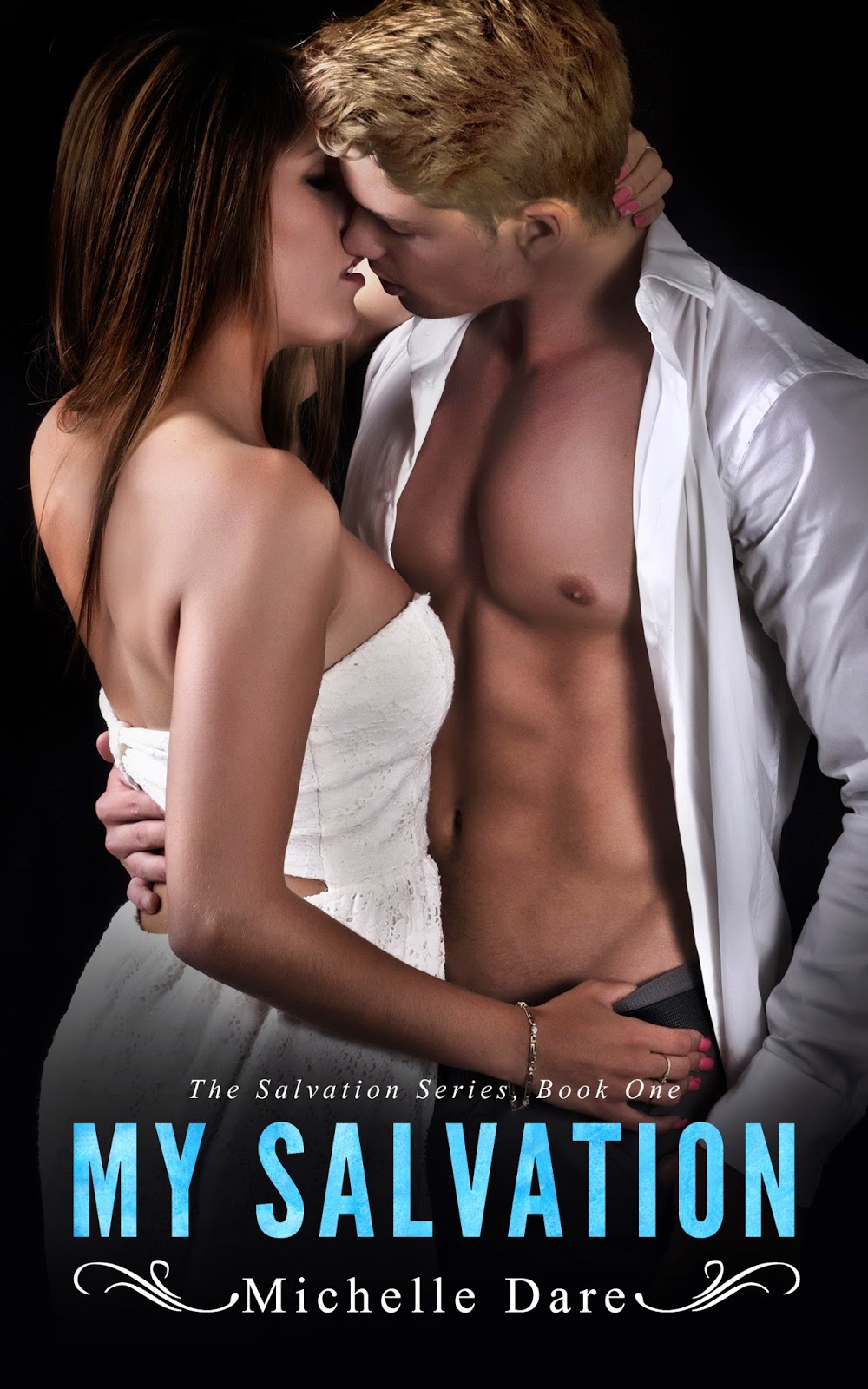 Synopsis:
Caliana Crawford is smart, sexy and unemployed. After quitting her mediocre job, she finds herself in need of a break. She goes to the one place that holds her most precious memories, her cabin by the lake. Life hasn’t always been easy for Cali. She lost someone close to her, was betrayed by her lover, and now she only wants to escape reality. What she doesn’t plan on is her sexy neighbor, who has an agenda of his own.
Owen Matthews goes through the motions every day, but knows his life is missing one essential part - Cali. He has never forgotten about the summers he spent by the lake with the gorgeous brunette. When he sees she is back to stay, Owen knows he can’t let her slip through his fingers again. Others think he has it all with owning a multimillion dollar company, but what they don’t know is that he would give it all up to have her in his arms and his bed.
The road to happiness isn’t always easy. His brother returns to his life and brings with him an old flame who threatens to rip Cali and Owen apart. Will they find their salvation with one another or let the events of their past influence their future?

Excerpt:
Excerpt 1 -
When Cali reached the main living room she saw him out on the deck. He was setting out breakfast for the two of them. She stood in the doorway watching him.
He didn’t seem to notice her standing there. Her mind drifted, wondering why Owen wanted her, what he saw. No job, not even looking for a new one, but what she did have was a huge heart and the man in front of her was taking more and more of it.
Owen was placing food on plates. He was wearing a dark olive green t-shirt and khaki shorts. The way the shirt clung to his muscular arms with each movement made her hot all over. Roving over his body, her eyes moved to take in the shape of his firm ass and his strong legs. This man could knock someone out with one punch, she thought.
She stepped onto the deck, her sandals making a soft clap on the wood. Owen looked up and a warm smile lit his face. Not knowing where they were going she chose a soft pink tank top and white, cotton shorts. She loved the way he looked at her, taking her in. The look made her feel sexy and wanted.
When she reached him, he brought his hand up to brush one of her curls from her face. “You are gorgeous and you’re mine.”
Cali nodded. “All yours.” He took his thumb and brushed the soft pad over her lower lip.
“Let’s eat before I take you down to the pool and have my way with you.”
“Hmmm,” she said, acting like she was deep in thought. “Maybe we can take a dip later. Might be fun.”
“I’ll hold you to it. Now sit and eat. We have a reservation to keep.”
“Where are we going?” she asked.
“Haven’t you learned yet? I like to surprise you.”
Mumbling she said, “I hate surprises.” But he heard and laughed.
They ate breakfast while watching the waves gently lap the shore. A light breeze was blowing causing the palm trees to rustle. Cali could see a couple of sailboats out on the water. She was mentally etching the moment into her memory, not wanting to forget a single minute of the trip.
Owen kept her on her toes and she was starting to like it. He was always moving. She usually preferred more of a schedule, a routine. To know what every day held.
Before, all of the surprises and spontaneity would have driven her crazy, but she was learning to relax and go wherever Owen wanted. The way he took care of her, always thinking of her needs, she felt like she was in a dream, waiting to wake up. 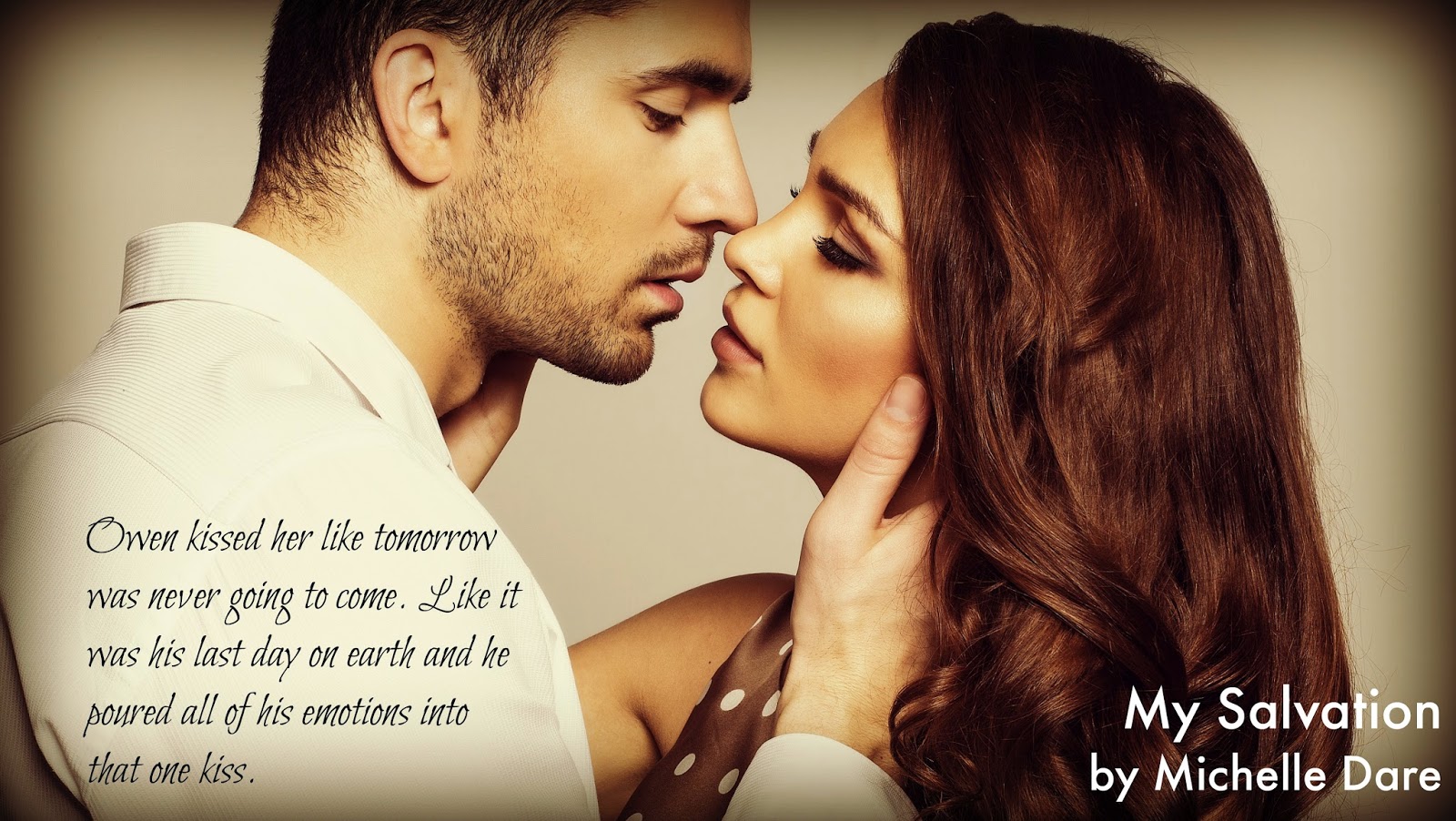 Excerpt 2 -
“I would love to do something tomorrow night though. Any ideas?”
“As a matter of fact, I do have one. Not telling you, however,” he said and stuck his tongue out at her. She moved fast and caught his tongue between her lips, sucking on it gently. Owen pushed her onto her back, bringing her hands up to pin her to the bed.
“Want to play, do you?” Holding both of her wrists in one hand, he used the other to tickle her side. Cali was laughing so hard she had tears falling from her eyes. She brought her legs up to try to push him off. Both of his legs positioned on either side of hers, making it impossible for her to do more than wiggle. He pressed himself down on her and she could feel that he was hard.
He ground himself against her while licking and sucking on her neck. Moving his hands to pull her shirt over her head, he unclasped her black bra. Owen shifted enough so she was able to capture his waist with her legs. The little bit of teasing from him made her fill with want and desire. His head lifted and she opened her eyes to look at him.
“I want you, Caliana.”
“You have all of me.”
He stood to remove his pants and briefs. Her shorts and panties came off. Owen stayed where he was and took ahold of her legs, dragging her to the edge of bed. He reached down and used his thumb to spread her wetness. Grabbing his cock, he slowly pushed into her.
Cali moaned, playing with her nipples, pinching and tugging the stiff peaks. She was never shy when it came to sexuality and knew her body well. She knew what would make her come fast and what to do to prolong the climax.
However, with Owen she found herself having little control over her orgasm. When she would move to slow the pace he would shift and she was unable to fight the feeling.
“You touching yourself is really fucking sexy.”
He lifted her legs to grasp behind her thighs, controlling the movements. He was deep inside of her and her body had to stretch to take all of him. She watched as the muscles in his chest and stomach flexed with his movements. The way sweat trickled down his face to his chiseled jaw.
Owen stroked her clit causing her to fist the bedding and writhe under his touch. No longer able to focus on his movement, she let the sensation take over. His every touch sent a current through her.
He was breathing heavy. She loved the way his body reacted to her. The feeling of him hitting the perfect spot within was driving her mad. She moaned causing Owen to quicken the pace.
A couple more thrusts and she let go. Her body convulsed in ecstasy. Owen pulled her hips higher and found his own release. He called out her name as he jerked inside of her. She went lax on the bed, recovering from another blissful encounter with him.
“You are amazing.” Each word was said in between breaths.
“As are you, Mr. Matthews. Now tell me more about this idea you have for tomorrow night.” 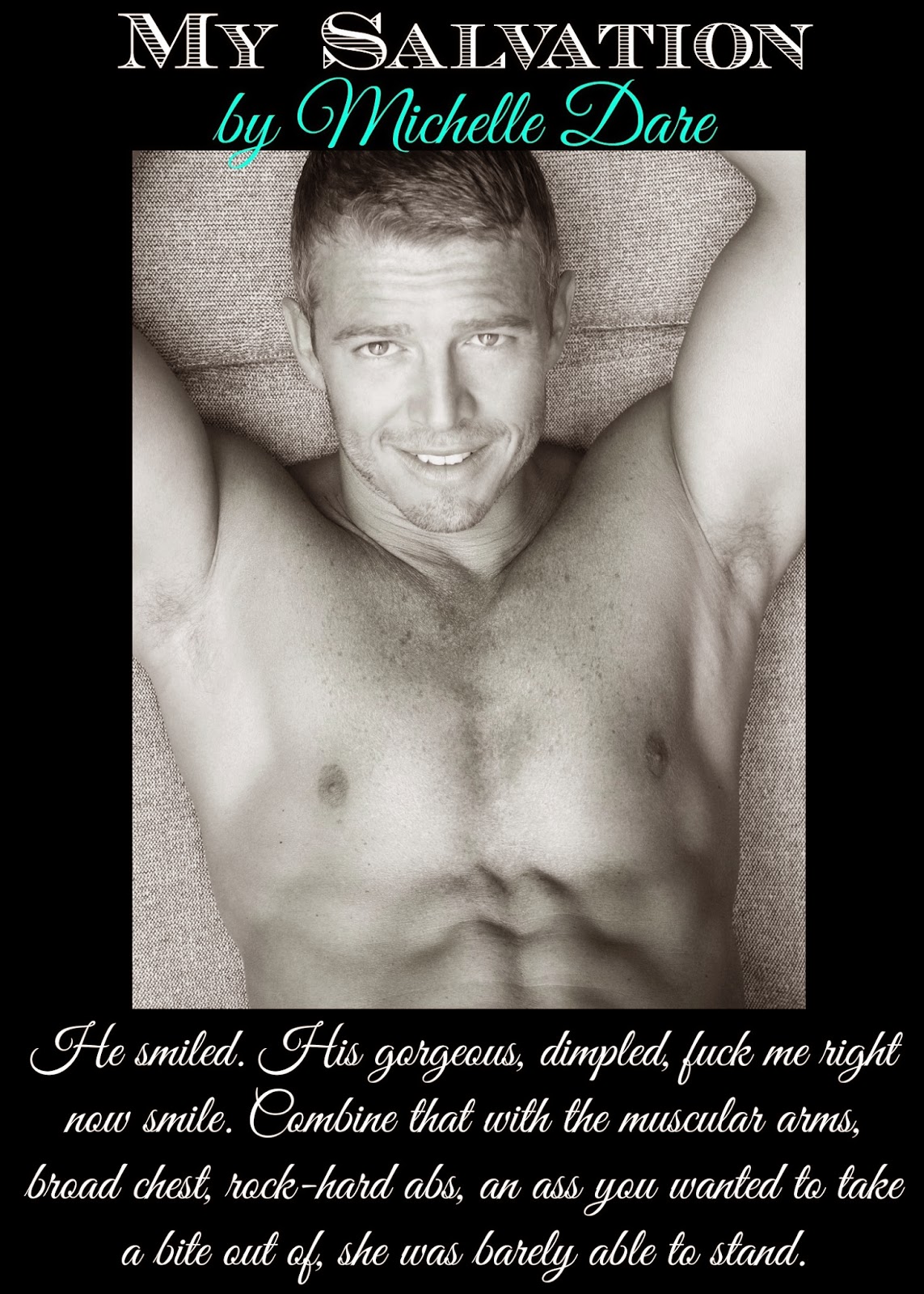 Excerpt 3 -
The sound of footsteps on the hardwood floor made Cali sit up. Looking toward the doorway, she saw Owen walk through. He walked to her in a few long steps. She stood on the couch and leapt into his arms, sobbing. He held her close, whispering calming words into her ear.
“How bad was it?” she mumbled into his chest.
“The back half of the cabin is gone. No one was there when the police arrived, but they did find something.”
Cali pulled back to look in his eyes. He eased her to the floor and they both sat on the couch. She noticed Adeline had left the room, giving some privacy.
“What did they find?”
“A broken picture frame was laying on the floor inside the cabin near the front door.”
“Why would that be significant?”
He took a deep breath and let it out. “The picture had a red X spray painted over it and the picture was of you. A picture I had taken during our last summer together.”
In a shaky voice, she said, “Me?”
“Yeah. And the worst part is I didn’t have the picture out in the open. I had it tucked away in the dresser, beneath clothing. Whoever it was that found it, put it by the front door on purpose.”
She started sobbing again. He was trying to soothe her the best he could. Gathering her in his arms, he brought her into his lap. She laid her cheek to his chest, her tears wetting his shirt.
“What have I ever done to make someone hate me so much? I don’t understand.”
“You didn’t do anything. The person could be after me, not you. They are just going after you by association. We’re not sure. But Cali, I would never let anything happen to you. Ever. I will protect you with my life and now Steven and Erik will do the same. You are safe with us.”
She nodded, not able to say a word. He held her for what felt like hours. She couldn’t move, only hold on to him and cry.

Review By Gia:
I loved the beginning of this book.   The first scene of the book in Cali quitting her job.  I loved the way she quit.  I know I was going to like her just from reading that.  It makes it easy to relate to her.
After leaving her job she goes to stay at her cabin.    There she see Owen.  Owen has gotten a lot hotter than the last time she saw him.  They have great chemistry.  Cali is struggling with what to do next in her life  after quitting her job and Owen is pretty well off with a good  job.  They make a good pair.
I did start to get a little bored at one point in the story but that didn't last long.   Michelle Dare does a good job writing the story because when there was a little lull in the story it was followed by an event that kept me interested and wondering what was coming next.
4 Amazeballs Stars!! 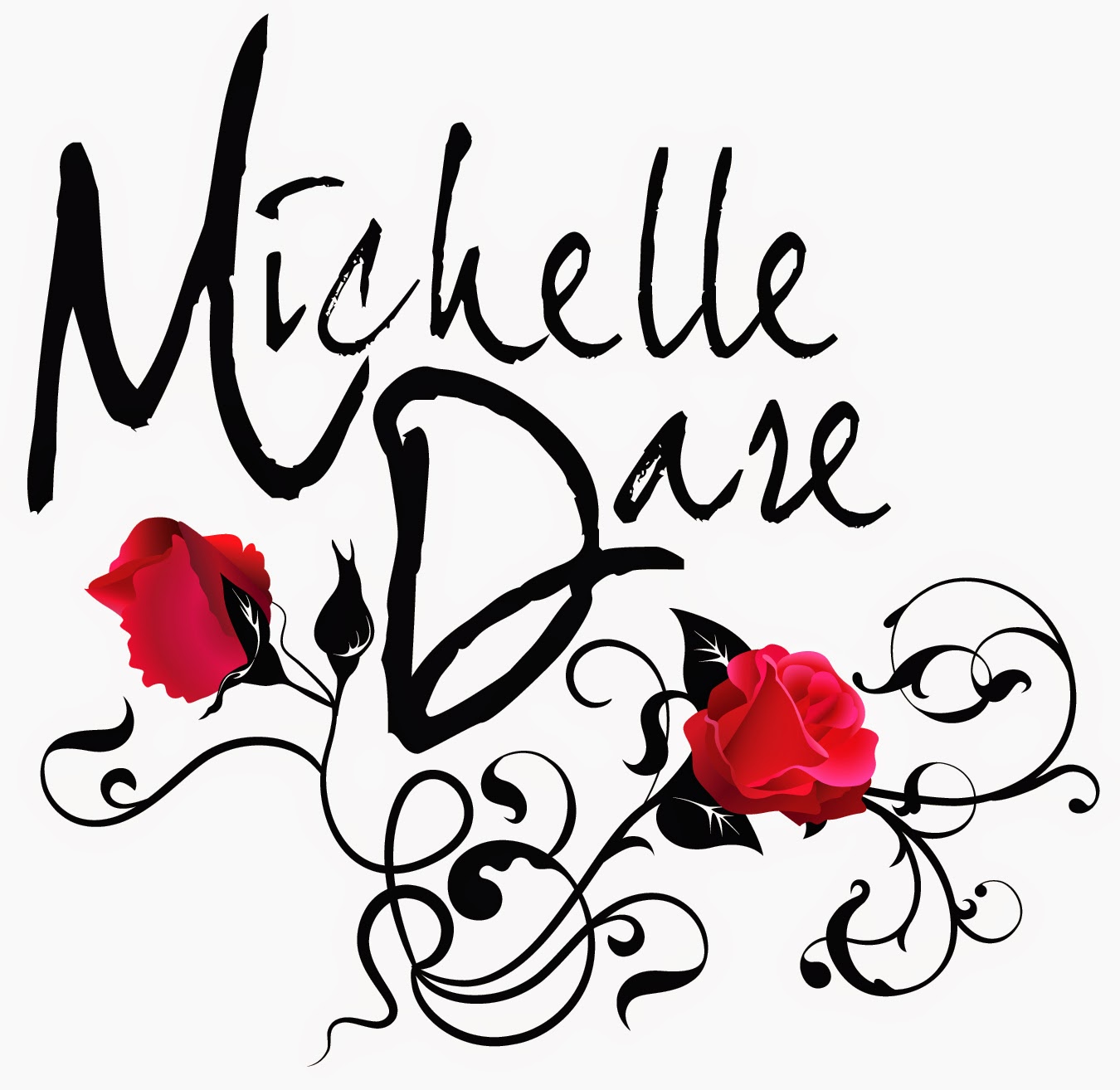 Michelle Dare is a Jersey girl living over the border in Pennsylvania. She started out as a reader, then became a book blogger. She loves the book community and thought to try her hand at writing. Her first book, My Salvation, is a contemporary romance.
She is a married mom with two wonderful children and a German Shepherd, who she considers her third child. She is a lover of books, music and movies. Her favorite band is Maroon 5 and has too many favorite movies to list. Paranormal romance is her favorite genre to read.
Facebook | Twitter | Website | Goodreads