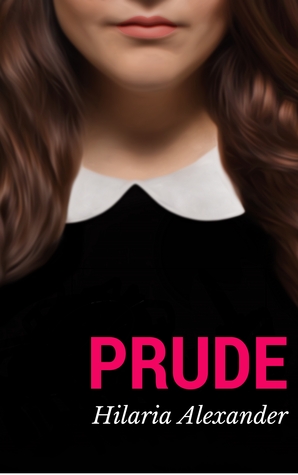 by Hilaria Alexander
Prudence Clearwater is a young adult writer facing the many changes of the industry and of the literary genre she's known for years. As she parts ways with her publishing company, she tries to rebuild her career with the help of Ben, a charming literary agent who might be looking for more than just a commission. As their friendship blooms, will Prudence accept to work with Ben, and will she be able to resist his charm? 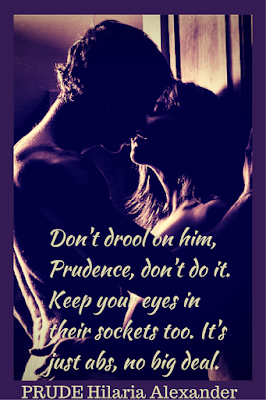 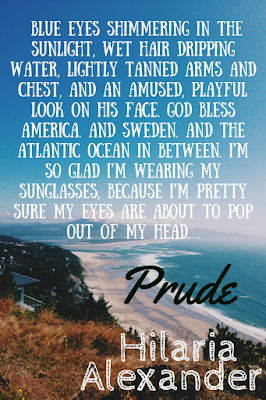 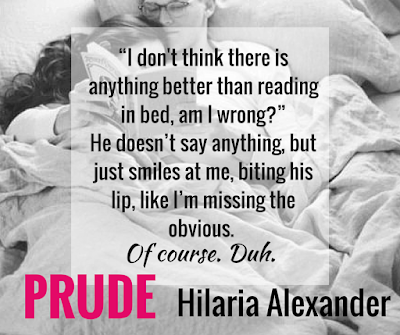 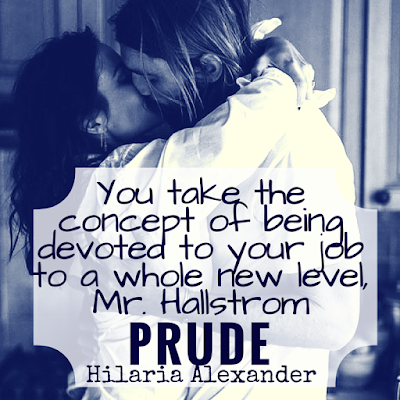 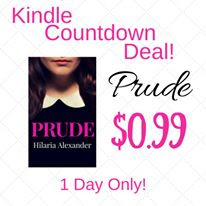 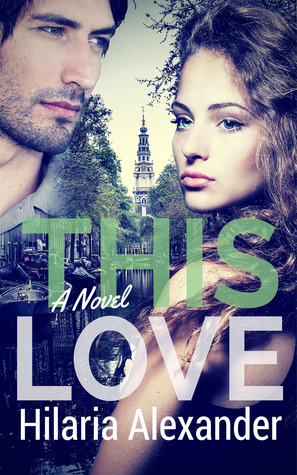 by Hilaria Alexander
Running off to Amsterdam is the best decision Ella ever made in her life. In just a few months, she’s been able to put her past behind and has found a new family and friends. She can almost ignore the voices in her head telling her this idyllic scenario is temporary.
When Lou Rivers shows up in Amsterdam, he’s the constant reminder of the life she led and the mistakes she made. As the two of them embark on an emotional and musical journey across Europe, Ella will have to face her own insecurities and make a decision that might break them apart forever. 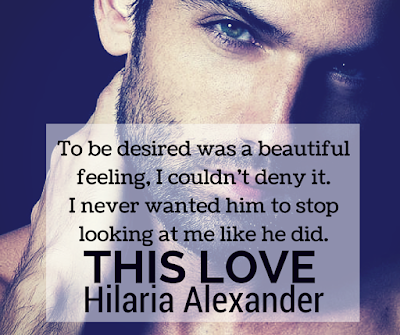 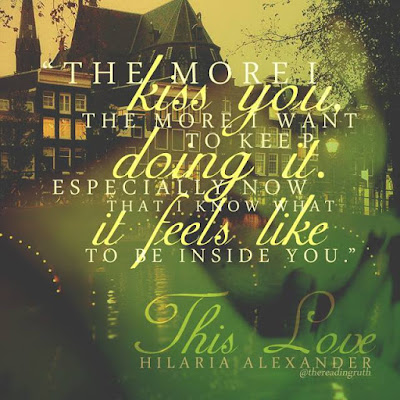 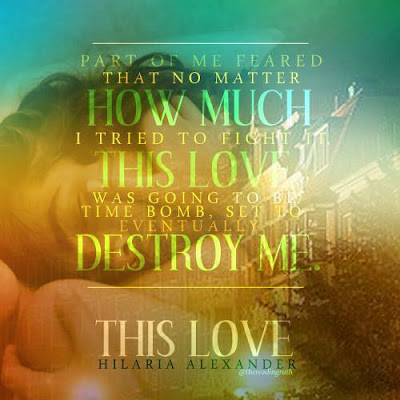 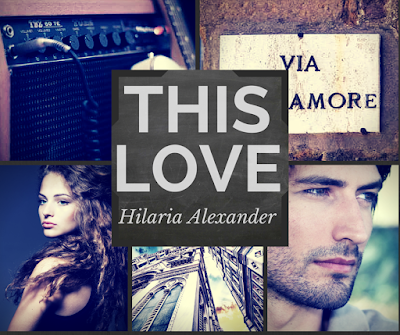 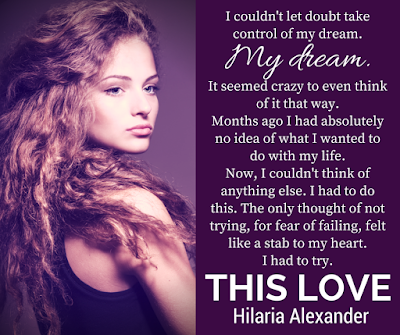 Hilaria Alexander is the author of Prude and This Love. She was born and raised in the south of Italy, where her family still lives. She attended college in Naples, Italy, and spent one year in Tokyo, Japan, as part of an exchange student program because she was crazy enough to pick Japanese language as her major. She now lives in Oklahoma City with her husband and kids.
When she isn't at work, she is reading, catching up on her favorite TV shows and coming up with new stories she doesn't have time to write. She loves traveling and is a self-proclaimed concert addict. If you have questions for her, including how an Italian ends up moving to Oklahoma, ask her on Facebook, Twitter and Instagram.

Her second novel, This Love, was selected as one of the finalists for Kobo and Mills & Boon "Romance Writing Life Competition".
She didn't win, but it was very exciting to be one of the ten finalists over almost five hundred entries!
http://kobowritinglife.com/2015/09/22/romance-writing-life-shortlist-announced/

1.    Can you tell us a little about your books?
I write contemporary romance and my characters are usually around thirty-years-old.
My first novel, Prude, is about a young adult author, Prudence Clearwater, who gets told she needs to “spice up things” because the industry has changed, and young adult nowadays is a little more “daring.” She decides she’s better off on her own, doing her thing, and soon after starts working with Ben, a book agent whom she's known since college. Ben is supposed to get her a book deal with another publisher, as Prudence deals with writer's block and tries to figure out if she wants to stick with young adult or explore other genres. Ben is also a surfer, and the story takes place in New York and Montauk. It’s a fun, sexy read.
My second novel, This Love, is about Ella, a musician who decided to travel to Amsterdam on a whim, in an attempt to distance herself from her controlling parents who had her career mapped out for her. She starts working as an au-pair for a family who runs a breakfast place and although happy, she’s a bit “stuck” with her life. All changes when she meets Lou Rivers, who just like her, came to Amsterdam to escape. Lou is trying to get over the demise of his marriage and is supposed to focus on recording a new album. He and Ella don’t  start off on the right note, but soon enough becomes evident they both need the other.
2.    What inspires you to write?
Reading to me is an escape. As a writer, I get inspiration from music or articles I come across. I also follow the advice many writers give: write the kind of story YOU would like to read.
3.    Do you have a favorite spot to write?
I don’t have a writing cave or a desk. I mostly write in my bedroom, or I use my fitdesk so I can pedal and write all at once! ;)
4.    Do you have a favorite character to write about?
I think it’s hard for an author to say if they have a favorite character or a favorite couple. I like giving my stories a good “send-off” and I’m not a fan of sequels, but now I see how authors get attached to their characters. I miss my characters. I’m excited I’ll get to “see” Ella and Lou in “Not About Love,” a stand-alone about two supporting characters I introduced in “This Love”, Ally and Boyd. But from time to time I also start thinking about Prudence and Ben from “Prude”. I miss them. Maybe if I can find the time, I’ll write a Prude novella, but for now, I have other stories I need to write. I’m working on a book, and I have plans already for book number four, five and six.
5.    If you could spend 24 hours as a fictional character, who would you chose?
After careful consideration, I’d have to say I would like to spend 24 hours as Claire Fraser from Outlander. I’m sure I don’t need to explain why. #24hoursmarriedtoJamieFraser
6.    Do you work with an outline, or just write?
I’m working on my third book, and I’ve tried following an outline, but I still can’t bring myself to write one and follow it. The plot of my story shapes as I write and changes a lot. I also have to accept the fact that I like to write out of order. I’ve already written the epilogue for my work-in-progress, but I still need to write about thirty percent of the story.
7.    What's one random fact about yourself that you can share?
My husband and I met on the Internet in 2003, back when it still was “crazy” to meet someone on the Internet. Plus, at the time I was living on another continent altogether. We’ve been together ever since.
8.    When did you know you wanted to write a book?
I was in a book rut, and I couldn’t find the right story to read. As much as I love New Adult, I wanted to read a fun story with little angst and with characters closer to my age. I kept reading stories about traditionally published writers who were told at some point their writing or their books “weren’t good enough” and that’s how the main idea for Prude came to life.
9.    What are you working on next?
I’m writing a book called “F U Cancer”. The heroine, Lucy, is a divorced mother of two battling breast cancer. I know that breast cancer patients love reading romance novels, but so far I’ve struggled to find a book with a heroine fighting the disease. All the cancer books I’ve read don’t end well. Where are the stories of cancer survivors? I’m hoping to publish it by late December.