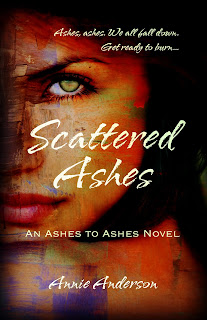 SCATTERED ASHES by Annie Anderson
Genre: Paranormal Romance
- SYNOPSIS -
Aurelia Constantine is having a rough century.
Plagued by visions of murder, death and destruction, she has resigned herself to the nightmare her life has become. When an enemy from her past comes to her rescue, she must let go of old wounds and heal the breach so she may survive the evil poisoning her mind.

Rhys Stevens is guilty.
Murder. Betrayal. Treason. Take your pick; he’s guilty of them all. On the path of redemption, he must beg for forgiveness from the one person he fought to save - the woman he has always loved.

Thrown together in the trenches of war, they must work as a team to stop a monstrous puppet master from pulling their strings.

Ashes, ashes. We all fall down.
Get ready to burn. 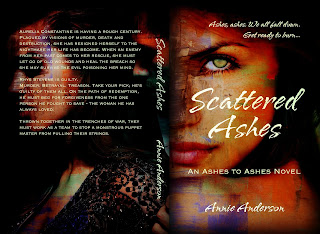 - EXCERPT -
You’d ask what kind of psychic I am. Well, I’ll tell you: I’m the shitty kind. I see maybe ten percent of what I should, and I can’t change a fucking second of it. I see what I see, and then I brace because it’s going to happen. There isn’t a thing I can do.

Believe me, I’ve tried. It’s a waste of time, and it weighs too much on my heart.

And on my mind.

Let’s not forget about the tenuous hold I have on sanity. I just thank the universe I live alone now. How many times could I have woken a roommate, looking like a horror movie reject before I booked a one-way ticket to a padded cell? I’ve already lived through one involuntary incarceration under an insane Primary’s thumb; a repeat stay is not in my future.

I’d rather chew a bullet.

Hiding my abilities when under constant surveillance is almost impossible. I’m a Seer, born with the ability to observe things that will come to pass in vivid Technicolor inside my little noggin, hence that lovely dream. I also sometimes randomly electrocute people without meaning to. Well, sometimes I mean to, but not all the time, and that is pretty scary. If people weren’t already looking at me funny before, which they are because as a Seer, my eyes freak people way the fuck out, they would after I zapped the crap out of them randomly.

Then there’s the phasing. As a fledgling, I sometimes transitioned from my resting form to the ethereal without even trying. Meaning, when I got angry or upset, I would burst into flames, and my wings would pop out. I got angry a lot in those days.

Yes, I am a bloodthirsty little thing. No, I don’t have any problem inflicting violence when I deem it necessary. Yes, ‘when I’m pissed’ falls under the necessary column.

Okay, I should explain the eye thing. You see (pun intended) my eyes are a very pale, milky green. All the time. You remember old westerns where the old guy is blind, and he has those freaky eyes where the iris and pupil nearly blend into the sclera? Yep, you guessed it, that’s what’s going on here.

Only I’m not blind.

And I wear contacts when I go outside because if I don’t people assume I’m blind, for one, and their face says they are squicked way the hell out, for numero dos. Also, when I’m pissed they kind of, well, glow.

So the fact I’m not exactly human is really fucking obvious.

Hello, my name is Aurelia Constantine, and I am a Phoenix. 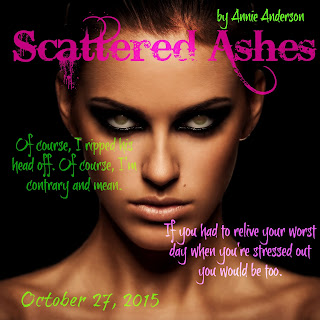 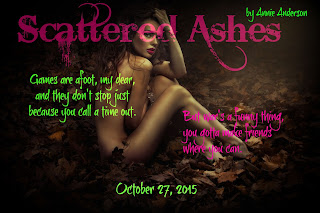 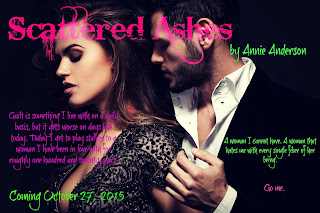 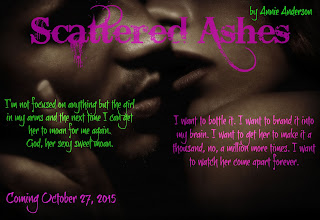 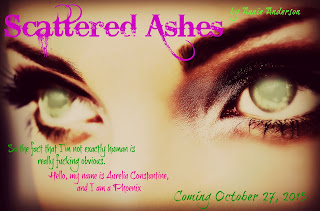 - ABOUT THE AUTHOR -
ANNIE ANDERSON 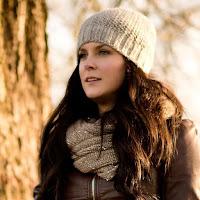 Annie Anderson is originally from Dallas, Texas but has lived in England, Las Vegas (because Las Vegas and the state of Nevada are two very different places), New Mexico, Illinois, Florida and Georgia. As soon as the military stops moving her family around, she’ll settle on a state, but for now she enjoys being a nomad with her husband, two kids, and an old man of a dog.

This tour is brought to you by: