Review for Scandal: Part One by Alison Foster 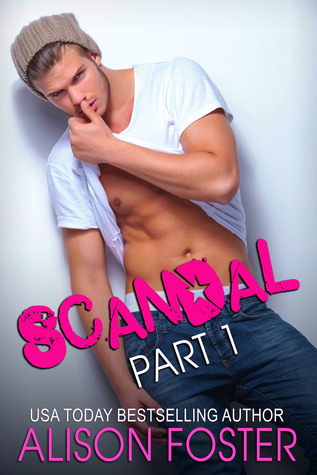 
Synopsis:
Ella Wade knew working at a website called The Daily Scandal might lead to an interesting summer job after graduating college. She did not know that one big mistake would pull her into the heart of a sleazy world of publicity where truths are worse than lies and a murderer is on the loose.

When Ella gives into temptation and sleeps with her stepsister Madison’s ex, her world flips upside down. It doesn’t matter that Madison is dead or that Jaxson Cole wasn’t, in fact, her boyfriend but a publicist’s stunt to link two of the hottest catwalk models romantically in order to feed tabloid curiosity. The damage is done and with deadly consequences.

Even worse, Jax definitely knows things he won’t say. Falling for his epic hotness could mean one good screw will screw Ella for a lifetime.


Review by Gia:
Scandal is part one in a three part series.  This one is a short quick read that ends in a cliffhanger.  I knew there would be a cliffhanger because it's part one but I didn't expect it to but such a big cliffhanger.  I immediately wanted to read part two but I thought I would write my review for part one first.
Ella works for The Daily Scandal.   She's not a sleazy paparazzi.  She is caring and kind hearted.    Her former step sister, Madison, is a Hollywood star and is killed.  Ella ends up investigating the story for The Daily Scandal.   During the investigating she meets super sexy Jaxson Cole.  Jaxson is Madison's ex.  There are some many things wrong with Ella starting a relationship with Jaxson.   Some things about Jaxson seem off.  The cliffhanger at the end is crazy and I'm off to read part two to see what happens next.
4 Amazeballs Stars!!

About Alison Foster:
USA Today Bestselling author Alison Foster loves reading a good love story almost as much as she loves writing one. She spends her time dreaming up strong heroes and even stronger heroines and she enjoys finding unexpected strengths within her characters when they are in the most unexpected places.

She believes that passion makes the world go round and that a sexy grin is as sweet as candy. She loves interacting with readers, so feel free to drop her a line.
Posted by Gia Guido at 5:28 PM