Release Blitz for From the Wreckage by Melissa Collins

From the Wreckage by Melissa Collins is NOW AVAILABLE! 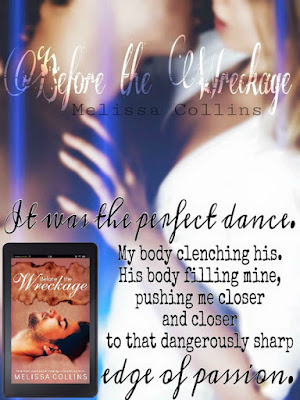 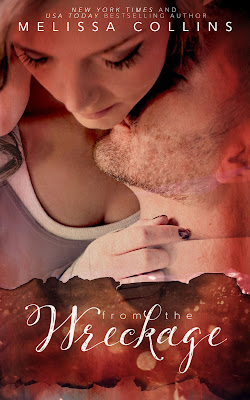 SYNOPSIS:
First, he saved me. I lived because he was a hero. And then he was gone. Uprooted by the fire that destroyed our home, my family moved away and I never saw David Andrews again. Then, he found me. Eighteen years later, he rescued me again – in much simpler terms, of course. By loving me, by giving me the fairy tale I’d always hoped for, he provided me with the perfect life. Now, he needs to be saved. It’s my turn to be strong, to be brave, to be valiant. When flames threaten to turn us to ashes, it’s up to me to pull us From the Wreckage.

Review by Gia:
Wow, From the Wreckage had me hooked right from the beginning and I didn't want to put it down until I finished it.  It is definitely an emotional read.

Grace's family loss there house in a fire.  Before the fire they were close with their neighbors.  David helps find Grace on the night of the fire.  Grace's family moves away and they don't keep in touch the David's family.

Eighteen years later their paths cross again.   David has become a New York firefighter and Grace has just graduated from Graduate School.  Both have thought of each other throughout the years.    Their chemistry is great together.   They have missed a lot of time in each others lives but they still seem to fit perfect together.   Their road to love isn't without obstacles and oh there is major obstacle thrown at them.

They both have a great friend by their side.  David has fellow firefighter Ian as his best friend.  I loved Ian.  He seems likes the friend that you never know what's going to come out of his mouth.   Grace has Jade as her best friend and I loved her too.
4 1/2 Amazeballs Stars!!


And there's more! As a special THANK YOU to her readers, Melissa has put Let Love Be up for free, too! This is book 4 of The Love Series, but can be read as a standalone.

ABOUT THE AUTHOR:
Melissa Collins has always been a book worm. Studying Literature in college ensured that her nose was always stuck in a book. She followed her passion for reading to the most logical career choice: English teacher. Her hope was to share her passion for reading and the escapism of books to her students. Having spent more than a decade in front of a classroom, she can easily say that it’s been a dream. Her passion for writing didn’t start until more recently. When she was home on maternity leave in early 2012, she read her first romance novel and her head filled with the passion, angst and laughter of the characters who she read about it. It wasn’t long before characters of her own took shape in her mind. Their lives took over Melissa’s brain and The Love Series was born.