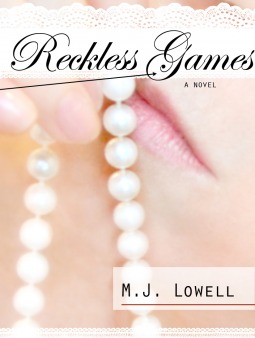 by M.J. Lowell
Synopsis:
There are all kinds of games.
Lucy Flannigan is in her last year of music school when she gets a call saying her brilliant inventor father has died. The police say it was suicide. Her gut says it was murder.

Exhilarating games.
Rhys Carlyle is a player in every sense of the word. He's built the fastest growing gaming company in the world, and he's not done yet. Ruthlessly ambitious, he has an insatiable appetite for power and beauty – and he lets nothing stand between him and what he wants. When Lucy saves him from a freak plot on his life, Rhys decides that what he wants is her.

Dangerous games.
Lucy suspects Rhys holds the key to the mystery of her father's death – but to unlock it, she’ll have to play his games. What begins as a quest for the truth quickly becomes something more – much more. Lucy is soon out of her comfort zone, out of her depth...

Reckless games.
...and intoxicated by a heady mix of desire, pleasure – and fear. By the time Lucy learns the explosive truth, it's not just her heart that hangs in the balance, it's her life.

There are all kinds of games, but they all end the same way: Game over

REVIEW BY TABITHA
This book definitely captured my attention from the very beginning. I was intrigued with the mystery of it from the get go. I love Lucy and how she is willing to do anything at all to find out what happened to her father. Even if that means walking into the fire with the most notorious playboy around, Mr. Rhys Carlyle. And man oh man does Rhys catch your attention. He is nothing short of intense and extremely hot. I kinda thought I had it figured out early on, but found myself questioning that a few times throughout. I wish we would have had a little more to the ending. I felt like there was this build up for a huge ending and wish it had lasted longer. It was like BAM then the end. For that reason I am giving this a 4 star rating.
A copy was gifted in exchange for an honest review.


About the Author:
M.J. Lowell is a Brooklyn-based writer, reader and pizza lover who started telling stories as soon as she could talk (sorry, Mom and Dad!). She enjoys falling in love, breakfast in bed, Hot Tamales candy, ice-cold Manhattans, and Pitch Perfect. Her inspirations include Meg Cabot, F. Scott Fitzgerald, Mary Stewart, Agatha Christie, J.R. Ward, Sylvia Day, and Princess Mononoke. She fantasizes about riding off into the sunset with a handsome French baron whose apartment has a bath tub and a shower, but until he appears she's happy spending her days with her French bulldog, Coco Chanel. Reckless Games is her first novel.
Posted by Tabitha Stokes at 7:00 AM