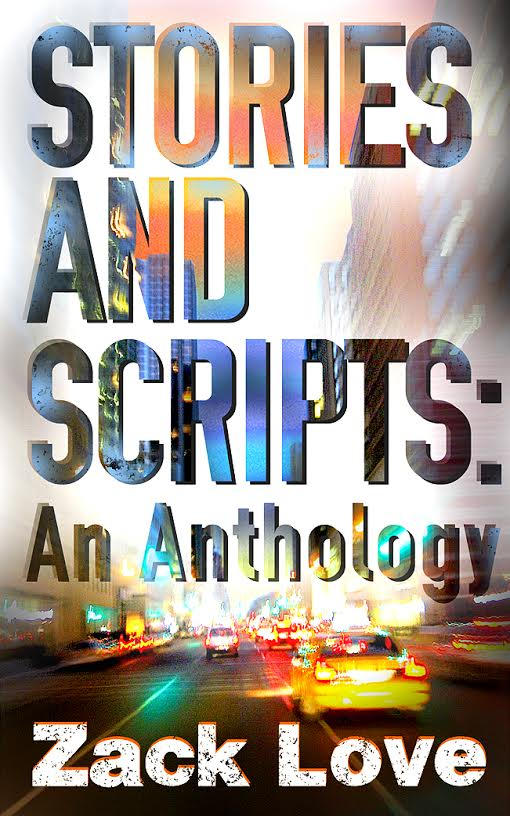 Thought-provoking, dreamy, sad, and hilarious, this collection of works by Zack Love takes you on a diverse and unforgettable literary journey through a variety of topics, themes, and emotions. The anthology totals about 73,000 words and contains a novelette, four short stories, a theater play, and a screenplay.

These seven spellbinding stories spanning several styles and genres include a dramatic romance, a satire of the mega-rich, a somber and soulful reflection on the problem of evil, humorous dating adventures, and stories driven by philosophical musings.

1) THE DOORMAN – A NOVELETTE

Alex seems to have it all: a great penthouse apartment, a lovely girlfriend, and a prestigious Wall Street job. But below the surface he is sure of nothing but his angst-ridden doubts. And when he realizes that his doorman may be God, or sent by God, he will question things like never before.

This novelette is a story of New York doormen, tormented love, empty office life, and the theological questions that arise in response to the horrors of evil.

Can love really conquer all? Rodney is a passionate black man with brilliant talents but a mental illness that leaves him homeless. Melinda is a white Manhattan law partner with an artistic soul, trapped by the pressures of corporate law, her wealthy father, and her three-year boyfriend. A charming, chance encounter leads to a magical courtship and life-changing choices that make an unlikely New York romance possible.

What happens when a man and a woman meet in a way that magically involves the entire universe? When both are so keenly aware of their place in the cosmos that their connection seems to transcend their union and capture the very essence of life. This story shows how each person is a world to be discovered and how sometimes, when two worlds collide, the universe seems that much smaller.

Have you ever been on a train, bus, metro/subway – or any other shared space with strangers – and started to wonder what that person right next to you is thinking? This story takes you on a journey into the mind of a man in a suit and tie on a New York City subway car, as he thinks about the woman standing awkwardly close to him. They are total strangers but their proximity is almost intimate as their hands share the same metal subway pole.

5) WAITING FOR 2000 – AN ABSURDIST COMEDY OF BILLIONAIRE PROPORTIONS

Inspired by and reminiscent of Samuel Beckett’s absurdist stage play “Waiting for Godot,” this Y2K theater comedy satirizes the frivolous extravagance of the mega-rich.

Bob’s Billionaire Boat boasts the world’s 2,000 richest people on it, and will enable them to celebrate the arrival of the year 2000 twice in a row by crossing the International Dateline on New Year's Eve 1999. The co-captains of the boat — two regular guys — keep themselves amused with endlessly silly banter while occasionally debating whether the whole thing is just a fictional stage play.

Meanwhile, two Wall Street traders who are bitter about missing the wealth cutoff for the billionaire cruise are determined to blow up the boat and thereby become the two richest people on earth.

In this satire, the zaniest billionaires ever to gather on a single vessel prove that there's still plenty to complain about at the top.

Sammy Laffowitz is legendary for his dating disasters and sex mishaps. This time, misfortune strikes on Valentine's Day – but with a fun twist that makes Sammy seem studly for a change.

7) MY WORST VALENTINE'S DAY. EVER. – A SHORT STORY

Yi Wang is a NY bad boy who plans to make history on Valentine's Day with his female exploits. The handsome, alpha-male, Chinese-American is a corporate lawyer who usually gets his way with women, but this time he makes one stupid mistake that leaves everyone but him laughing hysterically at his epic fail. 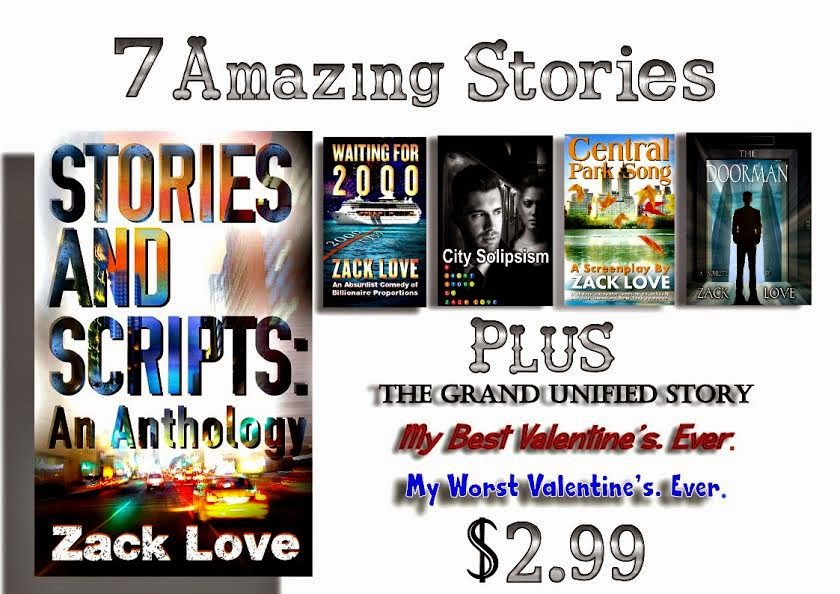 THE DOORMAN
Why was I going to watch my hairline recede in front of two-thousand-line spreadsheets staring at me from cold, glowing monitors? Why was everyone in my office apparently so happy to be spending so many hours there, when the things they really cared about – persons, pets, pastimes – were all relegated to a few photographs on their desks? That seemed to be the formula: spend the best years of your life in an office with photos of what you really care about.
CITY SOLIPSISM
Without lifting her eyes, she takes her right hand off the [subway] bar for a moment and gently – almost sensuously – rubs the arm holding her Time magazine. She puts her hand back onto the warm, slippery bar, a few centimeters below mine, so that if I’m not careful my hand could slide down onto hers with the fits and starts of our train. She’s still reading. I look at the people around me, and I think about how New York City is such a people city. Everywhere I look, there are people. There are so many people from so many places with so many stories that I wonder how they all manage to morph into this mass of anonymity...
CENTRAL PARK SONG
Let the park live in you until it sings you a song. Taste the air of dampened wood in your mouth. Hear the autumn leaves rustling in the zephyr of your mind. See the squirrels bounding across branches hanging from your thoughts. Let your soul frolic in the smell of the park’s grass. Touch every inch of the park that your memory can fly through as if you had only two more minutes to live. And let me take you out to dinner.
THE GRAND UNIFIED STORY
“It’s this awkward because this is only the second time that we’re together,” Steve thought. He remembered how banal their first meeting was: a silly conversation in the post office about how different their mail was (he was sending a copy of his doctoral dissertation in astrophysics to a university in California and she was sending a package with some of her artwork to her aunt in Brazil). But something felt special – almost providential – about their interaction. “And the serendipity required, for her to be walking along the Charles just when I was, even though she lives a good twenty minutes away, in Boston,” he thought.
WAITING FOR 2000
AL
BC? Is that supposed to suggest something about your age? Wouldn’t AD be a little more accurate?

BC [sitting down in SAM’s seat]
BC is for “Bien Chebere.” That means very cool, in case you’re too gringo to know. It’s also one of my websites. BC dot com. I also own Latina Queen dot com. And Caliente dot com.

AL
Oh yeah? Well, I want to get a website called “Fill In The Blank dot com.”

AL
How about “Everything’s Already Been Taken dot com?”

BC
That one’s already been taken too.

AL
How about “That One’s Already Been Taken three dot com?”

BC
That one’s still free.

AL
How are you such an expert on the availability of domain names?

BC
I think that one’s still free too.

AL
That wasn’t a website. That was a question.
MY BEST VALENTINE'S DAY. EVER.
Sure, I’m a balding, chubby, short actuary – but I’ve had some really studly moments with the ladies, and Zack very conveniently left those out of his book. So I’m delighted to open up a bit about these particular details, in honor of Valentine’s Day (when every balding, chubby, and short actuary wants people – especially the babes out there – to know about his studly past).
MY WORST VALENTINE'S DAY. EVER.
Yes, I’m a chauvinist pig. But I’m also in my twenties and living in New York, which doesn’t help. And if you ever disrespect one of my sisters, I will break your jaw. 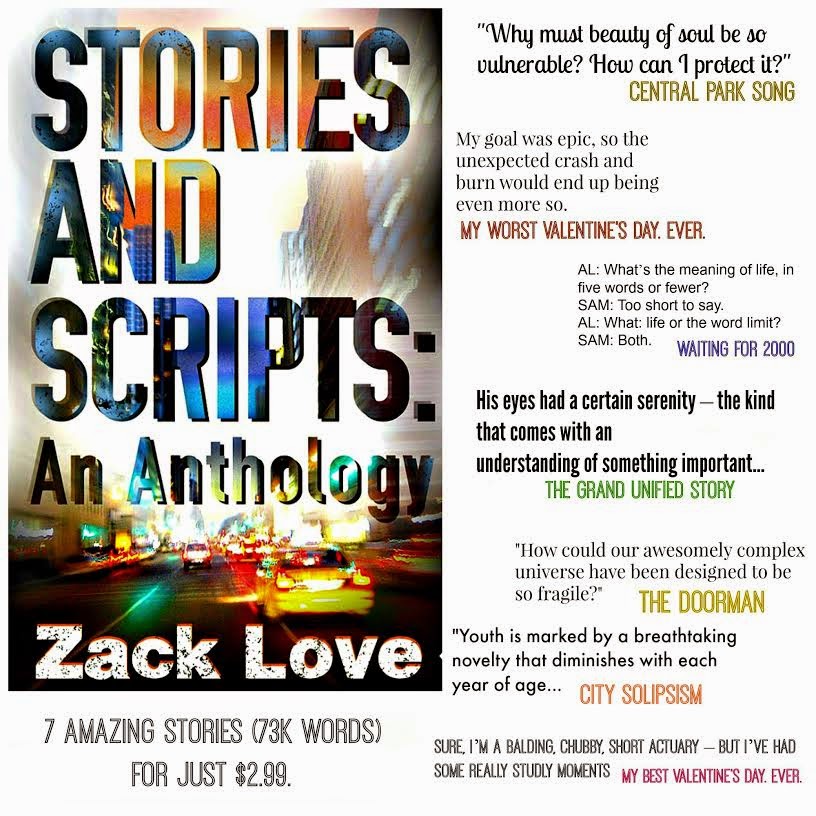