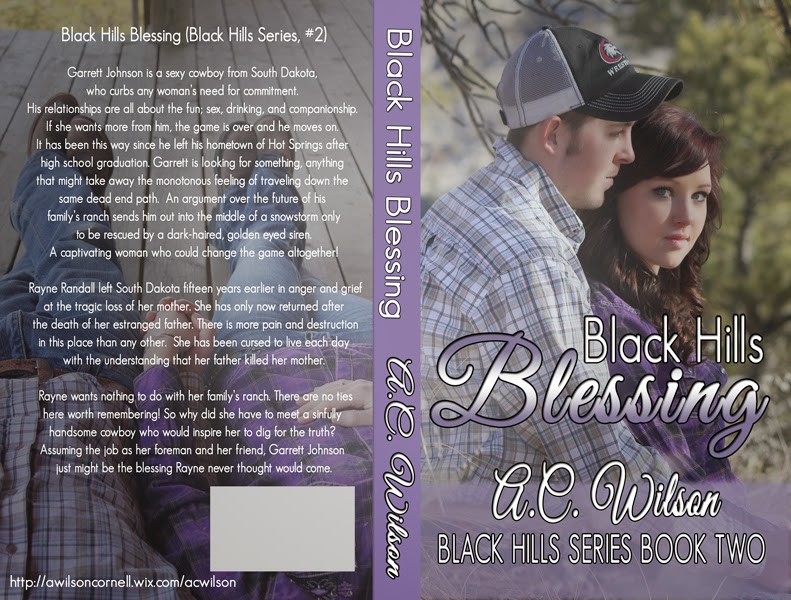 ~ Synopsis ~
Garrett Johnson is a sexy cowboy from South Dakota, who curbs any woman’s need for commitment. His relationships are all about the fun; sex, drinking, and companionship. If she wants more from him, the game is over and he moves on. It has been this way since he left his hometown of Hot Springs after high school graduation.

Garrett is looking for something, anything that might take away the monotonous feeling of traveling down the same dead end path. An argument over the future of his family’s ranch sends him out into the middle of a snowstorm only to be rescued by a dark-haired, golden eyed siren. A captivating woman who could change the game altogether!

Rayne Randall left South Dakota fifteen years earlier in anger and grief at the tragic loss of her mother. She has only now returned after the death of her estranged father. There is more pain and destruction in this place than any other. She has been cursed to live each day with the understanding that her father killed her mother.

Rayne wants nothing to do with her family’s ranch. There are no ties here worth remembering! So why did she have to meet a sinfully handsome cowboy who would inspire her to dig for the truth? Assuming the job as her foreman and her friend, Garrett Johnson just might be the blessing Rayne never thought would come. 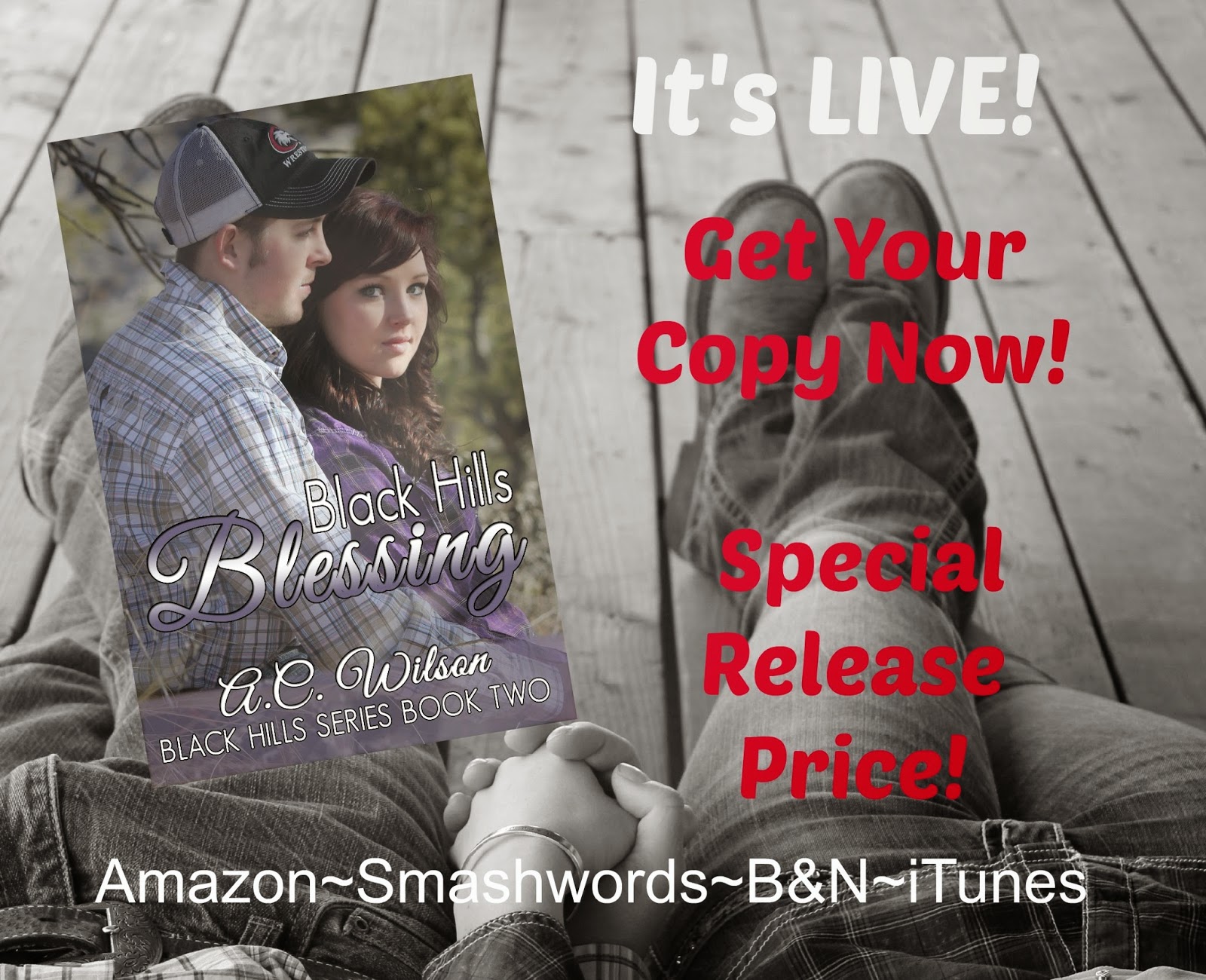 ~ Excerpt #1 ~
“I think God was punishing me. I don’t deserve to be loved.” She was so calm as she said the words. There was a weariness in her voice that spoke eloquently of a woman giving up. She was defeated and the defeat had hollowed her. No wonder she was angry and closed off. Garrett wrapped his arms tightly around her, hugging her body into his.

“You’re so wrong about that, Rayne. You deserve to be loved and cherished.” His chest felt like there was a heavy weight sitting on it. His throat closed with emotion. How could anyone think they weren’t worthy of love? How could so much destruction happen to one person? If Garrett had been in Rayne’s shoes, he would have raged and struggled just as she had. The mess was coming to life and he wasn’t certain how to fix any of it.

~ Excerpt #2 ~
How could someone she just met be so in tune to her mind? The Cowboy had her melting into his hands and soon she’d be begging him to do passionate things to her body. Hell, she’d beg to do unspeakable things to his! Garrett lowered himself to his knees and instinctively Rayne’s fingers interlaced in his dark hair. He pressed his lips against her stomach and groaned as her finger nails scraped his scalp. Feeling that exquisite heat so close to the spot she truly wanted him, Rayne felt her core flex and clench in demand.

Holy mother of all that was good! Garrett’s tongue laved just above her waistband of her pants as his fingertips slid her button free and opened her pants to reveal the black lace panties she had selected. In the back of her mind she had hoped he would see them. She leaned fully back against the wall and her hips thrust forward of their own accord. Every piece of her body and every inch of her skin begged to be touched. She felt his knowing grin against the top of her panties. Mentally she cursed her inability to deny him or better yet, to deny herself. 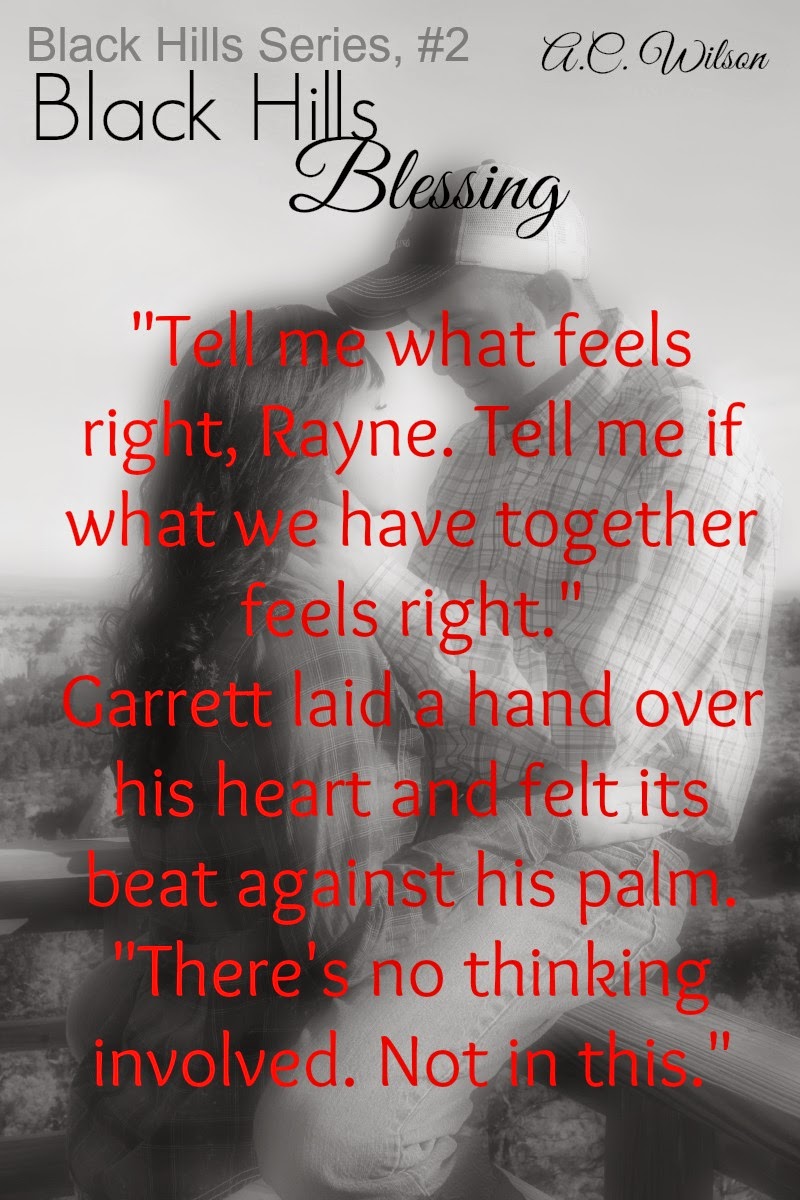 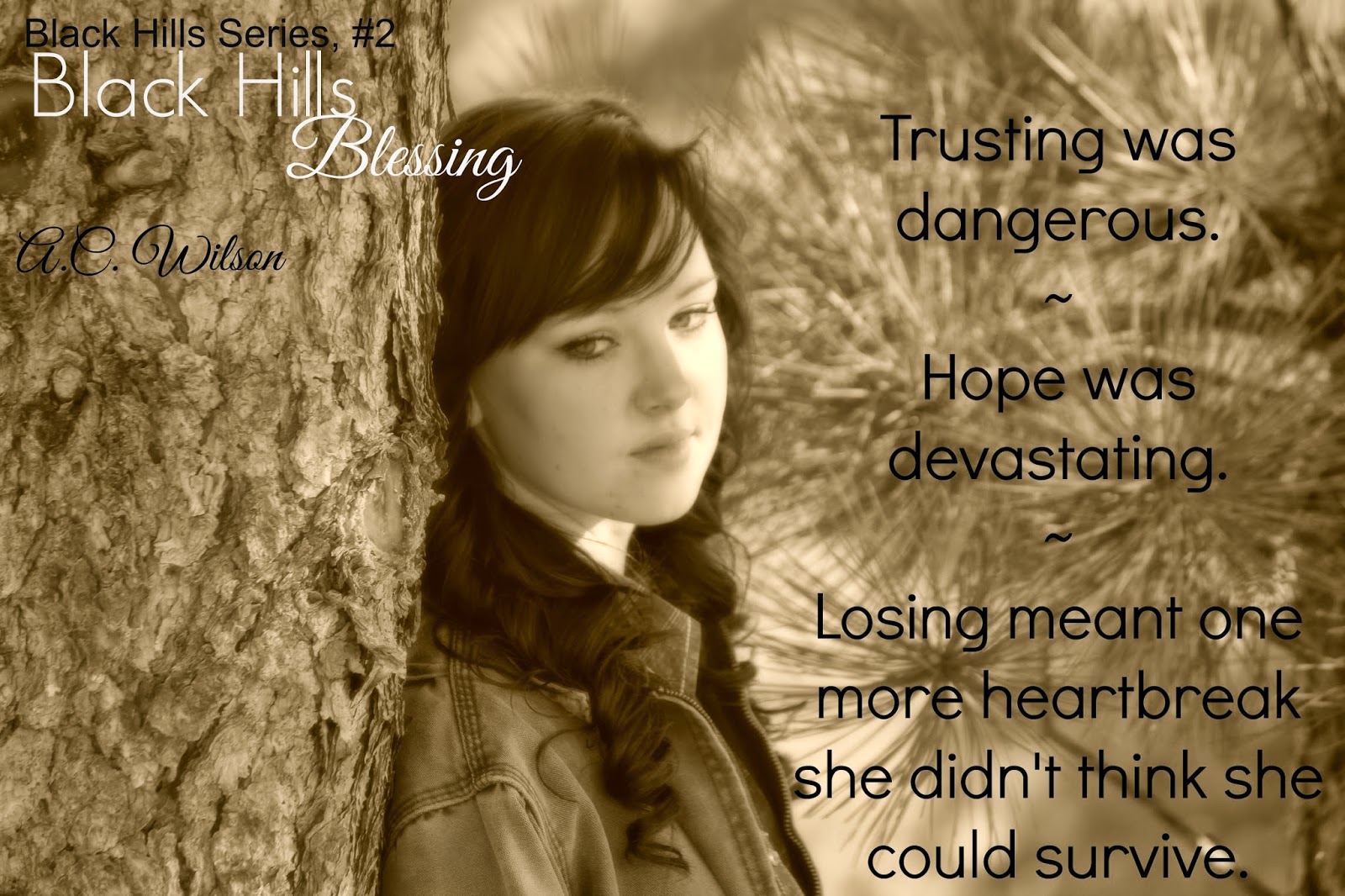 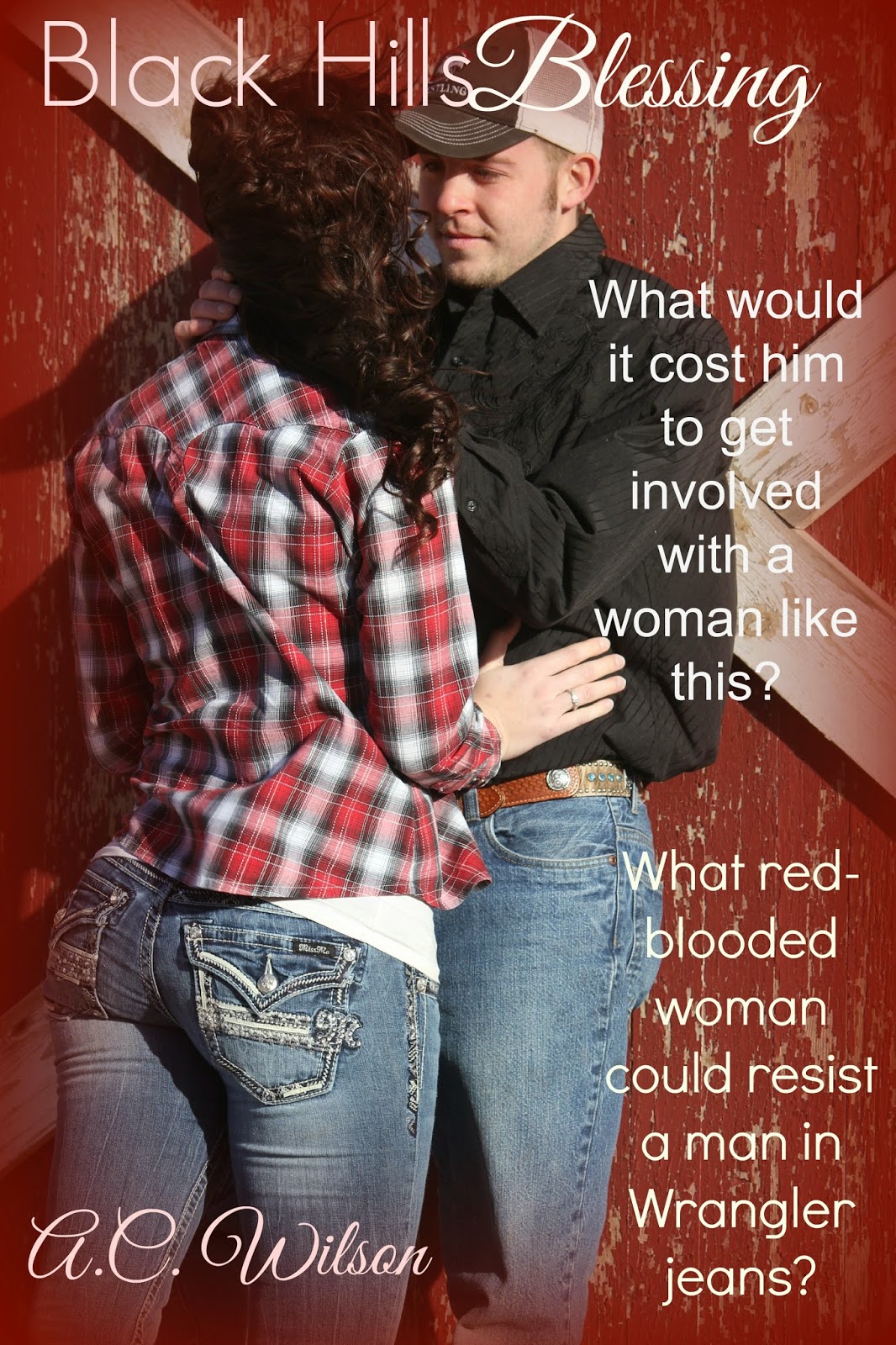 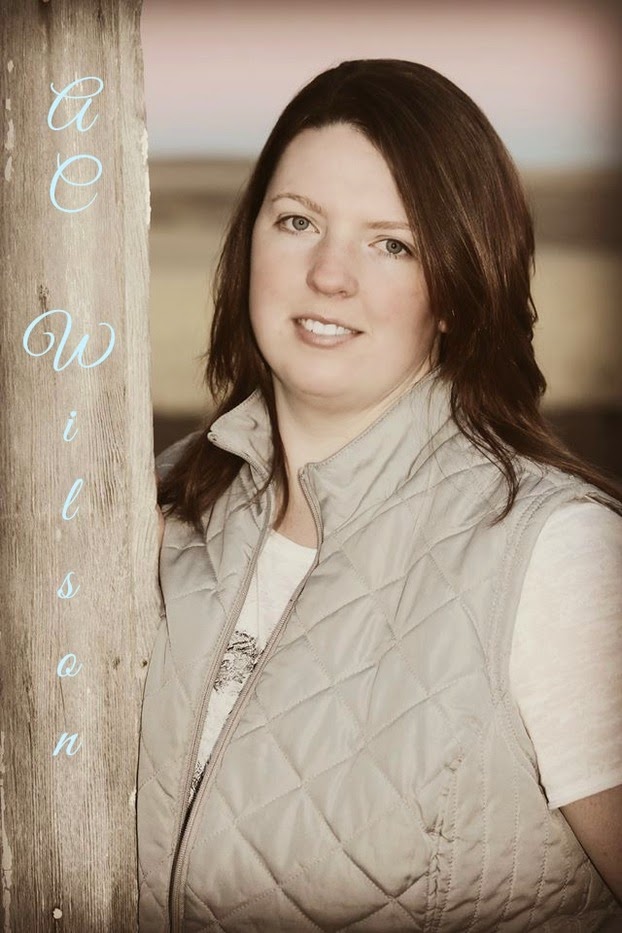 A.C. Wilson lives in Abilene, Kansas with her husband, two sons, and their chocolate lab. She loves to be outdoors, playing with her boys and absolutely loves to write.

Her first two books were historical regency romances, Rockwell’s Lady and To Right A Wrong. The Black Hills Series came from her mother’s idea to use Hot Springs, South Dakota as a home town for the Johnson family. Everything about the Black Hills is enchantingly rugged and of course, there are cowboys!