Series Main plot/theme: Nearly six thousand years ago a group of Sekhmet's personal guards stepped through a portal from Tuat (where the Egyptian Gods reside) to Earth after their king was killed. Their assignment was simple enough; find the leader and followers of Set's Legions who committed such a horrible atrocity and destroy them.

Sekhmet in her wisdom offered her blood to her elite force, which granted them immortality. Are they vamps? In a sense, but not in the traditional sense. They do require blood to survive and to keep them bound to Earth, but they can also walk in daylight, eat and drink normal food, go for long periods of time without digesting it, mate and have children. They can also die by being beheaded. Anyway, their purpose remain today what it was in the beginning. Living near Lake Michigan Sekhmet's guards run a world-wide protection agency, named Guardians Incorporated, more commonly called GI, where they protect the rich, the famous and the less fortunate from the Legion or ills of our modern day world. 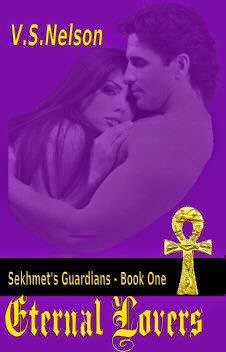 Book One - Eternal Lovers: Gabriel, their leader meets and falls hard for Jennifer, a young married Native American woman of twenty four. Jen has come to the area to seek the advice of her best friend. She blames herself for her failing marriage. Although she is attracted to Gabe, she is also afraid of his intimidating size (and manners) and has no intention of breaking her marriage vows.
Over time and because of the loss of his true first love, Gabe has grown hard, sometimes cruel and secretly wishes his enemy would take his head so he can leave this world for good. That is until he meets Jen and all hell breaks out.
Jennifer on the surface seems like any other half-breed Native woman with exceptional abilities. She's always been able to use her mind to communicate with animals, read other people's past lives and she has a few other tricks and secrets up her sleeve. She's assumed she inherited these gifts from her long since deceased grandmother, a Native medicine woman. Little does she know she actually inherited most of her secret talents from her birth father, a man, she never met.

Unaware to her, Ronan, her father, has watched her since her birth; keeping a close and protective eye on her. He remains in the shadows until Jennifer's life is at stake. Once Jen is on her road to recovery, she learns the truth, she is half Selkie. But not the Selkie we have all come to know and love through our European mythological tales but the Native version of this great shifter.

With the end of her marriage (will save that spoiler) Jennifer and Gabe set course on a romantic tale of their own. Gabriel soon discovers there is more to his attraction to Jennifer than he first suspected. She is in fact the reincarnation of his first and only love Akhakh, the woman he lost to the Legion in ancient Egypt and finally Sekhmet's prophecy comes full cycle. 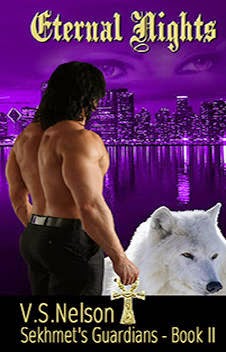 In the meantime, the war between the Guardian forces and the Legion heat up. While on a trip North, Raphael is wounded. The wolf saves his life but not until she stands on the threshold of death's embrace. And although it is the wolf lying on his chest in the remote forest, it is the woman of his dreams he sees and interacts with.

Meanwhile, the ghost of Jen's grandmother appears, who shares an incredible story with her. She has a sister and in order to save her life (born premature) her grandmother placed Jessica's life essence inside a tiny wolf cub then gave the cub to Jen. Sadly her grandmother passed before she was able to reverse the magic. She now asks Jen to undo what she has done. There are a few more ups and down in this story but in the long run, Jessica and Nowaki are both saved, Jessica and Raphael are united in a Happy Ever After and things are set up for book three. 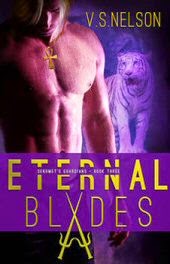 Book Three - Eternal Blades: Lance, (Gabriel's baby brother who is a computer geek) and Tshering Snow, a white haired beauty from the Himalayas take center stage in book three. As I previously mentioned there are more to these books than one romance. Tshering is introduced to the Guardians when she is rescued in Book two from the Legion forces. Lance is convinced she is the one he has waited his entire life for and although he has the reputation of a playboy, nothing could be farther from the truth.

Tshering, like most women, has a few secrets of her own, which is also revealed in Book two. Although she appears human, she is a were-tiger. Afraid the others won't understand she hides herself from the others, including Lance when shifting until the woman on Jen's boat are attacked by the Legion. The women save the day and all is well until Jen learns the Legion is not only kidnapping women, they are now kidnapping small children. She, Jessica and Tshering set out on an adventure without their mate’s knowledge to rescue a warehouse full of youngsters only to have their plan backfire on them. They are captured by Legion forces. While Jessica and Tshering are held in the basement, Jen wakes in the arms of a man she first sees as Gabe... (woops) It’s not Gabe, but his identical twin brother Bagsu, the leader of Set's Legions. Jen works her magic and convinces Bagsu to return her and her friends to GI, meanwhile Tshering has been taken by Unab, an ancient Legion Prime, who is behind the children's kidnappings. He's seen her shifting abilities and has full intention of making her his queen and over-throwing Bagsu for leadership of the Legion.

In the end, the woman including Tshering are returned to GI. Gabe and his onetime best-friend and twin come close to reuniting but before they shake hands, Bagsu dematerializes into the unknown; a place where time is at a standstill and all time come together.  Too bad, Unab escapes during an all-out battle (which sets up books four and five) Tshering and Lance are swept into the past, Tuat, where they unite as one before returning to the present. 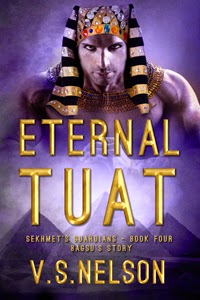 Book Four - Eternal Tuat: (Bagsu's story and the first historical.)
As you just read, Bagsu dematerializes into the Unknown, this is where this book takes place. He takes the reader back in time, back to the beginning when Brothers where united as they should be. Best of childhood friends he and Gabe sit on the steps of a temple waiting for Lance to be born. It follows their lives until the moment they arrive in ancient Egypt, a time when they become bitter enemies. I should mention, a glossary of terms and names is included in this book since the Guardians weren't always known as Gabe, Raphael, Lance, etc. It is Bagsu's story, his life and the events which took him on a totally different course through the ages than his brother. The book ends when Bagsu knows his time is in the past has ended. He returns to the present hell bent on destroying Unab which sets up the next book in the series. 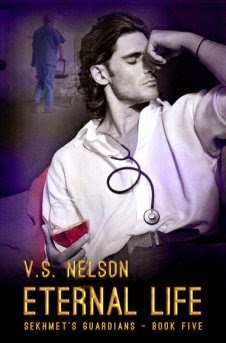 Book Five - Eternal Life - Coming soon, 2014.
Michael, the Guardian's physician is determined to cure little Samantha, a child saved by the Guardians, of the Aids virus. Her mother is found in a hospital lying in a coma. Michael, much to Gabriel's disapproval, moves the mother to the Guardian's estate, for personal reasons. Michael was born with an exceptional ability to see into the minds of others, but since meeting the child's mother, no matter what he does, the feelings, the emotions, and the insight he has always had has all but disappeared. Does this woman hold the key? He hopes so. Meanwhile, the Guardians and Bagsu separately search for Unab. The quest continues as does the saga of all players in the series.

With a love for history, Native American author V.S. Nelson, instructed elementary, high school and college in the U.S. and abroad before launching her second writing career.

V has been a story-teller all her life, always creating stories about people discovering the courage to make a difference. This drove her into writing her paranormal series centering on strong relationships and led her to coin the term: Ancient Legends, New Worlds.
She is well known for her “time management and sprint style writing,” producing well over five thousand words daily - consecutively. Ms. Nelson is available for speaking engagements, appearances and is more than willing to share her methodology with others in a variety of workshops.

A member of three RWA chapters she sits on several committees and judges writing contests across the states. She is currently the Vice President of Communications for the Desert Rose (Phoenix) RWA Chapter.
She enjoys hearing from readers, fans and people with similar interests. They are more than welcome to contact her through her website http://www.authorvsnelson.com

~ Giveaway ~
a Rafflecopter giveaway
Posted by Gia Guido at 7:30 AM