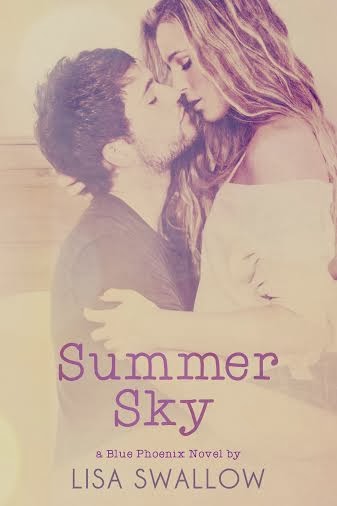 Sky changed her life for a man once, and she has no intention of doing it again - even if he is a six foot, tattooed rock god who makes a mean bacon sandwich.

Sky Davis is fed up of boyfriend Grant taking her for granted and when she comes home to find him wearing a girl, Sky suspects the relationship is over. She takes an unscheduled holiday and leaves the life (and guy) she hates behind.

Rock star Dylan Morgan is struggling with fame and infamy, sick of his life being controlled by other people. Dylan cuts his hair and walks away from his role as lead singer of Blue Phoenix, leaving chaos and speculation behind.

Outside the English seaside town of Broadbeach their cars and worlds collide.

Sky decides Dylan is an arrogant guy with too many tattoos, and Dylan is amused by the smart-mouthed girl with no idea who he is. Dylan and Sky soon discover they’ve travelled to Broadbeach for the same reason - to escape from reality back to a place with happy childhood memories.

Losing themselves in a world where they know nothing about each other, Sky and Dylan begin a summer romance that soon heats up their rainy English summer.

Fantasies can’t last forever and when reality crashes the party, Sky isn’t sure she wants to be more than his ‘summer Sky’ but Dylan doesn’t want to let her go.

Returning to the real world and public scrutiny isn’t their only problem. Blue Phoenix bass player, Jem Jones, has a reason for wanting Sky out of Dylan’s life, and is determined to come between them. Some things won’t stay hidden, even when they’re paid to ‘go away’.

Summer Sky is a quirky romance where occasionally more than the bacon sizzles. This is the first in the new ‘Blue Phoenix’ series of contemporary rock star romances. 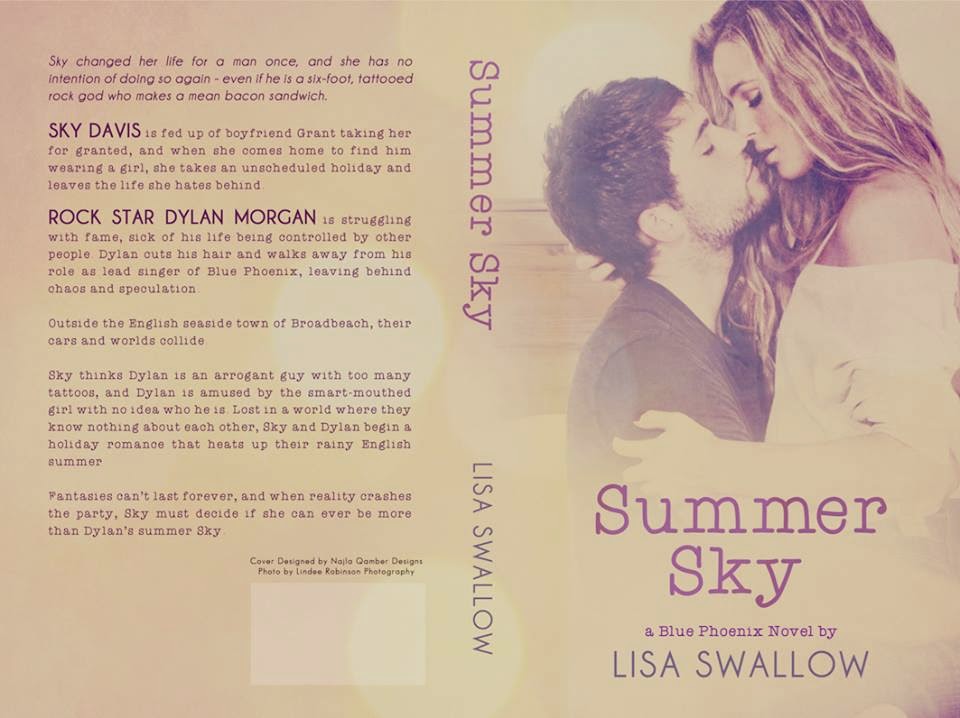 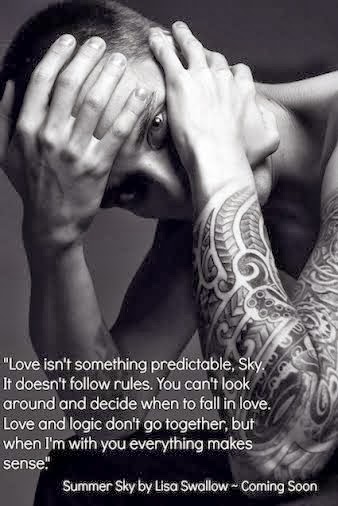 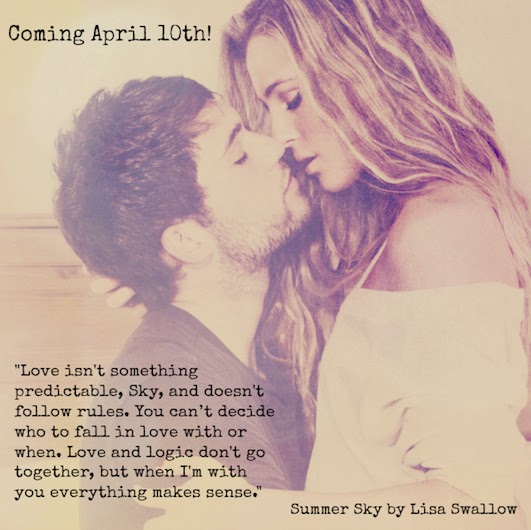 I have my back to the ocean and a wave crashes against my legs, destabilising me. I regain my footing and attempt to move before the retreating water sucks my feet into the sand. At that moment a larger wave wipes me completely, dragging my body underwater. I panic at the confusion of being pushed and pulled out of my control, seawater swirling hair into my face and the bubbles rushing into my ears. The shell remains tightly gripped in my hand.

As water draws away, I push my head free. Dylan stands on the edge of the shore, water lapping his ankles, laughing. I spit out sea water and stagger to my feet. The weight of the damp hoodie threatens to pull me down again as I push hair from my eyes.

"That was fucking funny! You should see your face!" He wades towards me, arm outstretched to help.

Attempting to keep my footing, I lunge at him and slap his hard chest with both palms. "It was not! Screw you!” Dylan catches my arms as I make contact, and pulls me towards him.

Scrutinizing my face briefly, Dylan takes my cheeks in his broad palms and crushes his lips against mine. I gasp again, but it's not the sea snatching my breath this time. A new wave sways us, and Dylan holds my face tightly, his own footing steady as his mouth claims mine. A small voice in my head asks what the hell I’m doing but I ignore it - Dylan overwhelms all common sense the moment I have any physical contact with him. Losing myself in his mint-flavoured kiss, in the slide of his cool tongue, I yield to the power he holds over me. Dylan curls his fingers into my wet hair and pulls me closer; I respond with a deep kiss, tracing fingers across his stubbled cheek.

Fierce or gentle, his kisses mould my soul to his as perfectly as his body shapes with mine, as if we’re in a place created by our coming together. Kissing Dylan last night pulled me into his orbit, and when I see stars again, I swear his kisses will always take me to the edge of his galaxy. If Dylan can remove me from reality with just this, god knows what anything else he's skilful at would do to me. The thought of us skin on skin, united through more than a kiss, lights a fire deep inside that would take more than the cold Cornish sea to extinguish.

Dylan loosens his grip on my hair and slides his hands across my damp back. He closes the final gap between us as our bodies meet, and I wish the rain-soaked clothes weren’t in the way. “I have never met anyone so…” He grasps for a word then gives up and rests his forehead on mine. “I feel as if I’ve waited my whole life to meet you and then suddenly you’re here.”

For a moment I consider whether he’s teasing me again, but I guess I’m very different to the people in his real life. "I can honestly say I've never met anyone like you, Dylan Morgan."

He wipes water from my cheek with cool, damp fingers. "No-one’s met Dylan Morgan apart from you. Not for a lot of years, anyway.”

I stare at the truth reflected in his pale blue eyes, unable to believe any of this is reality. His grip on my back loosens, and I step back. Rain drips down his face, soaking through his T-shirt and clinging to his body in a way that does nothing to help my mounting desire to get my hands on him.

A subject change is needed rapidly, before I begin drooling.

Review by Gia:
OMG!! I loved Summer Sky.  It's a drop everything and read now book.  The beginning is in Sky's POV, then half way through the book we get Dylan's POV added.
Sky and Dylan meet by accident, literally during a rear end accident.  Then the meet again when Dylan has rented a beach house that Sky thought her Grandmother said she could stay in.  It's really funny when the run into each other.  The banter between them is great.
Sky has no idea who Dylan is.  He tell her he is a rock star but not from what band or how popular the band is.  She resists the urge to google him to see who he is and he doesn't tell her.  They build their own world where no one else exists.
When the real world crashes down on them, it's not pretty for the relationship that they have built.  Can they have a relationship in the real world?  You'll just have to read it to find out.  You won't be disappointed.
I was warned there was a cliffhanger but wow was there a cliffhanger!  It's a mind blowing, jaw dropping cliffhanger.  There is a bombshell revealed at the end of the book that is shocking.  I can't wait to read more.
Summer Sky is an absolutely amazing story!
5 Amazeballs Stars! 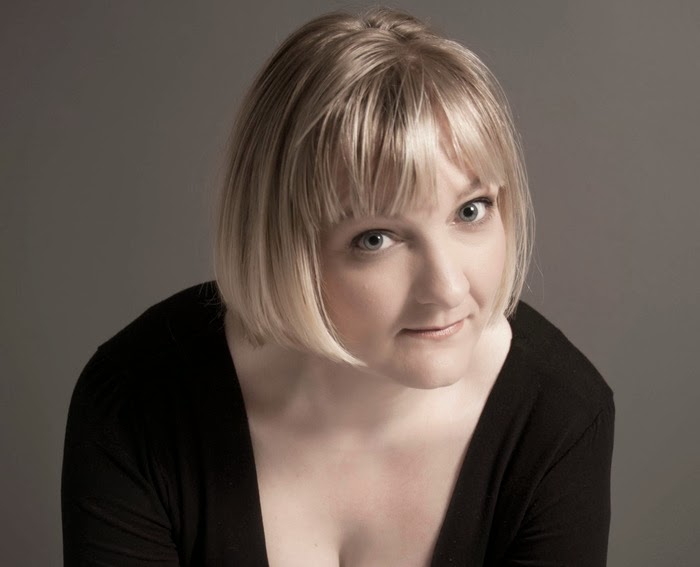 Lisa is an author of new adult romance and writes both paranormal and contemporary, often with a side of snark. In between running a business, looking after her family and writing, Lisa sometimes finds spare time to do other things. This often involves swapping her book worlds for gaming worlds. She even leaves the house occasionally. Lisa loves all things from the Whedonverse and preferred vampires before they sparkled.
Lisa has four books published: the ‘Butterfly Days’ series, and two in her urban fantasy series Soul Ties. She is currently working on a new contemporary romance series Blue Phoenix and the first book, Summer Sky is due for release in April. Lisa is originally from the UK but moved to Australia in 2001 and now lives in Perth in Western Australia with her husband, three children and dog. 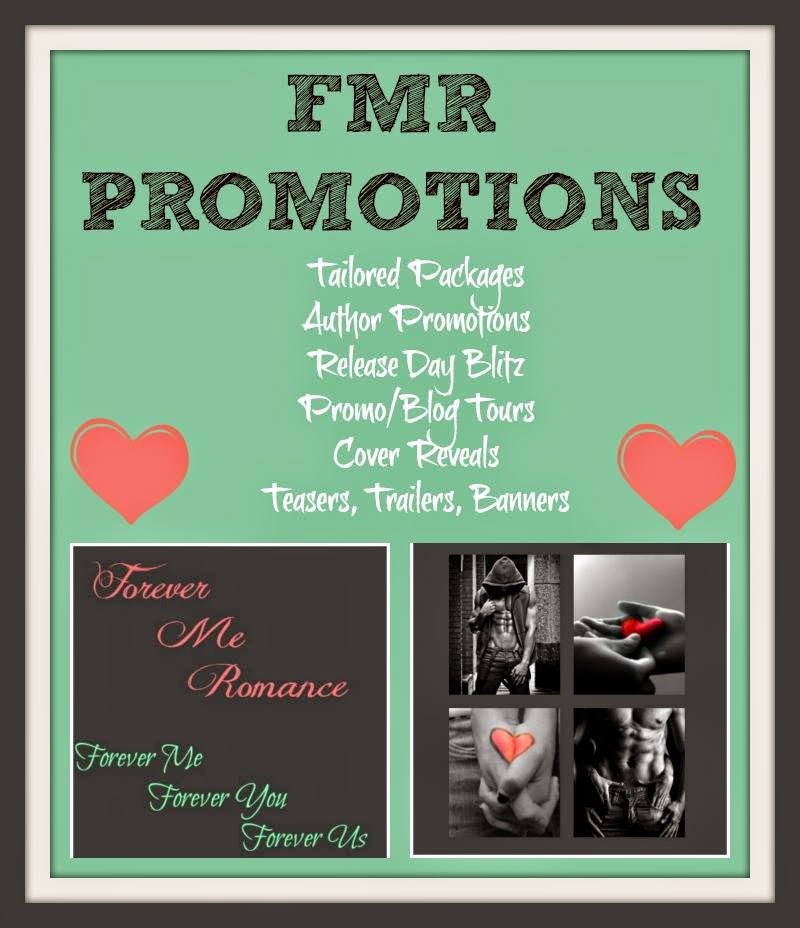