After Kylie narrowly escaped her abusive boyfriend, she moved to Florida to seek comfort in the arms of her first love, the sexy racecar driver Cameron. Their feelings for one another were quickly rekindled and their relationship fueled by desire, as things heated up and she fell right back in love with him.
However, it was not long before her past caught up with her, which leaves Kylie lying on a gurney in the back on an ambulance, fighting for her life. Cameron feels powerless as he watches the love of his life slipping away from him. Cameron blames himself and is overcome with guilt for failing to keep his promise to protect her.
Kylie’s love for Cameron gives her newfound strength to survive making her more determined than ever to defy the bastard that put her in this situation, but most of all she wants to start over with the man she loves. Will she survive and seek justice, finally being able to put her past behind her? Or will her past keep catching up to haunt her?
“I would give anything just to have Kylie open her eyes for a second so she knows we are here for her and I can tell her that I love her.” ~~Cameron
I can hear Cameron and Courtney’s voices over the machines as they talk, but as hard as I try I still cannot open my eyes. I feel like I am in the twilight zone, my limbs are still too heavy to move but my mind is aware of what people are saying. ~~Kylie 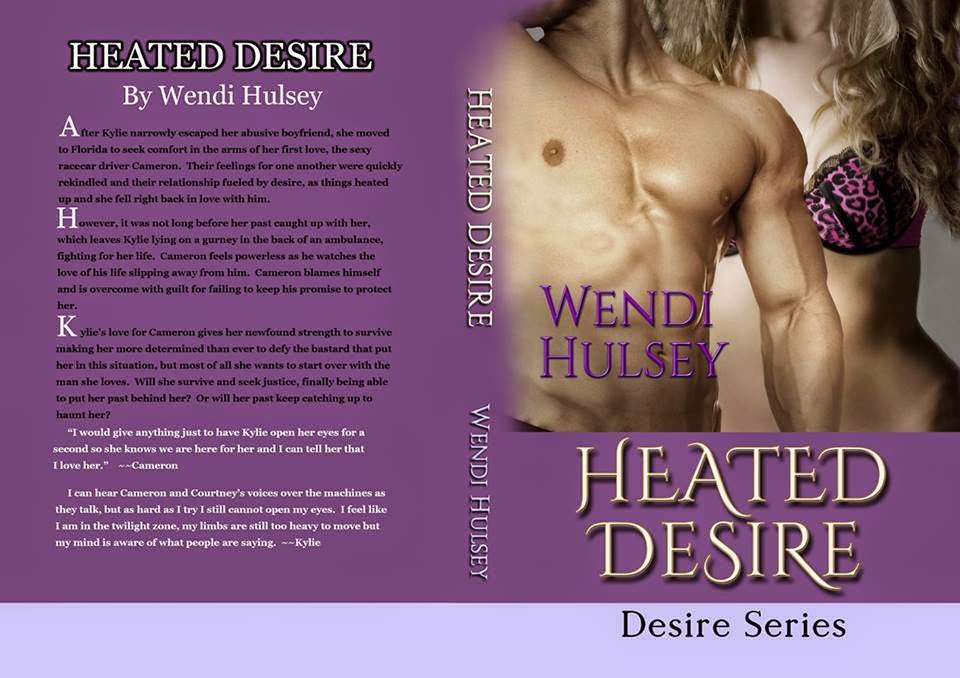 Review by Gia:
This is a great second book.  Heated Desire is book two in the Desire Series.  It is not a stand alone.  You must read book one Tainted Desire first.  Before reading Heated Desire, I reread the last couple chapters of Tainted Desire to reacquaint myself with the story and characters.  Heated Desire picks up right where Tainted Desire left off.  Tainted Desire left off with a cliffhanger of an accident and we didn't know who survived the accident.   In this story we find out Kylie is injured but she lived.   Cameron is by her side the whole time.  Even though Kylie and Cameron have made it through some bad times, there is still a lot of stuff thrown at them in the story.   Kylie still has some issues that she needs to deal with and Cameron becomes a little over protective.   Just when you think everything is going to be ok, Wendi Hulsey throws in a curveball of a cliffhanger.  I can't wait to read more.
5 Amazeballs Stars!!!
﻿

I put my phone in my purse just as we’re pulling into the parking garage. Thoughts of the hot sex we had in this very parking garage go through my head and I don’t know if I’m going to make it upstairs. I want this man now. I give Cameron what must be a lusty look because he warns me, “No, Kylie! Don’t even start here. I want you upstairs and in my bed where I have room to move and explore that body of yours.”
“What? I wasn’t thinking anything.”
“You are such a terrible liar. I saw you looking over this car and me, and I know what you were thinking.”
“Oh shut up! Come on let’s go, that long elevator ride is going to be unbearably long.”
Cameron smiles, “I can make it more fun.”
Unfortunately, I don’t think Cameron will be able to make the elevator ride fun because as soon as we get on so does half the building. It seems like everyone picked the same moment as us to get on. We’re smashed against the back of the elevator. I’m standing in front of him and he’s torturing me by running his fingers up the back of my thigh to the edge of my shorts. I try to still his hand, but he shoves my arm away. He has his other arm wrapped around my stomach and he looks like he’s just holding me close to him making room for everyone else. He runs his fingers up again to the back edge of my shorts and I feel his finger pull my shorts and underwear aside. Oh my god Cameron! Seriously with all these people! He whispers, “Spread those legs for me a little, babe.”
My body reacts to his commands before my brain can formulate what he intends to do in an elevator full of people. I can only pray these people get off soon. I feel his finger slide through my wetness as my body wants to react to his actions. I start to move a little with his finger but he tightens his grip on my stomach to stop me, “Don’t move, baby,” he whispers.
The elevator stops and a couple of people get off. During the shuffle of bodies, he inserts one finger, and my body bucks a bit. He slowly fingers me as my wetness increases, and I have to bite my bottom lip to muffle the moan that’s trying to escape. The elevator stops at the twentieth floor and three more people get off. One person is left, an elderly woman that looks at me and smiles. God, I hope she doesn’t know what Cameron is doing to me. Cameron increases the speed of his finger and I think I’m going to die trying to hold back an orgasm. Thankfully, the elevator stops again on the twenty-third floor and the little old woman exits with a little wave. As the doors of the elevator close, Cameron’s hand on my stomach dips into the front of my shorts and finds my clit while he fingers me roughly from behind. My head falls back on his shoulder and my palms flatten against the sides of the elevator as an orgasm rips through my body with such intensity that I scream. He continues to circle my clit bringing me slowly down from that earth-shattering climax. The elevator dings indicating that we have arrived on our floor. “See that ride didn’t take that long,” he says, with a smug smile.
“Are you fucking kidding? I was trying to hold back an orgasm for about ten floors. You’re such an ass!”
A loud laugh escapes him, “Baby, I didn’t see you trying to stop me, and that scream was fucking hot. My dick is so hard right now it hurts.”
I stomp past him out of the elevator towards our condo door. He quickly grabs me and spins me around to face him, pinning my arms above my head. He plants soft kisses on my neck and down my collarbone to the swell of my breasts. “Baby, don’t try to act like you’re mad when I know you enjoyed every minute of that ride.”

FACEBOOK / GOODREADS
My name is Wendi Hulsey. I was born and raised in Racine, Wisconsin, just south of Milwaukee. After several vacations to the sunshine state, my husband and I fell in love with the warm weather and decided to have a house built in Florida. I miss my family and friends up north; however, I will never regret not having to shovel snow again. I have been a registered nurse for about ten years. I currently work on a medical/surgical unit, preferring to work the night shift.
My husband and I have been married for sixteen years, and I appreciate his support during this endeavor. I have one son who is a hard working grown man now living on his own. He has blessed me with the most precious grandson and a wonderful future daughter in law. My daughter is a beautiful and smart teenager who excels at just about anything she tries. She enjoys playing soccer and we have spent numerous hours on various soccer fields. I am blessed to have my mother, a retired cook, living with me and she is a great help with cooking, cleaning, and chauffeuring the teenager. Other members of our family include; one dog, one cat, two turtles and several fish.
My love for reading began at the age of twelve on a stormy day. With nothing to do I was bugging my mother, she said, “Go read a book.” I have never stopped. As a teenager, I preferred horror books, mainly Stephen King. As I age, my reading tastes change and I currently read mysteries, romance, or erotica. It has always been my dream to write a book. Although writing is a hobby for me, I hope to produce a book to the best of my abilities and hope you have enjoyed what you read. Thank you for your support.