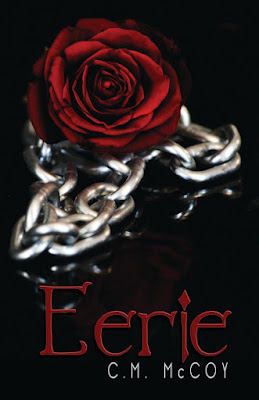 
Summary:
Being a ParaScience freshman is a nightmare come true Hailey’s dreams have always been, well...vivid. As in monsters from her nightmares follow her into her waking life vivid. When her big sister goes missing, eighteen-year-old Hailey finds the only thing keeping her safe from a murderous 3,000-year old beast is an equally terrifying creature who’s fallen “madly” in love with her. Competing to win her affection, the Dream Creature, Asher, lures her to the one place that offers safety—a ParaScience university in Alaska he calls home. There, she studies the science of the supernatural and must learn to live with a roommate from Hell, survive a tunneling earworm, extract a carnivorous splinter, evade the campus poltergeists, and hope the only creature who can save her from an evil immortal doesn’t decide to kill her himself. 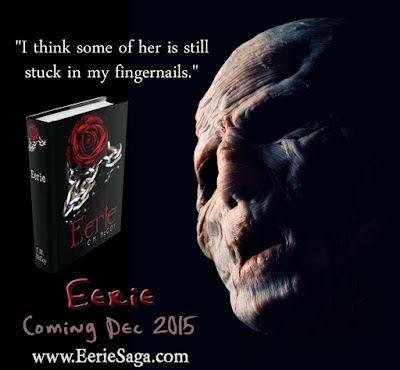 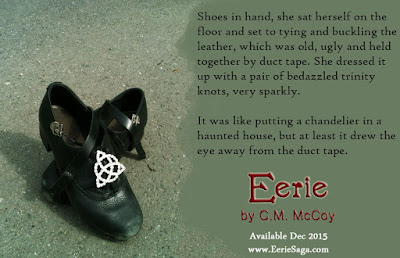 Early praise for EERIE:
“EERIE, full of voice and romance, is a thrilling and beautifully crafted story that had me up late, racing through the pages to get to the end.”
-          Author Brenda Drake
“5 stars! I felt there was a mash-up between Hogwarts, Xavier Institute for Exceptional Youngsters, and Beauty and the Beast, AND I LOVED IT! The creatures, the classes, the college, the Middle of Nowhere! How awesome!”  - Truth About Books by A. Fae on EERIE “I would definitely buy this series. I really loved these characters. It read very quickly, and the Alaska jokes really got me giggling.  - Confessions of a Book Whore, Jamie S. on EERIE “EERIE is Harry Potter meets Twilight meets the Bible with a little bit of the abusive/controlling 50 Shades male mixed in. This is a really fast-paced, exciting novel. There is plenty of drama, romance, mystical beings and mystery to keep you flipping the pages and promising yourself "just one more chapter" before bed. And then before you know it, ten o'clock turns into two in the morning...again.”  - Amanda's Own Little Corner Book Reviews 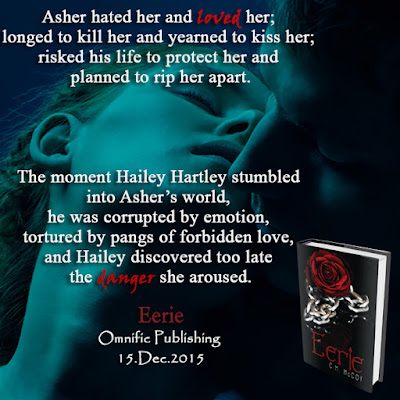 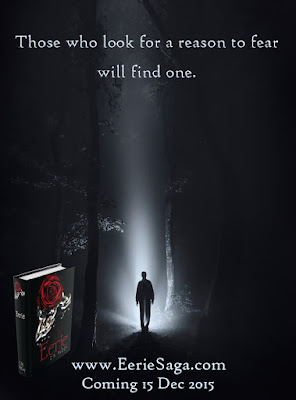 Excerpt:
A Guarded Girl
“Of all forms of caution, caution in love is perhaps the most fatal to true happiness.”
Bertrand Russell
Hailey stared at the empty can on her tray, silently willing the caffeine to kick in. The last thing she needed was to fall asleep, dream of monsters, and have an “episode” in front of her 200 closest non-friends.
No way she’d let that happen.
Now if only her droopy eyelids would cooperate, because the hard plastic chair under her butt sure wasn’t. The dang thing was teasing her and feeling mighty comfy, like a puffy armchair, and she was sinking fast. Thankfully, though, just as her head bobbed, the bell rang, jolting her into a wide-eyed, full-body spasm.
Great. Real smooth, she thought, rubbing her face with both hands as a few gigglers shuffled past.
She groaned, rising with all the enthusiasm of a mushroom, not at all looking forward to another two hours inside the social torture chamber, or as everyone else referred to it, South Side High School.
She was so intent on avoiding the students there for the rest of her senior year that she rarely looked up from her books anymore, and those last two hours dragged. When three o’clock finally rolled around, she bolted outside, took the first open seat on the bus, rested her head against the window, and let it bounce there. She was just about to make it through another day of school very happily unnoticed, when Tage Adams smacked her on the back of the head.
“Ah!” she yelled, startled from sleep.
The bus was waiting at their stop, like normal, and Tage was waiting for her in the aisle, politely—not normal.
Tucking a wayward strand behind her ear, she hurried off the bus.
Tage followed.
“What’s up with you today?” he said nonchalantly, adjusting his pace to walk next to her.
He’d never done that before.
“Nothing,” Hailey said, surprised Tage was talking to her. They’d been catching the bus at the same stop for four years, and he’d never so much as looked at her.
“You’re usually not like that, that’s all.”
“Like what?”
“Nodding off in class, falling asleep on the bus…you know, slacking off. It’s just, you know, you usually have your nose in a book.”
He watches me?
“Oh,” she said, unsure.
“Guess you were working late last night…St. Paddy’s Day…”
“Yeah.” Of course she was working late. Her family owned the most popular Irish pub in Pittsburgh. Hailey pressed her lips together. Small talk was not her thing. Especially not with him.
Her mind went blank.
Searching the pavement for a thought, she chewed her lip as too many seconds stretched the silence. Finally the pressure forced her good sense aside and she opened her mouth to say…anything.
“What’s—”
“Well, see ya ‘round, Dancing Queen.”
She snapped her mouth shut and waved as he peeled off and trotted down Bridge Street. She tried to form the word, “bye,” but all that came out was “buh—”. Standing dumbfounded, she stared after him. She hadn’t realized Tage knew she existed, let alone the fact that she waitressed. And danced.
Stunned, Hailey walked, then jogged, then stopped dead to puzzle over what had just happened. Then she jogged again until she finally reached the pub.
Nobody at that school “chatted” with Hailey. Not since the fourth grade, not since the day a particularly mean girl concocted a particularly ugly rumor—that Hailey had started the fire that killed her parents. The whispers and sideways glances lasted close to a year, and in trying to defend herself, Hailey only made things worse. By the time she figured out that nobody else believed in pyromaniac-nightmare-monsters, it was too late. She’d already earned the label, “weirdo,” which, unfortunately, stuck. 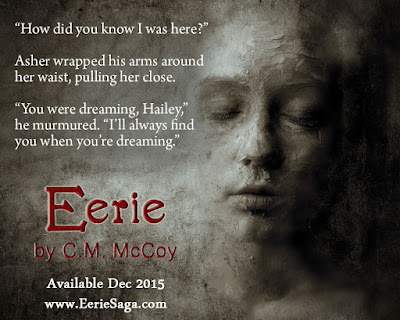 Teaser:
Nowhere to Hide
“Judge of your natural character by what you do in your dreams.”
- Ralph Waldo Emerson
Hailey plunked her head on the desk and groaned. Why, why…why couldn’t she just tell Asher that she wanted out, that she was afraid—afraid of the others, afraid of dying, and even afraid of…of him. After all, he was planning to kill her. Only temporarily, but still.
She couldn’t believe she was even considering it, but she had no choice. If Asher didn’t kill her, one of the others would.
Permanently.
And Asher protected her. He cared about her. He loved her, right? Asher—an emotionless creature. Hailey wasn’t sure if he was even capable of love.
Oh, this made absolutely no sense. Kill her to save her? Was that love?
Freshman year at her dream college was turning into nightmare, and as she rolled her forehead on the desk, the library’s impossibly large ceiling clock echoed a thump with her heart. She simply had to pull on her big girl pants and tell Asher she was done.
That’s all.
She squeezed her eyes shut as a swarm of butterflies took flight in her stomach.
Lately, she felt an awful lot like Jekyll and Hyde: logical, rational ParaScience student by day—emotional monstrosity at night. Come to think of it, this was more like The Phantom of the Opera, and she was the naïve student who didn’t realize the secret and strange angel she’d come to know was actually a homicidal maniac…
“I’m not a maniac.”
Hailey jumped up. She didn’t mean to say that out loud.
Asher slid behind her, putting his lips next to her ear. “But I suppose I am homicidal,” he whispered, his breath on her skin sending goose bumps down her arms and legs.
She leaned into him and sighed.
So much for steadfast resolve.
Wrapping his arms around her waist, he pulled her closer.
“How did you know I was here?” she whispered.
“You were dreaming, Hailey,” he murmured. “I’ll always find you when you’re dreaming.” 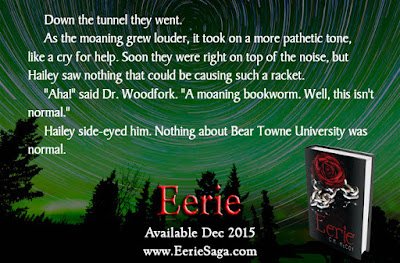 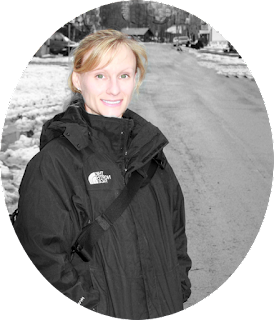 C.M. McCoy is an Irish dancer and former Air Force officer living in the Great White North. Though B.S.'d in Chemical Engineering and German, she’s far happier writing stories involving Alaska and a body bag (with an awkward kiss in the mix.) While working emergency dispatch for Alaska State Troopers, she learned to speak in 10-codes, which she still does...but only to annoy her family.
Social Media Links
Website: http://www.cmmccoy.com/
Facebook: https://www.facebook.com/eeriesaga
Twitter: https://twitter.com/eerie_o
★ Add to GoodReads: https://www.goodreads.com/book/show/27274308-eerie
RAFFLECOPTER $50 Gift Card Giveaway (3-31 Dec)
Link: http://www.rafflecopter.com/rafl/display/240fc93721/
a Rafflecopter giveaway
Posted by Gia Guido at 9:05 AM