Review for Mastered by Maya Banks 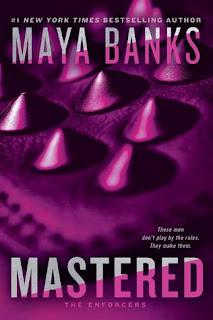 From the #1 New York Times bestselling author of the Breathless Trilogy comes the first novel in the Enforcers series—a bold new direction in erotic romance that explores the games men and women play, and the price they’re willing to pay for pleasure.What he wants, he takes with no remorse or guilt.She stood out in his club like a gem, unspoiled and untouched. A lamb among wolves, she clearly didn’t belong. Drawn to her innocence he watched as she was surrounded by men who saw what he did—but no one but him could touch her. He summoned her to his private quarters. He sensed her fear. He also recognized the desire in her eyes. And he knew she wouldn’t leave before he possessed her. She had no need to know his secrets. Not until he had her under his complete and utter control.What he wants, she isn’t sure she can give him.The moment he told her want he wanted, she couldn’t resist. Instinct told her to run, but her heart said stay and walk the fine line between pleasure and pain. Though she wasn’t sure she could ever completely surrender, the primal part of her wanted to try, even knowing this man could break her in ways she never imagined. Because once he possessed her, he owned her and it would be too late to turn back. She can only pray that he doesn’t destroy her in the end.Coming May 2016: The Enforcers Book II: Dominated


REVIEW BY TABITHA:
I want to start off by saying that Maya Banks is one of my absolute favorite authors. There have only been a couple of her books that I wasn't in love with. That being said, this is one of the books I absolutely LOVED!!!! I am a huge, huge fan of alpha men and all their quirks. Drake Donavon was no different. There were times I was like, yeah that is totally fantasy. No way would that ever happen in real life. And if I'm really honest that was one of the things I LOVED about it. I, like anyone else, like a book that I can relate to and want to be able to say "oh yes that is totally believable," however I really like books where I can say "absolutely no way is that happening in real life and that is why I love it." Drake Donavon is one of those heroes that you love to hate and vice versus. I wanted to kiss him all over one minute and strangle him the next. I wasn't sure how I originally felt about Evangeline at first, but she quickly grew on me (like a chapter or two and I really liked her) and I really, really loved her interactions with all Drake's guys. I literally laughed out loud many times. I do want to say that the ending is a hell of a cliffhanger and one I didn't expect. I originally thought that though this book was the first of the series that each book would be about a different guy and girl so I was doubly shocked when it ended the way it did and almost threw my kindle. And I do mean I REALLY ALMOST THREW IT!! I screamed at it for a long while to the point of my kids asking me what in the world was wrong with me. I. NEED. THE. NEXT. BOOK. ASAP!!!! This was all around a 5 AMAZEBALLS star read in my eyes. A truly must read!!! US AMAZON BUY LINK
Posted by Tabitha Stokes at 9:03 AM