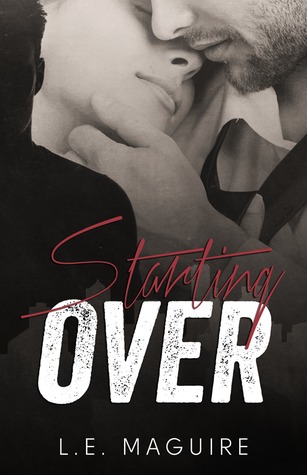 Starting Over (Hart of Seattle, #1)

Ella Martin was devastated by the events surrounding her divorce. Determined to start over, she relocates from New Jersey to Washington to be a photographer with her longtime friend, Renatta. Having been emotionally scarred by her ex-husband’s betrayal, Ella didn’t believe she would ever be able to trust another man again. Then she met Xavier Hart, a successful CEO of an investment firm. She soon discovers that she cannot resist the dangerously handsome Xavier. But her struggles with her intense jealousy and trust issues start to clash with his controlling tendencies. As their relationship develops, she discovers the reason for his controlling nature over her and his desperate need to keep her safe. When her ex-husband suddenly relocates to Washington, her past and present collide in a dangerous way. 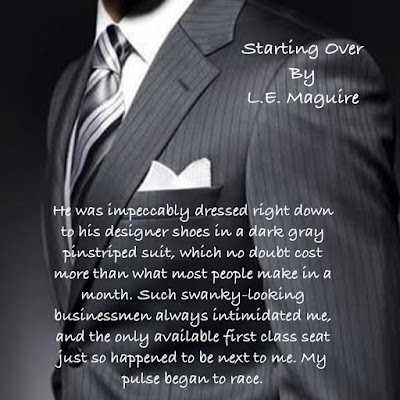 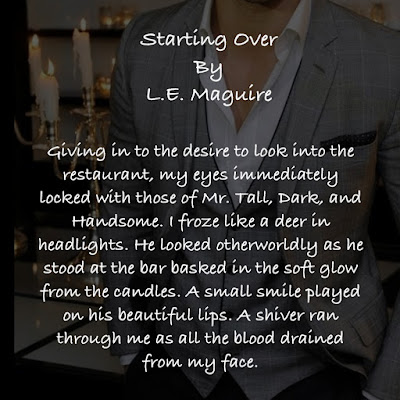 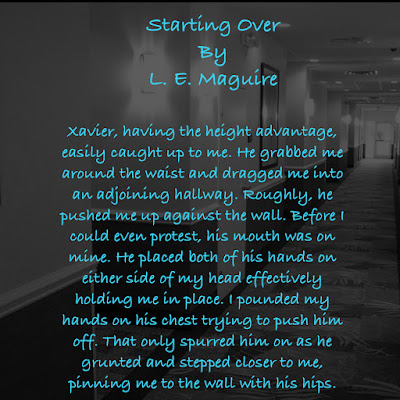 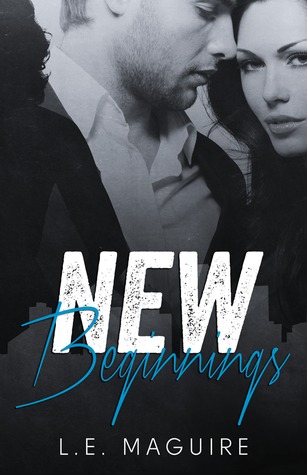 Ella Martin, having overcome a devastating divorce, quickly found herself caught-up in a whirlwind romance with Xavier Hart, a charismatic and successful CEO of an investment firm.
As their romance quickly blossoms towards a more serious commitment, Ella tries to come to terms with her fear of getting hurt. While Ella struggles to realize if her love for Xavier is greater than her fear of another husband betraying her, her ex-husband, Stephen, is still deviously lurking in the background.
When Stephen gets involved with someone else, Xavier is not convinced that he no longer poses a danger to Ella. Xavier’s struggle with his need to keep Ella safe only intensifies.
When strange events surrounding Ella start to take place, Xavier believes his suspicions of Stephen are warranted, and he will do whatever it takes to keep Ella safe. But is Stephen really the one who is conspiring against them or is there another who is working maliciously to destroy them? The love story of Ella and Xavier that began in Starting Over concludes in New Beginnings. 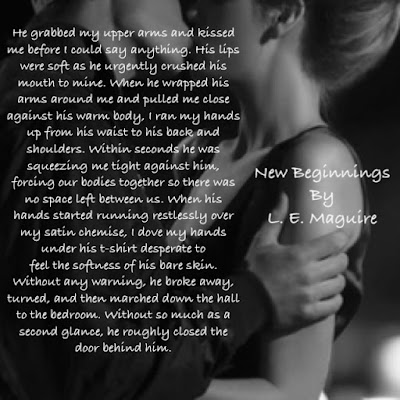 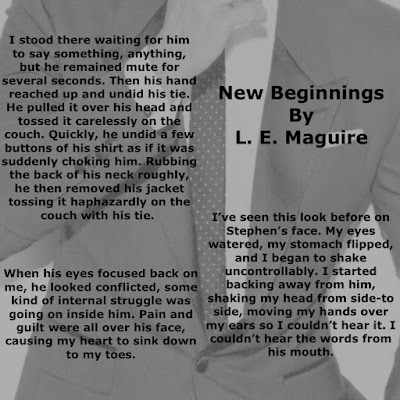 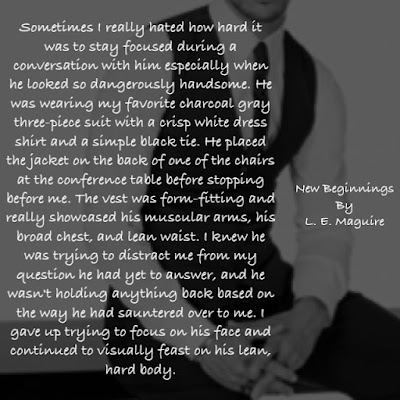 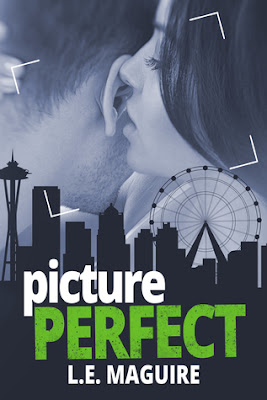 Ember Whitfield was well on her way to living the life she always envisioned for herself. She received her degree in photography from a prestigious New York university. Her best friend, Jake, was her roommate and photo assistant. And after fleeing the tough competition of New York City for Seattle, she had high hopes of being able to obtain her dream as a professional photographer. But most importantly, Ember was perfectly single. And after having dumped her not-so-perfect, philandering boyfriend, Ember planned on staying perfectly single. But as Ember soon discovers, things don't always go as planned.

Ember’s assistant secretly enters her in a local contest, winning her a gallery showing. She's hopeful this will get her and her work quickly noticed. While out celebrating her impending show, Ember gets hit on by the most annoying, arrogant man, who is also the most attractive man she’s even seen. He’s tall, built, and ruggedly handsome. He's perfect, but he's also not part of her plan.

After landing a photo shoot for a popular fashion magazine, in strolls the up and coming male model, Evan Ryan James. The perfectly annoying, arrogant, gorgeous man from the bar. Evan had been immediately captivated by Ember, but after getting her heart broken by her former philandering boyfriend, Ember vowed she would never get involved with another model again. But Evan isn’t going to take no for an answer. He believes he found the perfect woman in Ember, and he is determined to make her see it. Just as Ember starts to let Evan in, both of their careers take off. Soon, their tenuous relationship is quickly put to the test when they are both pulled in different directions by the high demands of their jobs. 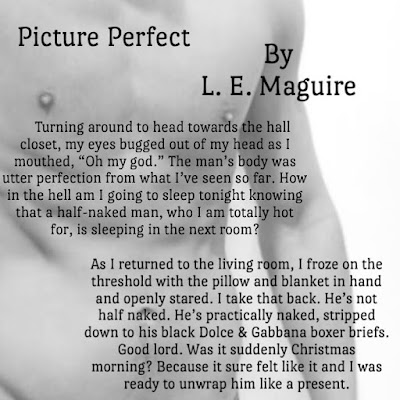 Excerpts
Excerpt One
(When Ember first meets Evan at the bar)
I tried to get Blondie’s attention so I could get more water, but she was studiously ignoring me.

“I think you broke her heart after she watched you grind all over your boyfriend on the dance floor," said a smooth, deep, male voice.

I rolled my eyes with irritation and turned in the direction of the voice that just spoke. Gearing up to verbally slap him with some sarcastic comment, I froze when my eyes made contact with a tan, chiseled chest peeking out from under a deep purple dress shirt, which had the first three buttons undone. There was a light smattering of dark hair over his sternum that lead up to the hollow of his throat and the smooth, tan skin of his thick neck. Dark stubble ran along a strong jaw. He had a perfect mouth with full lips, a prominent nose, and high cheekbones. I sucked in a breath when my eyes met the greenest eyes I'd ever seen. They were luminescent with light green flecks shining like brilliant malachite stones. These eyes were so hypnotic and surrounded by long, dark lashes. Thick, dark brows, a proud forehead, and thick, wavy dark hair finished off his perfect features. He was chiseled to perfection. I couldn't help but stare open mouthed at him.

Suddenly, his lush lips curved into a smile revealing perfect, white teeth, and that's when I saw them. Two of the deepest dimples I've ever seen carved into his cheeks. Oh. My. God. Dimples.

"See something you like?" he asked sounding cocky, running a hand down his chest.

And just like that he killed all the warm and fuzzy feelings that were bubbling up within me. It was as if the growing fire deep within my core just got doused by a bucket of ice water.

“Seriously? He's not my boyfriend,” I snapped in irritation.

He raised his brows. "You could've fooled me."

"Not that it's any of your business, but he's like a brother to me."

He cocked a brow at me. “Do you always dance like that with your brother, because I'd be more than willing to take you on as a sister."
He smiled and there were those damn dimples again, winking at me, taunting me. His green eyes twinkled with humor, and it felt like a thousand butterflies just took flight in my stomach.

Excerpt Two
Stopping before the door to room 462, I took a deep breath, reached up, and knocked twice as instructed. It was a moment before Evan answered, but when he finally did, holy hell, my jaw hit the floor.
Wearing nothing but a white towel wrapped around his waist, his dark hair slicked back from a shower, he gave me a half smile and invited me in.
Not two steps into the room, he grabbed my arm, spun me around, and shoved me face first into the door. My palms stung as I quickly slammed them against the door trying to keep my face from slamming into it.
Evan’s warm body quickly pressed up against mine before I could move, pushing me harder into the door. His hands came up and rested next to mine, caging me in. Fresh from a shower, he smelled of his usual spicy cologne, which was intoxicating.
“I’ve been thinking of nothing but being buried deep inside of you ever since you stopped me earlier.” Closing my eyes, remembering our encounter, my breathing spiked. “All afternoon, Em, I’ve had to hold myself back. I felt like an alcoholic tied up with an open bottle of booze just out of my reach. I could see you, smell you, but I couldn’t reach out and touch you or taste you,” he growled in my ear. 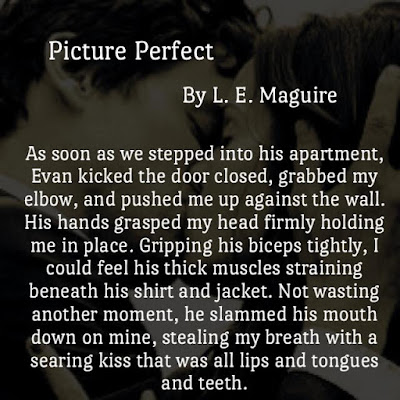 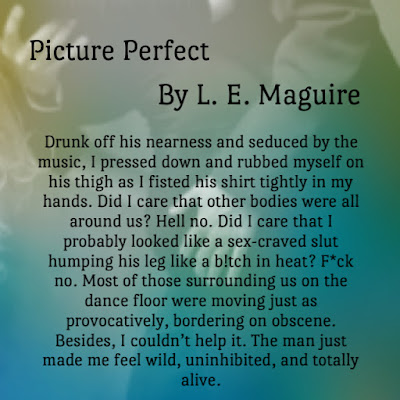 L. E. Maguire is an independent author who is a born and bred Jersey Girl currently living below the Mason-Dixon line.

She is an avid reader with a passion for romance novels. When she's not reading, you can usually find her writing.

She also has a special love for photography, football (sharing an equal passion for both the NY Giants and the Seattle Seahawks), and all things vampire.