Finding Us (A Nucci Securities Novel)
by Debra Presley


Pop star Abby Murphy is living every girl’s dream. She has fame, fortune, and a handsome boyfriend, a guitar player named Sean. That changes the night she finds him in the arms of another woman. Hurt and betrayed, Abby ends their relationship. But Sean won’t accept the breakup, and she soon learns that he’s had a hidden agenda all along. Overnight, Sean transforms from loving boyfriend to dangerous adversary, and Abby no longer knows who she can trust among her friends and family.
Abby turns to her bodyguard, Danny Nucci, a man who will do everything in his power to keep her safe. But when Abby realizes her feelings for Danny run much deeper than she thought, she refuses to give in to her attraction in order to preserve her new found independence as well as protect Danny from Sean’s machinations.
When Abby finally finds the strength to reclaim her life and acknowledge her growing love for Danny, will she be able to let him in? And will Danny be able to overcome his own demons to be the man she needs him to be? Or will she be forced to let him go forever? 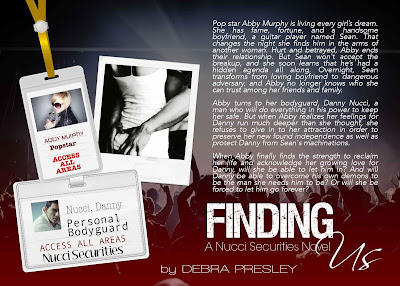 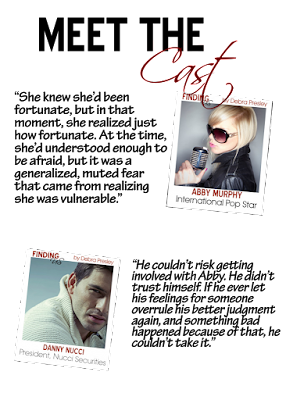 Debra is a native New Yorker who made her escape to the suburbs. She often returns to her hometown to visit her favorite deli for a bagel with butter, because there’s no better bagel than a New York bagel. When not in search of bagels, Debra spends her time running Book Enthusiast Promotions, an online promotions company that helps indie authors spread the word about their books. She’s also the owner of The Book Enthusiast blog.
She started writing lyrics in her wall-to-wall NKOTB bedroom at the tender age of thirteen while dreaming of the day she’d become Mrs. Jordan Knight. That dream never came to fruition, but she has continued to write. Now she’s working on her first novel.


Finding Us is a mixture of romantic suspense and contemporary romance.

The book is about pop star Abby Murphy and her bodyguard Danny Nucci. From the outside Abby appears to have it all but behind the scenes she has a controlling mother/manager and a boyfriend that’s a cheat. One night she walks in on Sean, her boyfriend with a groupie and decides enough is enough and leaves him. Sean doesn’t take the break up well and starts some trouble.

Abby soon finds out who she can and cannot trust. She turns to her bodyguard Danny to keep her safe. But when Abby realizes her feeling for Danny run much deeper than she thought, she refuses to give in to her attraction in order to preserve her new found independence and also because she wants to protect Danny from Sean.

Soon though she can’t fight her feelings but Danny has his own demons from his time in the Army and he isn’t sure that taking that next step is the right thing to do.


I still can’t believe I finished the book. It took me a long time to write but I’m glad I took my time. When I finally hit publish I was quite emotional over it all.


My story is similar to a lot of authors. I read Twilight and loved it and then I read an article about the author and she spoke about how Edward and Bella came to her in a dream and I thought that was just so cool. I tried then to write but I had no idea what I was doing. Then FSOG came out and I started my blog and learned a lot and an author friend encouraged me one day to just do it and so I did.


That’s so hard to answer but I’m obsessed with JM Darhower’s books so I’d say either Corrado Moretti from the Forever Series and the book Made or Ignazio Vatale from Monster In His Eyes and Torture to Her Soul.

I work with a loose outline but that always seems to change. I like to have my ideas down in one place so I don’t forget.


I tend to write in my bedroom. I have a small desk set up so I write.


Most of the time I do but sometimes I just need quiet.


I run Book Enthusiast Promotions and that takes up a lot of time but when I have a rare day off I spend it with family and friends.


What writing projects are you currently working on?

I’m actually writing a short story with Abby and Danny in it. After I’m done with that I’ll start working on the next book in the Nucci Securities series, Saving Us. It’s the story of Sophie and Connor. They are two minor characters in Finding Us.