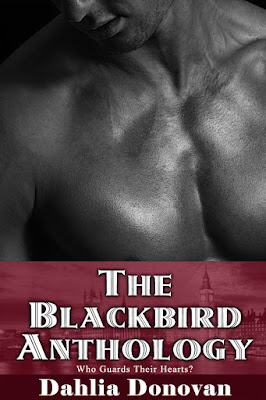 When a group of lonely shifters came together during their service with the Royal marines, they never imagined the strong pack that would develop between them. Channeling their special operative training, they built a security firm with two alpha wolves at the head of a motley crew of shifters not known for playing well-together.
They’ve lived their lives as outcasts from their own individual species of shifters choosing to form a family with each other instead. Until Now. Follow the Blackbird pack as they fall victim to love one by one.
Can they guard their own hearts?

The Blackbird Anthology is the complete Blackbird series story containing: Ivy, Natasha, Masquerade, Twelve Days and Under Fire.  It also contains the Lorcan which will also be available as a free read for subscribers to Dahlia's newsletter. 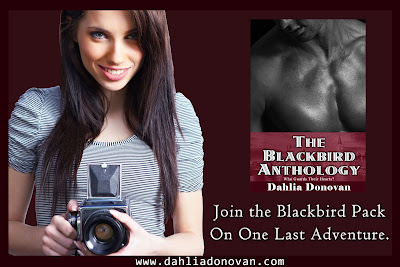 ‘No!’
Shooting off the bed with a shuddering gasp, Ronan ran a shaking hand across his sweaty brow.  He glanced to his left to find Lorcan still soundly sleeping—thankfully. Ruddy nightmares. After all these years, it seemed the horrors of the last incident in Afghanistan might never completely fade away.
He reached down to rub the scarred tissue at the end of what remained of his leg.  Lorcan grumbled incoherently at the jostling and rolled over on his side.  The hare shifter would be angry in the morning if he discovered his mate had suffered in the night without waking him.
Too bleeding bad.
Nothing angered Ronan more than being treated like he was broken.  The damn blast had done nothing more than temporarily steal his ability to function.  With his state-of-the-art prosthetic, he’d believed himself to be as close to what he’d been in the past as ever.
Everyone else in his life didn’t seem as convinced, Lorcan being the rare exception.
“Leg bothering you?” Lorcan leaned up on his elbow with a mixture of weariness and concern mingling in his eyes. “Another nightmare?”
They both suffered them after the living hell Afghanistan had been.  The dreams had lessened over the years. Ronan wondered if they’d ever completely rid themselves of the lingering memories.
Lorcan’s warm hand moved over to cover Ronan’s.  Twisting around on the bed, Ronan leaned over his shifter until their lips met.  He’d always found his mate’s lips to be remarkably full and soft, given nothing else about the man could even be considered soft.
Lorcan traced Ronan’s bottom lip with his tongue and reached up to catch him by the back of the neck to hold him close. “I’m on top this time.”
“No, you’re not.” Ronan’s brogue tended to deepen and roll seductively when he was half-asleep and in the mood. He blocked Lorcan’s attempt to roll them over and caught the shifter’s arms in strong, calloused hands. “Easy there, fuzzy britches, you’re not going anywhere, got that straight?” 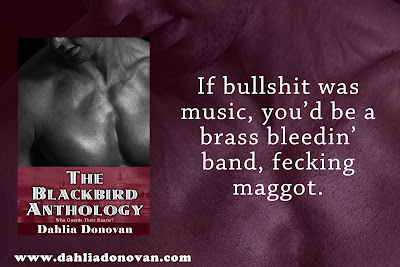 Dahlia Donovan started out working in the insurance world. After ten years, she morphed her love of investigating accidents and studying people into writing about them. She's a bit of a hermit and despises being in front of a camera. Her life wouldn't be complete without her husband and her massive collection of books and video games.

1. Can you tell us a little about your books?
The Blackbird series started out of a crazy dream. It’s a series that focuses on a group of former British Royal Marines who have started their own security firm. Each member of the firm is a shifter, though they all vary in type. The pack has two wolves, a cougar, a panther, two foxes and a rabbit—plus a few others who pop up now and then.
The first story in the series, Ivy, introduces the two alpha wolves who run the pack and their non-shifter mate, Ivy. The series is paranormal romance with just a hint of danger and suspense thrown in with a ton of my off-beat humor.
2. When did you know you wanted to write a book?
I wrote my first story when I was around ten—about a bear. I’ve always wanted to write, I just didn’t have the confidence in myself until I reached my thirties.

3. Which book has been your favorite to write?
So far? Alicia.
4. Do you work with an outline, or just write?
I have a loose outline, but mostly I just write.
5. Do you have a favorite spot to write?
Not really, I do prefer to have my favourite pen and a notebook to handwrite chapters out before I type them up.

6. Do you listen to music while you write?
Definitely. Each story I’ve written has it’s own playlist.
7. If  you could spend 24 hours as a fictional character, who would you chose?
Steven Samuels from my Blackbird series. I have a thing for silver foxes.
8. What's your favorite video game?
Oh that’s a hard question. A tie between Mass Effect (the entire series) and Dragon Age: II. Lately, I’ve been obsessively playing Destiny.

9. What writing projects are you currently working on?
I am currently working on a new series, The Fallen Knights, which focuses completely on a character from the Blackbird series, Elaine Gibbs. Her first novel, Misguided Confession, should come out next year at some point. I’ve just started to write it now.