Review of RUDE by Michelle Hughes 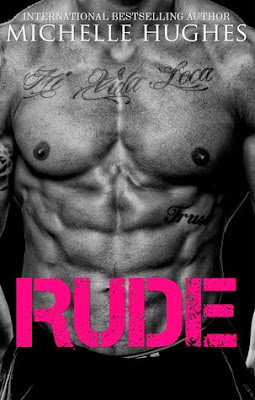 by Michelle Hughes
Sexy Twin Brothers. One owns her heart, the other make her burn. Would it be rude to keep them both?

Liam walked into my world and turned it upside down with his lickable abs, bedroom eyes, and alpha male persona. He was sin personified and I wanted him to damn my soul. Everything about him drew me in, daring me to step outside my comfort zone and forget all the rules I'd made to keep my heart safe. He was rude, vulgar, and promised everything a good girl dreams about doing with a bad boy.

As if his temptation wasn't enough, his twin brother was thrown into the mix. Luke was Liam's polar opposite in every way, except for his panty-melting looks. Charming, respectful, and a man you wouldn't mind taking home to meet the parents. There couldn't be a more perfect man. Put the two of them together and it was a combination no woman couldn't resist.

I've never considered myself a prude, even though I was holding out for marriage. How could I walk away from a night that fantasies were made of? Liam told me that great sex was never boring. It was dirty, passionate and always a little rude. All I had to do was say yes. Two sexy twin brothers promising one hot night of unadulterated sex.
Would it be Rude to turn it down? 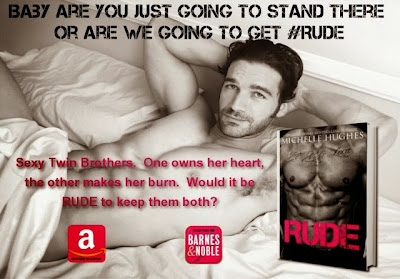 I loved Rude. It's a short quick and it's definitely a hot and steamy read.
Sara is a straight and arrow girl. She's still a virgin. She lets loose one night and get a drunk and meets Liam. Liam is super sexy. Sara doesn't remember much about that night but the next day she runs into Liam and his twin brother Luke. Liam remembers her. Luke and Liam are both super hot and they like to share everything including woman. They are both attracted to Sara and they want to share her. She is torn whether or not she wants the same. One night with them doesn't end as each thought it would. Feelings get involved and things get tricky.
It's a great story. We get the POV of both Liam and Sara which makes this such a great read.
5 Amazeballs Stars!!!


About the Author:
Michelle Hughes grew up as a military brat and now calls Verbena, Alabama home. Her love of romance began early in life when she would sneak her granny's bodice rippers into the bathroom for great plots to play out with her Barbie's. She's the mother of five great kids and married to the greatest fisherman on earth with a real job. Prior to a career in writing, Michelle was a singer/songwriter and hosted a televised talent showcase long before American Idol became popular.

Her favorite place in the world is New Orleans and she hopes to own a vampire nightclub there when her children are grown. She's written sixteen contemporary romances and enjoys penning young innocent women meeting strong alpha males that rock their world. Steamy, sensual, and happily ever after, that's what Hughes lives for in her world of romance.

Southern Hospitality is very important to Michelle, even in the world of literature. She's always willing to help new authors.