Release Blitz for BEHIND YOUR BACK by Chelsea M. Cameron

Today we are celebrating the release of BACK YOUR BACK by Chelsea M. Cameron. This is the first book in the Back to Back series. The next book, BEHIND YOUR BACK, will be released on June 9th. Be sure to check out the contest below -- it includes 20 fabulous prize packs!

BEHIND YOUR BACK Summary:

To get to him, I need to use her. I’ll play her like a violin and have her falling in love with me before she even knows what’s happening. It will be easy. I’ve done it before and I’ll do it again. She’s just a girl. A tool to get what I want. When I’m done with her I won’t think twice about walking away. At least, that was what I thought. Until I met her.

Add BEHIND YOUR BACK to Goodreads 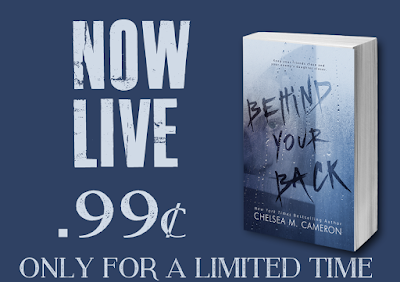 Wow Behind Your Back was a crazy great read.
Quinn and his team friends (Cash, Baz, Row, Hardy, and Track) are all into business together.  They don't run a legal business.   They are all close tight friends.  They funnel money out of rich business men's accounts and put it in there own.   The man they target are not of good moral character.  There newest mark is Mr. Beaumount.   Mr. Beaumount owns a discount clothing company.  He has dome some questionable thing to make money wit his company.
Mr. Beaumount has a daughter named Saige.  Quinn sets his sites on Siage.  He's not suppose to get emotional involved with her but he might not be able to help it.  Quin is a complex guy.   He's hard to figure out and I'm still not sure he know who he real is.  What he does for a living is not very nice but he's still a very likable character.
Saige is a great character too.  She's a little bit of a mystery.  She does some things that seem a little odd.  Her and Quinn seem good together.
The team current job is risky and someone may be on to them.  There is some suspense and mystery as well as romance in this book.
This is a great read.  It sucked in right in and I read it on one sitting.  The ending is absolutely crazy.  I never saw that ending coming.  I can't wait to read the next one, Back to Back.
5 Amazeballs Stars!!

Chelsea M. Cameron is a YA/NA New York Times/USA Today Best Selling author from Maine. Lover of things random and ridiculous, Jane Austen/Charlotte and Emily Bronte Fangirl, red velvet cake enthusiast, obsessive tea drinker, vegetarian, former cheerleader and world's worst video gamer. When not writing, she enjoys watching infomercials, singing in the car and tweeting (this one time, she was tweeted by Neil Gaiman). She has a degree in journalism from the University of Maine, Orono that she promptly abandoned to write about the people in her own head. More often than not, these people turn out to be just as weird as she is.