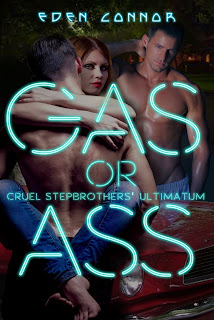 Not every relationship is about love.

The odometer on my sex life was stuck at zero the day my mother dragged home a husband I’d never met. Dale brought his two grown sons to help us pack and move into their house. Both were hard-bodied and handsome, but Caine didn’t speak to me. Colt, on the other hand, said crude stuff like, “Wanna ride with me? Then I’m gonna need gas or ass,” but I couldn’t take my eyes off his rippling muscles and challenging blue eyes.

Some are about speed, sex, and defiance.

When Colt offered me a ride to school, I thought the ‘gas or ass’ thing was a joke, but he wasn’t kidding. Though he barely touched me, he shattered the innocence I couldn’t wait to shed, and even then, I sensed I’d never be the same. He and Caine soon upped the stakes, putting me behind the wheel of cars that could reach insane speeds. They kept challenging me to find my inner wild child, pairing illegal drag races with high-octane sex games, like 'winner gets head'.

And some are about trying to break you.

It wasn’t long before I was hooked, but I always planned to walk away. Then everything spun out of control and walking wasn’t an option. I had to run. **Disclaimer: This is a tale of a young girl’s crush that turns to hatred and back to love. Gas and Ass is the crush-to-hate part of the story. There’s no HEA inside these pages, so if that’s a must, this isn’t the story for you. If you can delay gratification, however, the hatred-to-love part is the basis of the sequel, Turn and Burn. 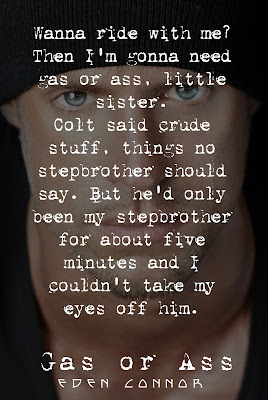 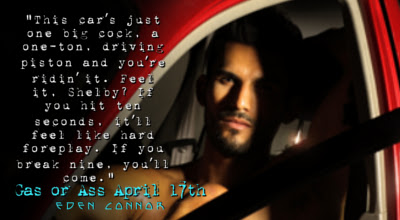 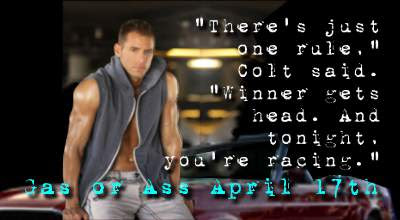 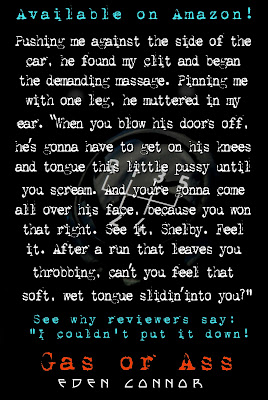 Eden Connor graduated from Converse College with a degree in Psychology so long ago, her sheepskin is chiseled in stone. She’s been a graphic artist, a bridal photographer, and an antique restorer. Since the death of her true love, she raised two children to adulthood before turning to writing. She writes contemporary erotic romance and has a definite affection for a blue collar man. Most of her stories are set where she lives, in South Carolina, so expect the handsome stranger to come equipped with a slow drawl. Addicted to hazelnut creamer, baseball and cranberry glass, she likes the music of Motown. When not writing about adults behaving badly, she takes a stab at the occasional needlepoint canvas.

I write contemporary erotic romances. I tend to shy away from billionaires, preferring to write the blue-collar hero. And, I love writing stories that make a reader feel she could step out her front door and walk right into my heroes, so my heroines turn up at the same places you might: their back deck, the county fair, just about anywhere in a small town.
If you mean one character I come back to again and again…. No. I swear, as I’ve grown older, I’ve developed Attention Deficit Disorder. Three books with one set of characters seems to be my limit before I start climbing the walls with boredom. They tell me it’s illegal to kill off a romance hero and heroine, so I just walk away and go meet some new folks I don’t know every little thing about yet.
And, since I’m a southern gal, my heroes all have a sexy drawl and my heroines have a wide independent streak they can hide behind fluttering lashes.
They’re all my favorites as I write them. My first, Soft Sounds of Pleasure. (Check it out, it’s free on all platforms) featured a heroine who’d just been widowed. My husband died when I was thirty-eight, so I feel closest to Lila Walker, the older woman tempted to love again by a much younger man.
I love the entire series, Those Devilish De Marco Men, because the family lives on an 800-acre, derelict peach farm in Upstate South Carolina.
See? Not a billionaire in sight.
Oh, I write outlines. I make index cards that list the major scenes and the twists the keep a reader pulled in. But, every time, my muse reads over my shoulder and says, “Is that all you got? Here, hold my beer and watch this.” Then, she throws some stuff down that basically negates the rest. But those scene cards look damn professional on my bulletin board.
I started out writing on my bed, with a little lap desk and my laptop. When my feet went numb from sitting Indian-style, I progressed to a desk and chair in my bedroom, but that isn’t working out so well since my granddaughter’s birth, so I just rented an office! And then, my daughter asked me to stay at her place until the end of the month because she had to go out of town. (sigh)
But, June’s a ‘comin’. Ass in chair, hands on keyboard…go! That’s my plan for summer. A whole lot of stories my fans have been waiting on will be released later this year, or y’all can send irises to my funeral, because those are my faves.
I wish. If I do, I end up typing the words I’m singing. I listen to certain songs to get into the mood to write some scenes, but my favorite sound, after raising two kids to adulthood, and living with my daughter and her child for the last eighteen months? Oh, yeah, it’s silence.
I’m pretty sure I have a malady I like to call typing dyslexia. That’s when my brain spells words right, but my fingers go off and do their own thing. Added to the fact that I cannot touch type to save my ass, I can reel off three paragraphs, then look up to see some stuff on the page that’s so garbled, even spell check says, “I got nothin’, bitch.”


My mother died in 2007. That ended a run of deaths that began with my grandmother, included my husband, my grandfather, and just about every person I’d ever loved. After Mom’s funeral, I shut my bedroom door, opened a romance novel, and stayed buried in one for the next three years. At the end of that time, I opened a Word document and started writing.
Every loved one I’ve ever lost lives on just a little bit longer in my characters.


I’m wrapping up the sequel to my most recent release, Gas or Ass. It’s called Turn & Burn. The series is a HUGE departure from my norm, but it has been a ton of fun to write. It’s a stepbrother romance that challenges every ‘rule’ of romance writing. It’s about fast cars, hot stepbrothers, thorny mother/daughter relationships, and sex that’s so twisted, it’s guaranteed to give your moral compass fits. Because...hey, why not? It’s fiction, yo. It makes me laugh to see some people get their panties in a bunch over stuff that imaginary characters do. My theory is, if it makes you forget your troubles, read it and to hell with feeling shame. Some folks just need to pull that stick out of their… yeah, anyway. (blush)
I’d sorta thought this series would be two books and done, but these rowdy characters want a third. It’s called Pedal to the Metal and will take the Hannah crew to the end of the road and their hard-won HEA.
Before I start PTTM, however, I swear to God, I’m gonna finish Love Gov, a story about the first man to run for the governor of South Carolina who’s been legally married to both a man and a woman, and the new love he’s determined to claim—the woman from his past who just got engaged to his opponent. (grin)