Blog Tour: Down for the Count Series by Christa Cervone

Review Blog Tour: Down for the Count Series by Christa Cervone On the Ropes (Book 1) Going the Distance (Book 2)

ON THE ROPES:
A murderer’s child…A foster child…A troubled teen…Gabriel ‘The Saint’ Vega has never had an easy life. Being shuffled from one foster home to another after his father murdered his mother, he found himself in and out of trouble with the law. Never giving a damn about himself, let alone anyone else, his life was spiraling out of control; fast. Until one man and one sport changed everything. Frankie Carbone taught Saint how to handle his anger and rejection; by fighting it out in the ring. On his way to stardom, Saint finds himself pushed into the spotlight and into the arms of more women than he can ever imagine; he’s completely content with one night stands and random sex. Then Salem Harris comes walking into his life and changes his game plan. Saint finds himself wanting Salem in all the ways that scare him. She is off limits; taken. But that doesn’t stop Saint from going after what he wants, and he wants her. Frankie showed Saint a new way of life with Boxing, but will Salem give him the one thing he’s never known – love? Will Saint find himself fighting for the one thing he thinks he doesn’t deserve or will Salem end up breaking his heart? Gabriel ‘The Saint’ Vega has had to fight for every good thing he’s gotten in his life.

REVIEW:
On The Ropes is a good read.  It's starts with a glimpse of the past.   We get a little feel for what childhood must have been for Gabriel Vega.  In the present time Gabriel is a boxer that goes by Gabriel ‘The Saint’ Vega.  He's a good boxer.  Frankie is his trainer but he is more like a father figure.  Gabriel is a hot and sexy boxer who like woman and partying.
Blaine is a rich guy who is opening a gym and wants to sponsor Gabriel.   Blaine brings his girlfriend Salem when he meets with Gabriel.   Gabriel  and Salem have chemistry.   There is a lot of sexually tension between the two.   When reading I was hoping that they would get together.  Blaine is not a nice guy and he cheats on Salem a lot so I didn't feel bad hoping that Salem would break up with him.
We also get to met Jase, Gabriel brother.  Gabriel does everything he can to help his brother.  Gabriel is a tough guy but he has a big heart.
The ending left me hanging and wanting to read the next one right away.
5 Amazeballs Stars!! 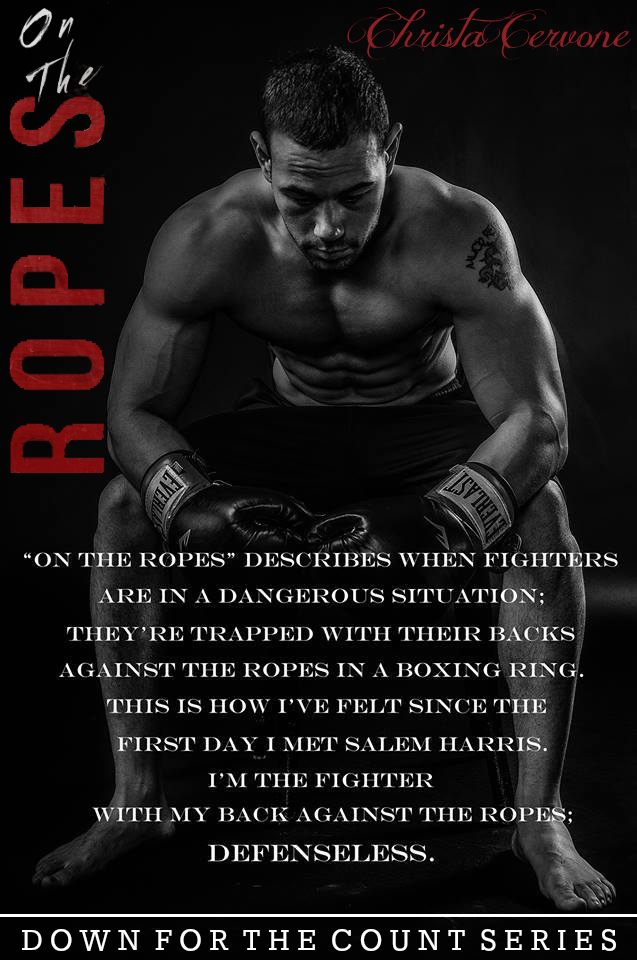 GOING THE DISTANCE:
Boxing saved Gabriel’s life…
From surviving a hellish childhood, to reuniting with his lost brother, only to struggle with helping him battle his drug addiction—a whirlpool of addiction that threatens to drag his brother under. Life’s been a roller coaster for Gabriel ‘The Saint’ Vega… Just when his career hits the fast track, he finally finds love with Salem, at least for a short time. But social differences, obligations, and misguided good intentions tore Gabriel and Salem apart before they could ever really get started. Is Salem capable of breaking away from the ropes that bind her to doing what’s expected rather than what and whom she desires? Can Gabriel convince Salem that their feelings are worth fighting for? Does their relationship have what it takes to go the distance?


Going the Distance is book two in the Down for the Count series.   It can not be read as a standalone, you must read On the Ropes first..  Going the Distance starts where On the Ropes left off.
Gabriel and Salem's story continues and it's not easy for them.   Gabriel gets some advice from an unlikely and it's good advice.
There is a lot that happens in this story.   There are many ups and downs.   Blaine is still around and I could wait for Salem to finally be done with him.  Gabriel and Salem have a lot to work through.  There were some parts that had me teary eyed for sad and happy parts.
Going the Distance was a great story.  I loved reading it and was not disappointing in how the story went int his one.
5 Amazeballs Stars!!!

ABOUT THE AUTHOR:
Born and raised in New England, Christa is a married mother of three. She began writing her first book, Broken, in October 2012, as a love story to her husband, Frank. During the writing process, Christa managed to keep her book a secret from the majority of her family and friends, including her mother. She finally revealed that she had written a book on her personal Facebook page just two weeks before Broken was released. Broken was released in February 2013, and within twenty-four hours of its release, it was on Amazon's Movers and Shakers list as well as in the Top 20 Erotica. Christa released her second novel, On the Ropes - Book One in the Down for the Count series, in February 2014. On the Ropes has also climbed the charts on Amazon, hitting the Top 10 Sports Fiction and the Top 20 Romance Sports Fiction lists. Book Two, Going the Distance, was released July 2014 and claimed the number 3 spot in the Interracial category as well being in the top 20 in Erotica on Amazon. Limitless Publishing has recently acquired the Down for the Count series and will be re-releasing the series under their publishing label in May 2015. Along with the Down for the Count series, Christa's new series titled, Can't Stop Lovin' You, will also be released under Limitless Publishing. The series will have at least four books, Dream On, What it Takes, Sweet Emotion and Hole in my Soul. Dream On is slated for 2015 release.