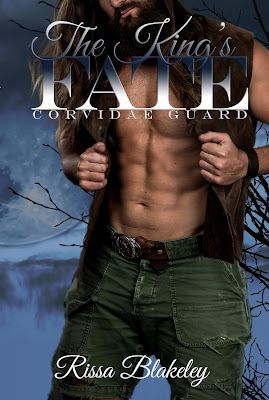 The King's Fate (Corvidae Guard #1)
Genres: Paranormal/Fantasy Romance, LGBT Paranormal/Fantasy Romance
Universal Link: https://books2read.com/TKF-CORVIDAEGUARD-1
Blurb:
In a world where Fae and Vampire will forever be at odds, a Vampire wins the crown, ruling the Fae Realm for the first time in history.After the execution of the Succubus who attempted to murder the King, her Incubus vows to avenge her, putting a devious plot into action. Breaking Fae law, he creates what he thinks will be the most powerful half-breed known to the Realm, placing him as a pawn to make the King feel the pain of death while living.The Incubus shows patience, waiting for the right moment to strike.Upon his half-breed son’s eighteenth year, he conjures images full of romanticized thoughts and desires that pushes his son and the King together, creating a fiery love affair neither could have imagined.Will the Incubus avenge his love?Will the plot bring the King a fate worse than death?Will the King and his male lover survive? 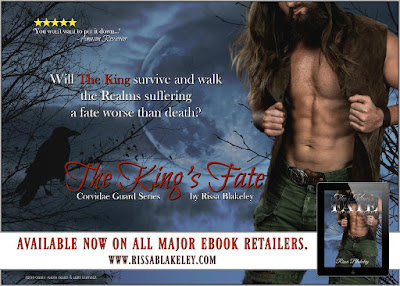 
Excerpt from The King's Fate:
As he relaxed into the chair, enjoying his little piece of paradise, Zachariah sipped on his version of what Eliza called a “smoothie” in one of his finest gold-trimmed stemware. A smile graced his lips, hearing his favorite song fill his ears. A rhythm only he was privy to. It was the sound of hope and peace. Love and understanding. It was a world he had quickly learned to enjoy. And, by Gods, he missed hearing it while locked away in that cave.
He spent his nights and days thinking of the beat thrumming in his mind, echoing in his heart. He thought of the times it raced from heat, and the times it slowed to a mere whisper in the calm. When he heard it again for the first time in two centuries, he could have died a happy male, knowing he had been sought after for so long.
***
Monty walked into the library, lit only by the small fire, shutting the door behind him. His King looked mesmerized by the dancing flames as he tapped his fingers on the armrest to a beat Monty soon realized was his own heartbeat. He held his palm over his heart, feeling the beat growing faster, Zachariah following its rhythm.
“Sire?” 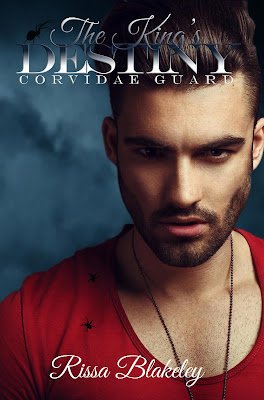 After the execution, the Incubus’s curse takes hold. Bond broken with his mate, the first Vampire to sit on the Fae throne finds solace in nothing. Trying to rid himself of all reminders, he sets on a path of destruction.

In order to save a trusted friend and member of the Corvidae Guard, the King strikes a deal with the Gods, sealing his fate.
Danger is lurking. The Realms are changing. However, most are too worried about their own affairs to pay attention.

Will the Vampire King fulfill his destiny, destroying everything he had built for the Vampire race in the process? 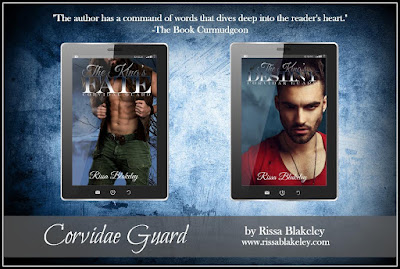 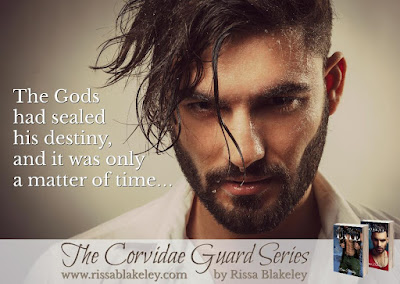 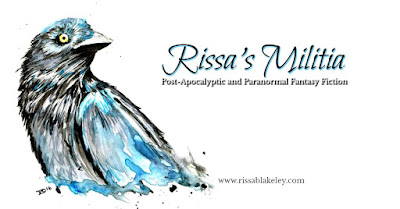 Interview With Rissa Blakeley:
1. Can you tell us a little about your books?
I've written two series. Shattered Lives is a post-apocalyptic five book series that is complete. I am working on the Corvidae Guard series now. It's an LGBT paranormal fantasy romance. I have published two novels in that and am currently working on the third.
Shattered Lives follows a strong cast of characters from all different walks of life. They face everyday problems and relationship issues all while dealing with the zombie apocalypse, which started on Henry's and Elaina's wedding day. It is a true journey, not only for the characters but for the reader as well, it all coming full circle at the very end.
Corvidae Guard started as someone asking me to write a series for him. He wanted an LGBT paranormal series that wasn't specifically geared towards woman, something with bi-sexual and gay relationships. The King's Fate was born from that request.
2. What inspires you to write?
Everything surrounding me inspires me. Something I hear, see... People and experiences. I try to dive hard into the emotions, making the scenes as visual as possible for the reader. For me, I like to see what I am reading. I want that movie in my head. So that is my goal with every book I write.
3. How many books have you written? Which is your favorite?
I have seven full length novels published and one short story that is the manuscript my artists, Diamant, used to create the first Shattered Lives Comic.
My favorite, hands down, is Full Circle, the fifth book in the Shattered Lives series. I love how the series wraps up and truly circles back, connecting the plot points for the HEA.
4. Do you have a special time to write or how is your day structured?
I don't have a writing schedule. I have chronic illness so I do what I can when I can. Some days that means I am what I call "couched" for the day, meaning I cannot do anything at all- home or writing. There are days that I can write for an hour or couple, having to rest in between. It's never consistent.
5. Do you have a favorite food or drink you must have nearby when writing?
Black coffee and seltzer water. I usually have those ready at all times. I don't have any writing foods or snacks.
6. Do you have a favorite spot to write?
Sadly, I don't. I write wherever I can. Even if it's in bed. Some day I would like an alcove with a desk and lined with bookshelves that's in the main area of the house.
7. If your fairy godmother waved her wand and whisked you away to the location of your choice, which place would you choose?
I would love to go to the UK. Part of the Shattered Lives series is set in England. Also, the Corvidae Guard series starts in Wales. There are plans to go to the States. In book three, one character leaves under the King's command and heads to Chicago to find his lost love and child.
8. What are writing projects are you currently working on?
Currently, I am writing The God's War, the third book in the Corvidae Guard series. I'm working on the second draft.
Posted by Gia Guido at 9:00 AM