The Minotaur's Kiss:
A chance encounter brings them together. An impulsive kiss seals their fate.


The dedicated social worker
Dumped by her boyfriend and passed over for a promotion, Diana Miller is sick of always being a good girl--and always finishing last. When she meets an attractive stranger at a work event, she sheds her good-girl persona, and sets out to seduce him.

The jaded enforcer
Like most Minotaurs, Mac Bodie keeps to himself and never lets anyone get too close. He adheres to a strict relationship code: hit it and quit it. Mac can't believe his luck when Diana throws herself at him, offering a night of no-strings, tangled sheets fun. What could go wrong?


Their night of passion leaves Diana sated and ready to focus on her career. But Mac finds it harder to let go. Diana hasn't just rocked his world--she has triggered something unexpected in him. Something that makes him question his lifelong aversion to that fated mate mumbo-jumbo.


When Diana gets a chance to prove herself at work, she thinks it's the perfect opportunity to re-launch her lackluster career. Except her new protector is also her super-clingy Mr. One-Night-Stand!


Her neat-and-tidy life just got a whole lot more complicated. What started as a night of sexy abandon has become so much more…


This debut BWWM story features a spunky heroine and a sexy, brooding alpha male shifter. This book contains vivid descriptions of two characters in love, making love. Not suitable for readers under 18. 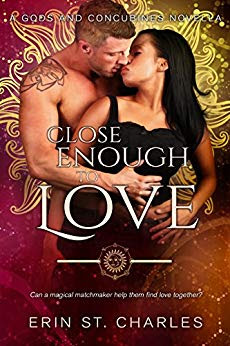 Close Enough to Love:
Jasmine ran for her life
I left Ohio with nothing but a train ticket and my rescue cat, Fat Joey. I thought the pack town of Perdition would be the perfect place to lick my wounds, so I moved into the guest house of the town recluse and settled into a quiet life. But fate had other plans for me.

AJ's world changed in an instant
After witnessing a brutal attack, I wanted nothing more than to go home to Perdition, and be left alone. Then she showed up on my doorstep, and nothing was the same again.

Can they find what they need in each other?
These two committed introverts are looking for solace, not love. But circumstances force an even closer connection. Can they let down their guards long enough to let love in?
https://www.amazon.com/dp/B07FK7VVWM

The Wolf's Concubine
Coming Soon!
Fated mates. A fake engagement. What could go wrong?
Phelan
I met my fated mate and she turned my world upside down. She doesn’t believe we are fated to be together, but I know she's wrong. Now I’m committed to protecting this woman and giving her what she needs--regardless of whether or not she thinks she needs it!
Meeting her didn't go the way I had always assumed it would. Instead of falling into my arms and consummating our mating bond, she stabbed me!
Lola
I have always taken care of myself, thank you very much, and even though I was attacked by the same creature that has been kidnapping women in my city, I don’t need a bossy, overbearing wolf looking after me. I have a plan in motion for my life, and the plan doesn’t include being mated to my so-called “protector.” It’s true he’s got that irresistible wolf charm and he’s sexier than hot, buttered sin, but I have been on my own since I was a little girl, and I know I’m the only person I can trust.
I’ll play along with this fated-mate business for now. But the moment I get a chance to get away, I’ll say to this pushy dude and the nosy people in this backwater pack town.
An enforcer with a hero complex. A woman who doesn’t need anyone. An inconvenient mating urge that cannot be denied.
About Erin St. Charles:
Erin grew up watching Star Trek and reading Barbara Cartland novels (don't hate), wishing she could create something that brings her love of science fiction together with her love of romance. Still a romantic nerd at heart, she writes sensual, diverse stories that blend fantasy, adventure, and love.
Web site: erinstcharles.com
Twitter: https://twitter.com/erinwritesbwwm
Facebook: https://www.facebook.com/erin.st.charles.1
Interview With Erin St. Charles:
1. Can you tell us a little about your books?
My stories are set in an alternate history Earth, where the Pantheon gods and goddesses are aliens who are worshipped by humans. The gods created shifters as a servant class. Eventually, the gods' true nature is discovered and they and their shifter creations were exposed. My stories take place in the near future.
2. What inspires you to write?
I grew up watching Star Trek and loving anything science fiction. I have tried writing contemporary stories, but the real world doesn't interest me. :)
3.  Do you have a special time to write or how is your day structured?
I'm a mom and I work full-time. I squeeze writing in before work, during my commute (with dictation), after work, and on the weekends.
4. Do you have a favorite food or drink you must have nearby when writing?
Rockstar!
5. Do you have a favorite spot to write?
My home office, which doubles as my sewing room. The only thing that rivals my book stash is my fabric stash!
6. If your fairy godmother waved her wand and whisked you away to the location of your choice, which place would you choose?
Hm...probably a hut on the beach with an internet connection.
7. What are writing projects are you currently working on?
Several projects. My next book takes place in the fictional shifter town of Perdition, Texas, and features cameos of characters from my first stories: The Minotaur's Kiss and Close Enough to Love.
Posted by Gia Guido at 9:00 AM