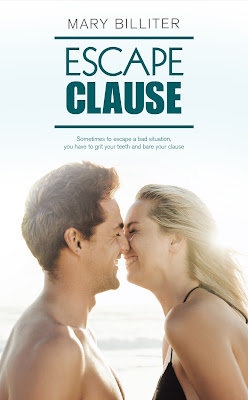 Sometimes to escape a bad situation, you have to grit your teeth and bare your clause.

What happens when the battle lines drawn become blurry? In Mary Billiter’s fun novel of solving mysteries and falling in love, a gorgeous PR guru and a happy-go-lucky single mom are linked by a determination to discover the truth and a sizzling connection.

When competing hotel owners, the Carlyles, attempt a takeover of the former Brubaker hotel, now The Point Resort and also Kelsey Donigan’s second home, the front desk manager discovers long-buried secrets between the two families. Better yet, she uncovers an escape clause that not only prevents a takeover, but may also overtake generations of animosity between the two families.
Kelsey finds an ally in the most unlikely of locals. Hotel heir Oliver Carlyle’s devotion and determination to honor his mother’s final wishes places him in direct opposition with his powerful family.
Can the star-crossed couple save the historic, beachfront hotel, or will they lose each other in the process? 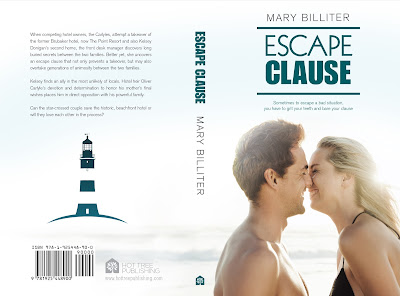 “What’d they do?”
“They cleverly took on the shapes of a pair of fish and jumped in the river to escape the evil giant.”
“Oh.” It felt like all the air had been knocked from my lungs, and my heart plummeted to my empty stomach. I turned and gazed at the stars.
“What? Don’t you like it?”
Tears stung my eyes. I swallowed hard, but my emotions refused to be suppressed.
“Kelsey?”
I raised my shoulders to my ears. “If they became fish, then he would’ve swam away from her.” A tear fell before I could wipe it away. “Venus saved her son, but then she probably lost him. And I understand that a mom would do anything for her child, but I don’t like a story that ends with them separated. Or worse.” I thought of Charlie. What would I do if I lost him? The pain cut so deep it hurt to breathe. I would do anything to save my child, including moving hundreds of miles away from my home.
The look on Ollie’s face could only be described as shocked.
“I’m sorry, I’m being stupid.” I wiped my eyes on the shoulder of my shirt.
“No, you’re not stupid.” He reached into the pocket of his pants and handed me a pressed white handkerchief. “Here.”
I took it and looked at him in disbelief. “I didn’t think anyone carried handkerchiefs anymore. My granddaddy did, but….”
“It’s a Carlyle thing. You know, family tradition and all. It’s proper etiquette to carry a handkerchief, but I’ve never appreciated the custom until now.”
“You’re my knight with a clean hankie.” I giggled and blew my nose. I was about to hand it back to him, but stopped. “Uh, you probably don’t want this back.” I cringed.
“I have an entire drawer full of them. Keep it. It’s yours. Consider it a souvenir of our night.”
I smiled. “Thank you.” I tucked the hankie in my pocket, but I couldn’t erase the thought of being separated from my little man. The fear pulled at my heart in a way only a love for a child could evoke. Charlie was my everything. Tears welled again in my eyes.
He reached for my hand. “Kelsey, it’s okay. The story’s not over yet.”
“Really?”
He wiped away a tear. “Promise. Venus and Cupid swam away to safety, but legend speaks of the tails of the fish being tied together with a gold cord, to avoid losing each other.”
I pulled out his handkerchief to dry my eyes. “Really? They’re tied together.”
“Yes, absolutely. I wouldn’t lie to you.”


Mary Billiter is a weekly newspaper columnist, romance author and college writing instructor. She also has novels published under the pen name, “Pumpkin Spice.”
Mary resides in the Cowboy State with her unabashedly bald husband, her four amazing children, two fantastic step-kids, and their runaway dog. She does her best writing (in her head) on her daily runs in wild, romantic, beautiful Wyoming.
Read more about Mary and her work at: www.marybilliter.com
Follow Mary on Twitter: @MaryBilliter

Author Message to Readers
In May 2016, I was recovering from my second major surgery in the treatment of my breast cancer. My husband, Ron brought my children to the hospital each day of my recovery. At night he’d return. He wanted to ensure that if I ever woke I wouldn’t be alone. My spirits were fading with each surgery. Ron knew and arrived one evening with a Starbucks coffee and his cell phone. He scrolled through pictures of his beloved Oregon coast –and specifically Newport.
“We’ll go there.” He spoke in terms of a future I wasn’t as convinced existed. Still, when visiting hours ended, I’d be alone in my hospital room with my thoughts. I turned them to the Oregon Coast. I dreamt about rushing toward the ocean with my arms outstretched like I could catch the white-capped waves. That dream got me through myriad lonely nights at the hospital.
So when my husband of three years brought my little boy and me to the coast with his Oregon-based family it was better than anything I had imagined. The Oregon coast was a respite and renewal. We toured Yaquina Head lighthouse and I knew then that it was where romance began and ended. As we drove away from our week-long vacation, I began writing this story. I returned home where I failed another mammogram and endured more painful procedures. But the Oregon Coast had revived my spirits. And by December, I was victorious in my battle against breast cancer. It gave my family the happily ever after we long sought.
So “Escape Clause” is for every breast cancer survivor and those still in the fight. Don’t give up. The best is yet to come.

And for those that wants a little escapism, this book is for you!

An Interview With Mary Billiter:
Kelsey Donigan is a fiercely independent single mom who relocates to the Oregon coast with her son Charlie to start a new chapter in their life. To escape her past in order to have a future, Kelsey is willing to work hard at an older, beachfront hotel.

A chance encounter in a lighthouse with hotel heir Oliver Carlyle becomes her second chance for love. Sparks fly and more than just the historic light gets turned on!
In the second grade, I knew I could write. By it wasn’t until I was in my late 20s when I enrolled in a fiction writing course offered through a community college. My journalism degree equips me to write well under deadline, but fiction writing is an entirely different, wonderful beast. From that class, I wrote my first manuscript horribly called, “The Willow.” If that wouldn’t put a reader to sleep, I’m not sure what will! It’s been a lot of learning and honing my craft.
These are great questions! I write the first draft on a computer. Scraps of paper and random notes in my iPhone all contribute to the end product, but ultimately the bulk of the work is written on my laptop.
Coffee. That’s a food group, right?
Another good question! It’s a real toss up – kitchen table in dining room or master bedroom. When I’m writing emotional, intense scenes or sex scenes, I close the door to my bedroom. Everything else, is written with my headphones on in the heart of our home – the dining room.
Always.
Invisibility – then I could write anywhere without any interruptions because no one would see me!
“Escape Clause” is a stand-alone romantic comedy and the second in my resort romance series. I am working on the fourth book in the series, which is based in a haunted hotel. I’m having a kick writing it. I just love having characters in questionable situations and how they respond. It’s hilarious.
Posted by Gia Guido at 9:00 AM