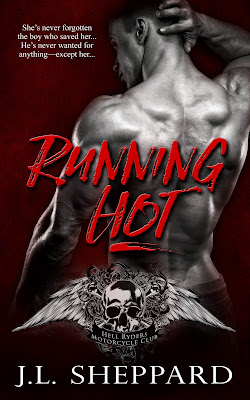 Thomas “Cuss” Layne has never wanted for anything, except the beautiful girl he saved so long ago. But she’s a rich girl, and he’s a biker. For years, he hasn’t had a glimpse of her. Still, he's never been able to get her out of his mind. When her life’s in danger, he rides to her rescue once again. This time, he’s determined to do what he should’ve done long ago—make her his, in every possible way.

Tiffany Hamilton has never gotten over the bad boy with the sapphire eyes and midnight hair, the boy who once saved her. She wants him—a touch, a taste—but he’s never wanted anything to do with her. It’s past time to move on. When the sexy biker barges back into her life, saving her yet again and making demands, he makes it impossible to say no to his raw magnetism. She’ll finally have everything she’s dreamed of…but will it be enough?

Movie wasn’t halfway done, and his girl had already passed out. Head on his shoulder, legs on the couch to her other side.

Smiling, he took a breath. Her head on his shoulder slipped lower. He wrapped an arm around her, turning toward her slightly until her head lay on his chest. Either he’d gotten good at doing that or she was a heavy sleeper. Probably the latter, not once when he carried her to bed had she woken.

She let out a small sigh and burrowed into him.

He loved that. She did it a lot, and every time she did it, it made him feel like he had the world in the palm of his hands. Maybe not his hands, but he definitely had the world sleeping against his chest.

His gaze slid from her face to her hair. He threaded his fingers through it. So soft. So thick. He spared a glance at the television and realized he missed an important plot point. Now, he was lost. Nothing new. He never paid much attention to the movie once she dozed off. He just sat there and watched her sleep. Often, he ran his hand through her hair like he was then. Every once in a while, he looked to the screen. And when he did, he remembered the movie would be over soon, and then, he’d have to force himself to stop staring at her, carry her to bed, and head home.

He hated it, hated leaving her.

And still, it had to be done.

Her eyes narrowed, but she kept her cool, speaking low and calmly. “Go to hell, Cuss. I don’t need saving especially from you.”

The muscle in his jaw jumped. Breathing heavily, each of his breaths hit her face. “Want me to count all the times you needed me?”

Would he? Even the thought sprung tears to her eyes. Truth, she didn’t know if he would. As good a man she knew him to be, he also shut her out of his life.

She wouldn’t stand there and find out. She turned on her heel.

He snaked his arm around her waist, tugged her to him until her back pressed against his chest. Then he lifted her off the ground.

The warmth of his body consumed her. Her body, betraying her, molded against his. She forgot why she was angry, why she had every right to be.

She had to focus, had to remember. “You want to let Blaze, Rake, and everyone who walks by know if it hadn’t been for you, I could’ve been raped, twice? Or no, three times, if you count my stalker.” Her voice trembled.

His whole body tensed. If she hadn’t felt his heart pounding against her, she would’ve thought it’d stopped beating he was so still.

His arm around her waist tightened, leaving her without breath. Simultaneously, he covered her mouth with the other, muffling her words. “Shut it, Tiff. Fuckin’ shut it before I lose my shit,” he whispered against her ear, voice low and laced in rage.

The flood of tears she held back slid down her cheeks and onto his hand.

When the perfect life Alyssa Holden planned turns out to be a life of lies, she runs to her brother, the only person she can trust. She has no idea she’s running straight into a world of badass bikers who live and ride by their own rules. One tatted rebel in particular calls to her wilder side, and while everything in her draws her toward him, every experience she’s had with men warns her away.

Jace Warren is doing what he’s done his whole life—trying to survive, making the best with what he’d been given. The only life that makes sense after the military is Hell Ryder’s Motorcycle Club, but the sweet innocence of his army buddy's sister promises a different life, one a man like him can only dream of. Problem is, being his MC brother’s sister puts her off limits. Hard as it is, he keeps his distance. Then she kisses him, and all bets are off.

J.L. Sheppard was born and raised in South Florida where she still lives with her husband and son.

As a child, her greatest aspiration was to become a writer. She read often, kept a journal and wrote countless poems. She attended Florida International University and graduated in 2008 with a Bachelors in Communications. During her senior year, she interned at NBC Miami, WTVJ. Following the internship, she was hired and worked in the News Department for three years.
It wasn’t until 2011 that she set her heart and mind into writing her first completed novel, Demon King’s Desire, which was published in January of 2013.