She’ll give in to the darkest power to gain their freedom.
Five years ago, Lawrence Kincade walked away from the underground resistance, having lost all she loved in the fight against the Party—her friends, her family, her freedom to use her magical ability. Everything.
Since then, she’s been in hiding, trying to come to terms with living outside a society that now reviles everything she values. But when she learns the Party has reinstated the extermination policy in the Purity Camps, she realizes she can no longer remain apart from the fight.
As Lawrence attempts to rejoin and revitalize the resistance she abandoned, she must once again seek out allies, often in unexpected places. With the help of a surprisingly sexy shifter who prowls the streets of post-apocalyptic Birmingham, Alabama, she’ll have to deal with the last place she ever wanted to end up, and the first on the Party’s list to be eradicated: Purity Camp D.
With a little luck and a lot of work, maybe she can save the prisoners using her own brand of Underground Magic. 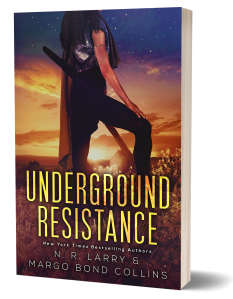 Margo Bond Collins is a New York Times and USA Today Bestselling author of paranormal romance, contemporary romance, urban fantasy, and paranormal mystery.
She lives in Texas with her daughter and several spoiled pets. Although she has a Ph.D. in eighteenth-century British literature and teaches college-level English courses online, writing fiction is her first love. She enjoys reading urban fantasy and paranormal fiction of any genre and spends most of her free time daydreaming about heroes, vampires, ghosts, werewolves, and the women who love (and sometimes fight) them.