Release Blitz for Big, Bearded and Brilliant by Kat Baxter 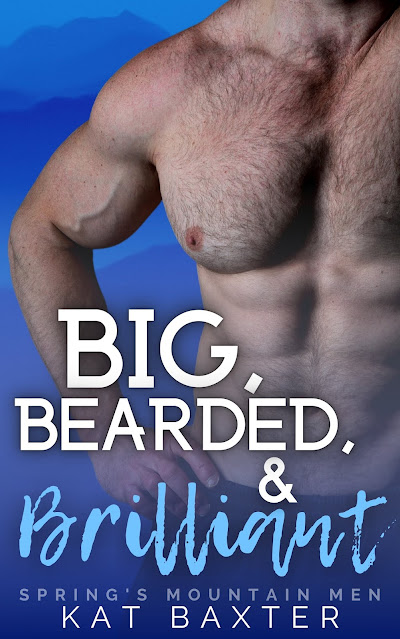 This reclusive billionaire mountain man was committed to bachelorhood, until he met her.
Jefferson Black escaped to a secluded mountain cabin to get away from his reputation as the most eligible billionaire bachelor. Three years later he’s nearly unrecognizable wearing flannel and a scruffy beard. When Molly Hart accidentally hits Jefferson with her car, she insists on being his caretaker. Despite his injuries being minimal, the grumpy tech genius is drawn to her sunshiny personality.
After fleeing to the mountains to escape her cheating ex, Molly is one bad decision away from being a certifiable hot mess. And then she literally hits the sexiest man she’s ever seen with her car. Now they’re trapped together in a cabin. Can one heated night together convince them that commitment isn't so bad after all?
If you love grumpy, growly men who fall for sweet, awkward women, then this instalove mountain man romance is for you! 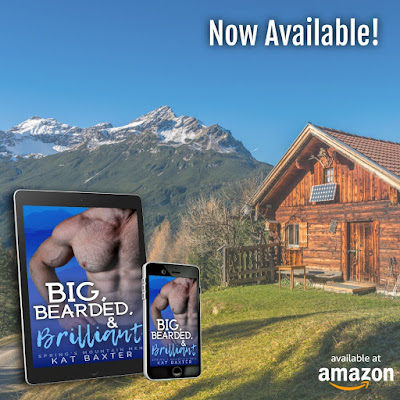 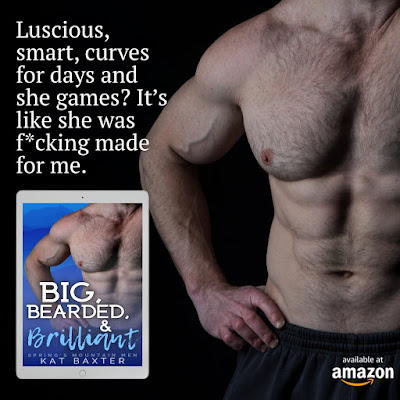 “I hit you with my car,” I say. Just call me Captain Obvious.
He starts to stand, and I practically lunge for him. “You shouldn’t move! You might have a neck injury!”
He just stares at me while I continue to say all the dumb things running through my head.
“Do you need the hospital? Do you think you have internal bleeding. Oh, or a concussion?”
Oh my God. Why am I still talking?
He still doesn’t answer. Instead he leverages himself to a standing position all with the usage of only one leg and his arms. His other leg he kind of hovers over the ground, not putting weight on it.
“Oh my God, did I break your leg? Shit, I’m such a disaster.” I wedge myself under his arm, and then brace my arm around his waist. “Lean on me.”
“I’ve got it,” he growls.
“Don’t be a baby, I can help. It’s my fault you’re injured.” I shouldn’t notice how divine he smells, but I do. Because that’s me - if a moment can be made awkward or inappropriate, I’ll be the driving force.
But this is next level, even for me, because I nearly just killed him and I should not be sniffing him!
But seriously, as we clumsily make our way to the front porch, I want to bury my face in his neck and inhale him. It’s like pine and fresh water and linen and a summer rainstorm and sexy man all rolled into one.
He’s also massive. I’m not a tiny woman. I’m not tall, but I’m not small. If I was being politically correct I might say I’m big boned, but the truth of the matter is, I’m what the media would call plus sized. I have big boobs, a tummy, big hips a big butt. I’m just full of curves and bumps and I’ve been in my own skin enough to love myself, but I know I’m not what most men want.
“I’m not being a baby,” he grumbles with that low, sexy voice of his. “You’re the size of a child so I’m not sure how leaning on you is going to help me.”
“I’m not the size of a child!”
“Pretty much,” he grumbles.
“Now that you’re actually speaking to me, do you need to go to the hospital?”
“No.”
“Are you sure? Because you could have a concussion. Nearly four million people get concussions every year. True, most of those of sports related, but—”
“I don’t have a concussion. You bumped me. I fell down. That’s it.”
“A good percentage of traumatic brain injury related deaths are due to falls, particularly among small children and the elderly.”
His gaze narrows as he stops walking to glare down at me. “I’m not fucking elderly.”
I swallow and then clear my throat. “No. You’re not. Obviously. You’re—” A huge, sexy beast of a man. Who is not fragile or elderly.
Every cell in my body lights up with neon flashing signs. Not safe! Not safe! Not safe!
And those neon signs aren’t worried at all about my physically safety. No, this guy isn’t giving off any serial killer vibes. He’s giving off sexy, beast man vibes. The kind that effortlessly tear down the defenses of demur homebodies like me.
Woozza.
I am in so much trouble here.
Except, I’m not. Because he’s a sexy beast and I’m … well, me.
Then again, as we stand there in the sun-dappled shade in front of his house, with his arm around my shoulders and my body wedged so close to his, his gaze shifts from a glare to something else as his eyes roam my face and then drop to my lips.
And I get the strangest sensation that he’s thinking about kissing me.
Which is totally ridiculous. Because men never think about kissing me.
“Yep,” I say out loud. “You have a concussion. Almost definitely.”
Why else would he be looking at me like that?
“I don’t have a concussion,” he says, taking another step toward the house.
Regardless of what he says, I am helping him. “I’m like your human crutch,” I say brightly, trying to make him at least crack a tiny smile.
There’s no way I’m letting him tackle those steps by himself. What if he falls again? Which seems very likely given his befuddled state.
He grunts. “That’s not what I’d call you.”
Rude.
Once we reach the porch, he holds onto one of the thick wooden beams and hops on one leg up the stairs. It’s an impressive feat of pure, unadulterated strength and I’m not unaffected. Nope, I’m staring at his ass muscles moving beneath the denim of his jeans.
“You have very good muscle control for someone with a concussion.”
“I don’t have a concussion.”
“We’ll see.”
Only I would manage to find the hottest man in the world in the middle of nowhere in the mountains and then hit him with my car. 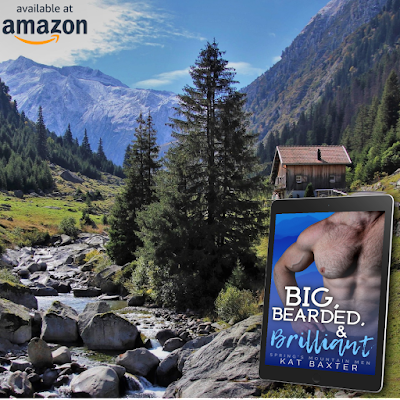 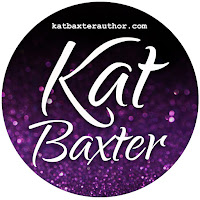 Kat Baxter writes fast-paced, sweet & STEAMY romantic comedies. Readers have dubbed her books “laugh-out-loud funny,” “hot enough to melt your kindle,” and “The Queen of Adorkable.” She lives in Texas with her family and a menagerie of animals. Kat is the pseudonym for a bestselling historical romance author.
Connect with Kat online.