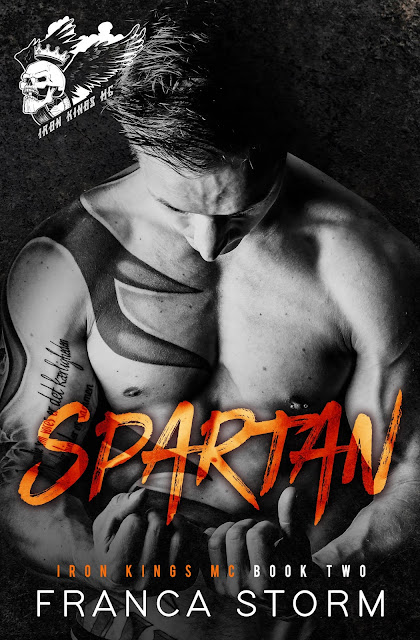 A king to hardened, dangerous men.
I’m the President of the Iron Kings MC.
Their rock-solid leader.
A tried and tested warrior.
I don’t bend. I don’t break. I don’t lose it.
But something’s pushing me to my limit.
He’s still out there, the psycho who took everything from me.
Vengeance is burning through my veins.
I can’t move forward.
I can’t let it go.
Then she wedges herself into my life.
The feisty blonde, all toughness and attitude.
She calls to me, distracting me from my mission and easing my rage.
But I destroy anything I touch.
The women who get too close end up dead.
I can’t let it happen again.
There’s no room for love anyway while I’m holding onto so much hate.
ADD TO GOODREADS 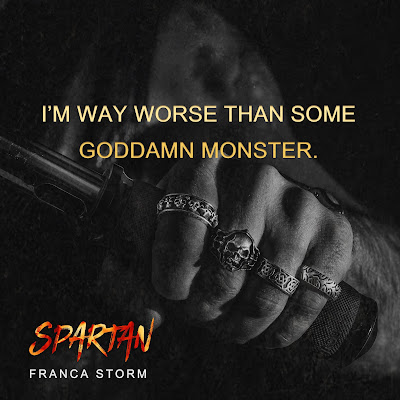 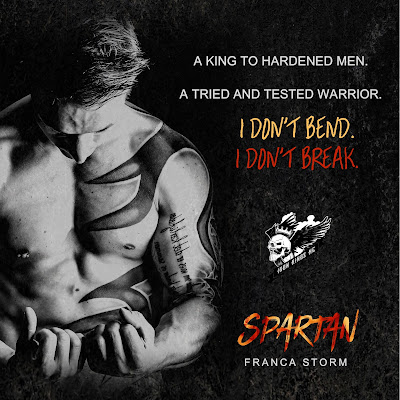 EXCERPT
I pushed out of the locker room and made a sharp right for the bathroom, shoving open the heavy door and strolling inside… right into a half-naked body.
“Holy shit!”
I inadvertently dropped my bag in my shock. As I tried to reach for it, I tripped on the handle and lost my balance, smacking right into the wall of hard, inked, rippling muscle in front of me.
It was like some kind of clichéd meet-cute scenario ripped from a cheesy rom-com. Except I was already very familiar with Scott “Spartan” Tate. Now, with my body squished up against his half-naked body, intimately familiar.
“Uh… sorry,” I mumbled, feeling my cheeks burning with embarrassment.
I pressed my hand to his chest for leverage to push myself off him.
A rumbling chuckle came from him as I steadied myself and stepped back, averting my eyes quickly.
Was he seriously laughing at me? Agitation transcended my embarrassment and I found myself yelling, “Why the hell didn’t you lock the door?”
“Lock’s broken,” he answered simply. “Why didn’t you knock?”
“I was in a rush.”
“You gotta be more careful.”
My gaze shot to his. Was that a start of a lecture?
He went on, “The guys here ain’t safe for you. Some of them have got their eye on you. What if it weren’t me in here right now?”
Okay, that was actually really sweet.
It had me softening and forgetting about my need to save face through being harsh and dismissive. My go-to basically when I felt ill at ease.
Spartan didn’t deserve that.
I nodded. “Okay, yeah.”
He smiled then slipped his fingers into the waistband of his sweatpants, starting to pull them down.
“What are you doing?”
“Changing.”
“Right now? In front of me?” I shot a glance over my shoulder. “With the door open?”
He shrugged. “Ain’t got nothing to hide.”
I tutted and turned and walked to the door, closing it.
When I turned back around, my breath caught in my throat at the unbelievable sight before me.
His pants were pooled on the floor at his feet and he stood there rifling through his duffel bag completely naked. Even more startling than that was the fact that his dick was hard, raging even. Two studs glistened in the head.
Holy hell, he was magnificent.
Sculpted muscle everywhere. Built like a frigging Viking warrior of old. Ink covered his right shoulder and stretched around and down to his chest. There was another tattoo on his upper back, as well as the crest of the Iron Kings MC on his inner forearm, a skull with wings and crown on what looked like a motorcycle. I was a sucker for men with tattoos.
Everything about Spartan was perfection, even his dirty-blond hair was styled all sexy, short and cropped on the sides but wild on top. He had several piercings in both ears, a hoop hanging from his left eyebrow and a stud in his nose. His eyes were a uniform shade of slate-gray, no break in the color, just purely that. The thick stubble over his jaw had replaced his normal clean-shaven appearance.
It was weird being up so close and personal with him today. I hadn’t seen him for a while, because, right after a rumored war between his club and the formerly notorious Rogue Riders MC, he’d disappeared, hiding out in his clubhouse, according to the talk around the nosy town of Ridgefield.
“You gonna join me, or what?” he asked.
I jolted, my eyes snapping back to his face. Talk about being caught out. He smirked slyly, letting me know that he’d caught me checking him out.
“Uh… what?”
“Are you gonna get changed?”
Oh, right. That’s what he’d meant. Get a grip, Dani!
“I’m fine if you just wanna keep drooling over my cock instead.”
Oh God. This whole situation was mortifying. I couldn’t actually believe he’d just said that. It was so brazen. No, that didn’t even cover it. I didn’t know what the hell to say to that. I ended up stumbling over my words, mumbling, “I… just put it away.”
“You sure?”
“Yes, I’m sure. God!” I turned away and muttered over my shoulder. “And why is it—why are you—hard?”
“Some smoking-hot babe had her hands on me, offering herself up for a good fucking.”
I stilled at his words. “Oh.”
I'd had that much of an impact on him? Just that brief touch had gotten him that worked up?
“Surprised you ain’t jumped me yet. Just the two of us in here, me already naked, you all worked up. What’s stopping you? All this shyness and shit ain’t the message you were sending my way a few minutes ago. Hell, it ain’t what you been sending me since I known you.”
I cringed. I was messing it up big time. This was not how I’d imagined it going with him.
I was supposed to be the one leading the charge. I knew he was gun-shy. Everybody in town was familiar with his tragic story. So, I’d always been the one to ease things along, to initiate our banter, our flirting, all of it.
And I liked it that way.
Being in control of it, of what happened or didn’t happen, made me feel… safe.
After everything that’d happened to me, I had to operate that way. 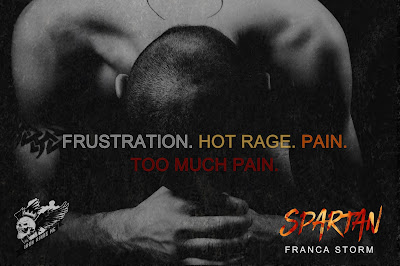 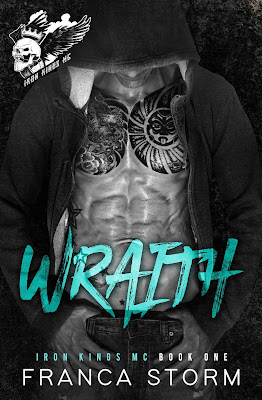 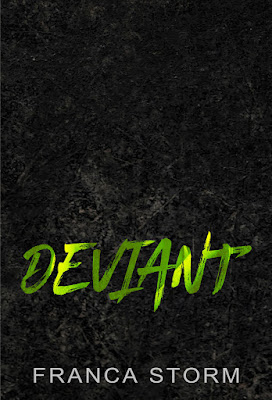 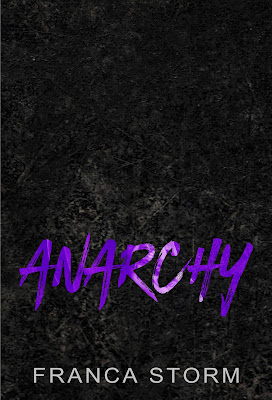 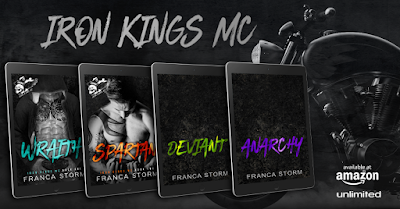 Succumb to a Bad Boy.

Franca writes stories about bad-boy alpha males and the tough women who turn their worlds upside down.

She is best known for her motorcycle romance series, BLACK THORNS.

When she's not writing, Franca enjoys watching action movies and binging on great TV series. Spending time with her lovable lab, hiking, and listening to hard rock, are her passions. 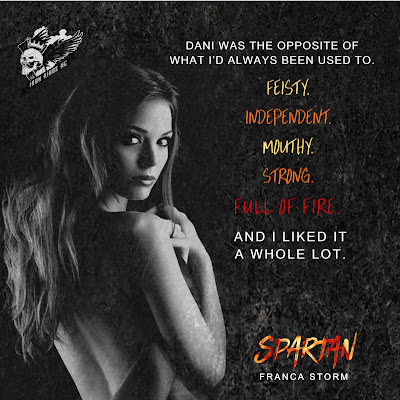