Book Blitz for Why Liv? by Jon Sebastian Shifrin 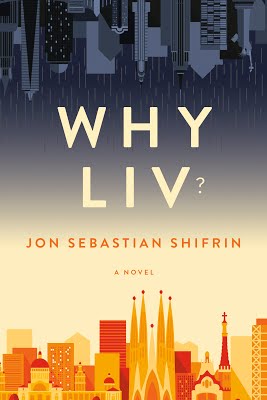 As a twenty-something corporate employee with a doctor-in-training girlfriend, Livingstone Modicai Ackerman—Liv, to his friends—personifies success. Yet all is not as it seems. His job is tedious and soul-gutting, his girlfriend is a vacuous, image-conscious snob, and, meanwhile, his pathologically narcissistic parents are constant irritants. Add to this the febrile political climate dominated by a reactionary group, the Patriot Posse, led by a mendacious radio personality with outlandish hair and catchy campaign slogan to “Make America Great Again,” is a presidential candidate—and he’s winning!

Overwhelmed and struggling to maintain a sense of dignity and worth, Liv quits his job, breaks up with his girlfriend, and leaves for Spain to explore the existential question: Why live?

Told with humorous charm and wit, Why Liv? examines why modern work is so devoid of purpose and why reactionary politics is so alluring in America. Most of all, it humbly attempts to offer a reason to persevere during difficult times.

The Comitans, huddled together like penguins in the Arctic cold, waved posters at passing cars, cheering heartily when one honked in approval. “Guns not Butter,” one sign read. Another, “When Liberals Lead, Freedom Bleeds.” And, predict- ably, “I’m John Galt.” I nearly ran headlong into them.

Goddammit, I thought. Why now?

The Comitans were a menacing omen. Others existed, of course, like the rain. New York was in the midst of a record, nonstop deluge. Some claimed it was global warming, but most climate models predicted the East Coast would see less rainfall, not more. It had something to do with shifting currents in the Atlantic. Convection, I believe.

Then there was the economic crisis. Nobody could have seen it coming, right? A speculative bubble, evident only after the fact. That’s finance. Good years, bad years—the price of prosperity, supposedly. Not really. It was perfectly predictable. The signs were clear.

However, the Comitans were altogether different. After all, you could adjust to the lousy weather, but did it even matter if you went to work? Sunny weather only drove home the cruelty of cubicle captivity. As for the Wall Street-induced economic crisis, sure, it was ruinous, but mostly for those at a comfortable remove. For the wealthy, it was just momentary turbulence in the first-class cabin, a mere hiccup. The rich never paid for their misdeeds; the poor always did, even if blameless.

The Comitans were genuinely frightening and completely impossible to ignore. No sooner had you forgotten about the noisy irritants than a new crop arrived, spewing hate like crazed soccer hooligans and accosting you as you left the grocery store.

At first, I doubted they would ever converge on the city. It was a reasonable expectation given that, initially, they mostly stuck to their southern strongholds, holding rallies in places like Biloxi, Mississippi, and Decatur, Georgia. But then they began to spread, like a toxic contagion.

Although they kept getting closer, it still seemed unlikely they would actually breach the city limits. New York—cosmopolitan, progressive, diverse—personified the evil they detested. Why come at all?

But they did. It was a modern-day sacking of Rome. Thousands converged on Manhattan on chartered buses that discharged them into Midtown, from where they strategically fanned out across the city, heckling and jeering and picking fights like rabid dogs along the way.

I first spotted them in my neighborhood a few weeks ago. After that, my encounters were mostly from a distance, though each time less so. I should have expected the inevitable. After nearly colliding with a dozen or so of the rabble-rousers after turning the corner of Fifty-Second Street, I did what any New Yorker would do when crossing paths with the deranged and possibly dangerous: I stared ahead blankly. Streetwise. That’s what Gotham’s concrete canyons required.

In my peripheral vision, I caught sight of a seemingly dis- embodied hand from the huddled mass, finger pointing at me accusingly, and a swarm of sneering faces. Over the music playing on my earbuds, a “fuck you” registered, along with some other choice insults. I did not linger. The rain was getting heavy, and I was late for work.

“Looks like you’ve seen better days, Liv,” Jay said as I staggered into the office, soaked to the bone. On a positive note, I was relieved to have survived my first direct contact with the Comitans unscathed.

“Every day is better than Monday,” I sulked.

Jon Sebastian Shifrin is a writer plying his trade in Washington, DC. His work has appeared in The Baltimore Sun, The Hill, Reunion: The Dallas Review, The Missing Slate, The Indian Review, and Futures Trading. Jon also is the founder of the popular current events website, The Daily Dissident (www.dailydissident.com). His non-literary career in politics has taken him from the White House to Capitol Hill to think tanks in Washington and Europe. To learn more about Why Liv?, visit www.whyliv.com.