Release Blitz for All or Nothing by Missy Johnson 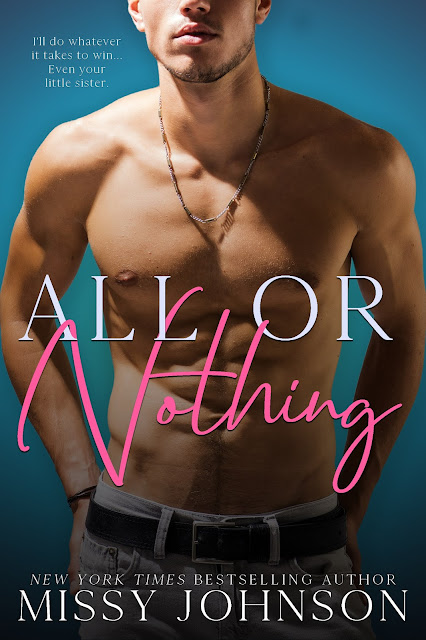 BEN
Seven days to find myself a wife, or my best friend gets my company.
All because of a stupid, drunken bet.
Charming a woman into marrying me should be easy.
And it would’ve been,
if Jake wasn’t doing everything in his power to sabotage me,
like stranding me on a boat full of horny pensioners—including our moms.
But Jake’s little sister, Liv, tagged along.
Under any other circumstance, I’d never go there.
But if he’s going to play dirty,
then so am I.
LIV
I haven’t seen Ben since I was fourteen years old.
Until last night, when he tried picking me up in a bar.
He had no idea who I was then, but he certainly knows now.
Second chances don’t come around often,
but I don’t think I’m supposed to take this one.
He’s my brother’s best friend, and he’s off-limits.
No matter how much I want to go there.
ADD TO GOODREADS 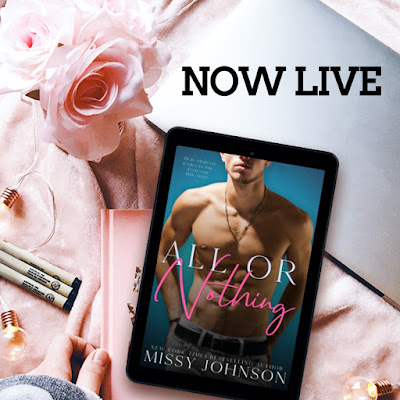 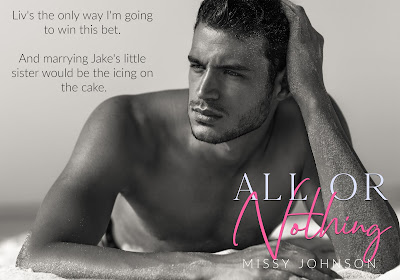 EXCERPT
“Shall we test that theory, then?”
I jump at the sound of the sexy British accent coming from behind me in the next booth. There’s a familiarity to his voice that catches me off guard, but I can’t quite place where I know it from. I swallow, because Tara wasn’t kidding about the accent thing and this guy sounds like a snack.
Oh shit. Tara. He must’ve been eavesdropping on our conversation.
“What theory is that?” I ask, both annoyed and embarrassed.
Then I tell myself off for getting ahead of myself, because I don’t even know for sure he overheard our conversation—
“The one where your will panties soak at the sound of my accent.”
Okay. Now I’m sure.
“What, no response?” he teases. “We can talk about something else if you want. Like how your friend abandoned you?”
“She’s getting our drinks,” I reply.
“This has got to be the longest drink collection in history,” he remarks. “And I’m pretty sure I saw her disappear around the back with the guy behind the bar.”
I’m not sure whether to believe him or not, but she has been gone awhile, and I’m more than a little worried she’s been kicked out for being underaged.
Me: Did you get caught?
Tara: Sorry. Distracted. Turns out Germans really do have long tongues ;)
I groan inwardly and set my phone down on the table.
Way, way too much information.
“Yeah, she’s abandoned me,” I grumble.
“I guess I’ll join you, then.”
I sit straight upright, because suddenly, he’s right there, sliding into my booth across from me. My eyes widen, because this isn’t just some random guy trying to hit on me. It’s Ben, my brother’s best friend, the source of the rumors all those years ago, and the one person I didn’t want to run into. Ever.
I silently curse Tara for choosing this bar of all places, and then I hold my breath and wait for the recognition to spark in his eyes, but it doesn’t. I stare right at him and he smiles back, his lopsided grin enough to send my heart into overdrive. My heart thumps as it hits me.
He has no idea who I am.
“Are you okay?”
I jump at the sound of his voice and force myself to nod.
That accent sounds so fake now that I know it’s Ben. I have to stop myself from laughing. Is this what he does, hang around in bars, pretending to be someone he isn’t just so he can pick up? I shiver at the thought of going home with him, because silly accent aside, he’s still the sexiest thing I’ve ever seen.
He’s even hotter than he was the last time I saw him, which was almost six years ago. Those intense green eyes feel like they’re penetrating my soul and every now and then he casually rakes his long fingers through his dark, short cropped hair. When he rubs his lightly stubbled jaw, I lean forward as my nipples harden against the raw silk of my top.
“Cold?” he smirks.
I go red.
He nods at my arms in explanation. “Goosebumps.”
Oh.
“I’m Ben, by the way.”
“I’m…Louise,” I finish, using my middle name instead of Liv.
“Louise,” he repeats, my name rolling off his tongue. I swallow, because my middle name has never sounded so sexy. “So, you’re alone and I’m alone …”
“It appears that way,” I squeak.
“So…” His eyes meet mine. “No panties, huh?”
Oh god.
I’m so embarrassed. I look away and immediately wish I hadn’t. My heart races as I spot Jake walking toward the exit. When he stops and turns around, I do the only thing I can think of; slide under the table until I’m on the floor, much to the amusement of Ben.
He peers down between his legs, a smirk on his lips, like he’s trying to work out what the hell I’m doing. My face flames, because God only knows what he’s thinking—probably that all his dreams are about to come true.
“I’m not going to lie, this has taken a turn I wasn’t expecting,” he admits.
“Don’t flatter yourself,” I snap, my face even redder. “I dropped an earring.”
Really? That’s what I’m going with?
“You dropped an earring?” he repeats, a bemused smile on his face. “Is that even a thing? Do earrings really pop out at the most inconvenient of moments that leave you crouching between the legs of your date?” He leans down so we’re face to face. “Funny, looks to me like you have both earrings where they should be.”
“Date?” I chortle, conveniently ignoring his observation. “When did this become a date?”
“When your friend abandoned you and I felt obligated to step in?” he suggests. 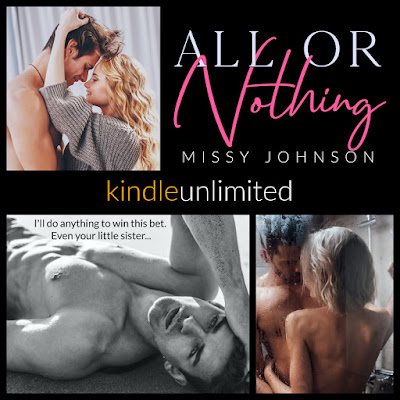 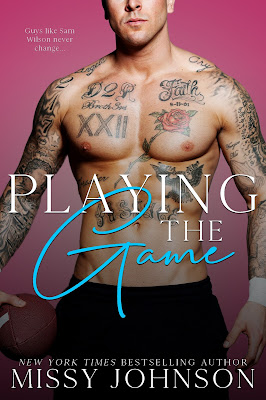 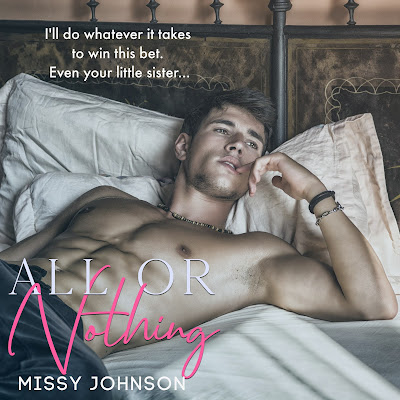 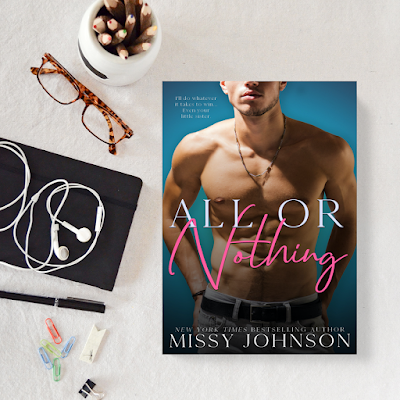