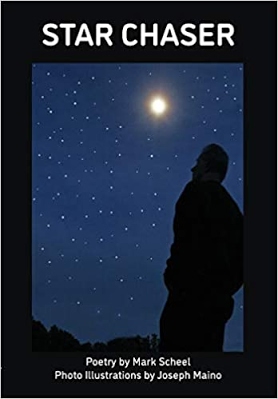 Mark Scheel's Star Chaser is "a creative burst exploring the relationships among ancient legend, the life cycle, the autobiographical and modern day angst." Divided into three sections: "Yesterday," "Today" and "Tomorrow," this division signifies the reality all of us must confront living our lives. In the first section, the poem "Merging" might be seen as symbolizing conception as well as foreshadowing both young adulthood and growth.

“Scheel transports readers to a place where ‘yesterday and tomorrow are one.’ These poems evoke time, timelessness, and human mortality with aching poignancy—leaves underfoot in Kansas City's Loose Park, creases forming in garden gloves, one man's numb-standing new respect for his Harley-Davidson, the wistful sounds of a distant night train. Scheel's elegant and evocative images ignite memories and wishes not only within the voice of the poems themselves but also within the heart of the reader.”

Mark Scheel grew up in east-Kansas farm country.  Prior to writing full time he served overseas with the American Red Cross, taught at Emporia State University, was an information specialist with the Johnson County Library in Shawnee Mission, Kansas, and a prose editor for Kansas City Voices magazine.  He co-authored the book Of Youth and the River: the Mississippi Adventure of Raymond Kurtz, Sr. and his collection of stories and poems, A Backward View, was awarded the 1998 J. Donald Coffin Memorial Book Award from the Kansas Authors Club.  His blog series, The Pebble: Life, Love, Politics and Geezer Wisdom, was published in book form in 2015, and his fiction collection, titled And Eve Said Yes: Seven Stories and a Novella, appeared from Waldorf Publishing in 2019.