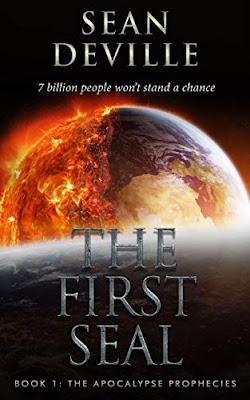 
If you survived the coming apocalypse, would you envy the dead?

Hidden in the darkness, a secret war has raged between demons and fanatical religious assassins for centuries.
From childhood, Lilith was trained into the ranks of an elite Order of Assassins. Her sole purpose is to hold the line against the Satanic hordes.

But the balance has shifted.
The Seven Seals holding closed the Gates of Hell are weakening, for unseen and unknown, a dark force has risen upon todays Earth.
The Antichrist, a man of wealth, power and unspeakable destiny has risen and is ready to reveal himself.

The End Times of Biblical prophecy are finally here, and 7 billion people won't stand a chance.

"The First Seal" is book 1 of a 7 book apocalyptic horror series recounting the final days of human civilisation.
https://www.amazon.com/gp/product/B0893L5S1C

Sean Deville fell into the world of apocalyptic fiction with his first zombie novel, "Cobra Z" which was book 1 in his Necropolis trilogy (Cobra Z, The Contained, Necropolis - published by Severed Press). He followed this up with the stand-alone horror novel "The Defiled" which is a dark end of the world tale of horror and suspense. With "The Spread" (first book in the Lazarus Chronicles), Deville gives you everything you need for your apocalyptic and post-apocalyptic yearnings.
All he ever wanted to do was bring darkness into the light.

1. Can you tell us a little about your books?
For some reason, I write apocalyptic fiction. This has so far ranged from zombies, through aliens, to the Antichrist. These are either in novel form or as short stories that I tried to make easy and quick reads.

2. How many books have you written? Which is your favorite?
There are 3 books in the Necropolis trilogy, which was the first books I wrote.
There are 5 books in my Lazarus chronicles.
I’m presently writing a 7 book series called the Apocalypse Prophecies, and have just finished book 3.
Technically though, I count this as only 3 books because they its 3 different stories.
There are also two stand-alone novels. The Defiled, and a short story collection. There is some earlier works, but it really isn’t any good…so I’m not counting those lol.
I’m not sure I’ve got a favourite though.

3. Do you have a special time to write or how is your day structured?
I write 5-10 pages a day. No set time, I just get round to it and can usually bash off a novel in 1-2 months. I don’t have a day job (retired) so there’s nothing but my own laziness to stop me getting the words down.

4. How do you come up with your characters names?
Lol. With rare exceptions they are just randomly chosen. My latest novels are different because the series is based on the book of Revelation, and as such there needs to be a lot of religious symbolism.

5. If you could be friends with one of your character, which one would you chose?
All my antagonists are either morally flawed, emotionally stunted or psychologically damaged. Some are even anti-heroes, so I’m not sure there are any you would want to go out for a beer with. My protagonists are invariably cold, heartless sociopaths or individuals driven by zealotry. If you want to get through the apocalypse though, Colonel Nick Carter from the Lazarus Chronicles is your man.

6. For someone who hasn't read any of you books yet, which one would you suggest they read first?
Easy, but one of the short stories. There are nine of them, and two are perma-free on Amazon. It will give you a good idea of my writing style. My favourite one is Black Cross, which is a first world war story about zombies in the trenches. The thing you need to know about my books are, because they are apocalyptic, they have a lot of characters with numerous story arks that all come together in a grand climax.

7. If you had a superpower, what would it be?
As someone who has suffered chronic ailments most of my adult life, it would need to be super healing, Wolverine style.

8. What writing projects are you currently working on?
I’m doing a 7 book series based on the book of Revelation. It’s got demons, the Antichrist, and fanatical religious assassins. Based in modern times, it’s an apocalyptic bloodbath that spans the whole globe.
Posted by Gia Guido at 9:00 AM