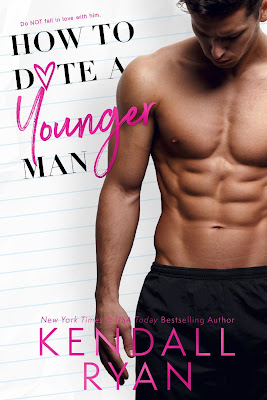 Tips for Surviving a Fling with a Sexy Younger Man

First, you’d think as a thirty-something-year-old woman, I’d be immune to Griffin’s flirty comments and six-pack abs. You’d think that his carefree playboy attitude, or the fact that he’s still finishing grad school, would deter me.

If you accidentally bang your best friend’s younger brother, here are a few important tips . . .

One: Do not brag to your friend about how well-endowed her brother is.

Two: Do not go back for seconds (or thirds).

Three: Do not let him see your muffin top or jiggly behind. And definitely don’t let him feed you cookies in bed. Cookies are bad. Remember that.

Four: Act like a damn grown-up and apologize for riding him like a bull at the rodeo. And do not flirt with him when he laughs at said apology.

Five: This one is crucial, so pay attention.

Do not, under any circumstances, fall in love with him. 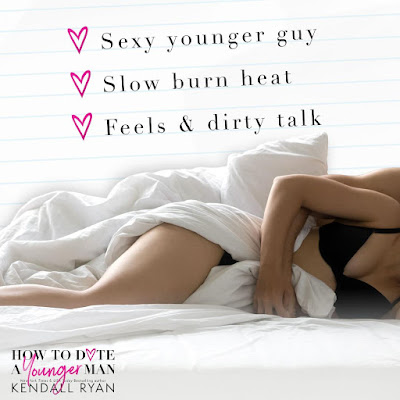 Review by Gia:
How to Date a Younger Man is a good read.  Layne is a hard worker.   She's a successful lawyer and has put her personal life on hold to get to where she is professional.  Griffin is ten years younger than Layne and Layne's best-friend's brother.  They  have a connection but Layne is hung up on the fact that Griffin is younger.   They build a great friendship.  At points I felt it was going a little slow but I couldn't stop rooting for these two to become move then friends.
4 Stars!

A New York Times, Wall Street Journal, and USA Today bestselling author of more than three dozen titles, Kendall Ryan has sold over 3 million books and her books have been translated into several languages in countries around the world.
Her books have also appeared on the New York Times and USA Today bestseller lists more than 100 times. Ryan has been featured in such publications as USA Today, Newsweek, and InTouch Magazine.

She lives in Texas with her husband and two sons.

Visit her at: www.kendallryanbooks.com for the latest book news, and fun extras.

Subscriber to the newsletter: http://www.kendallryanbooks.com/newsletter/