Series Blitz for The Condemned Series by Alison Aimes 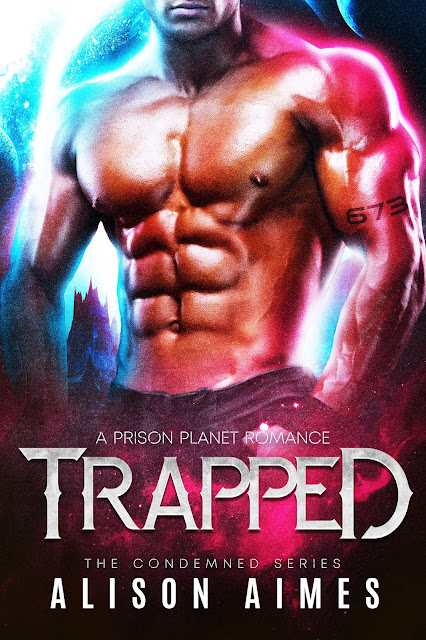 
BLURB
“Convicts don’t ask. They take.”
Marooned on a primitive prison planet , Bella West has one chance for survival until rescue arrives: trade her body for protection.
The ripped hulk who claims her is more beast than man. Convicted of a crime he didn’t commit, ex-soldier Caine Anders has lost his humanity after eight grueling years on a hazardous planet of dirt, rock, and treacherous inhabitants.
He looks out for himself and never grows attached. So, when the bold female offers him pleasure in return for protection, he takes the deal without hesitation. He never expects her touch to alter him. Or to feel something beyond lust.
But caring for someone on Dragath25 may be the greatest hazard of all. And, as the dangers multiply, it’s no longer certain whether she’ll be the key to his salvation or his destruction....
The first book in the Condemned Series, TRAPPED is a stand alone, action-packed, sexy sci-fi romance with a HEA, a strong heroine willing to do what it takes to survive, and a scorching hot, broken alpha hero you can’t help but fall in love with. 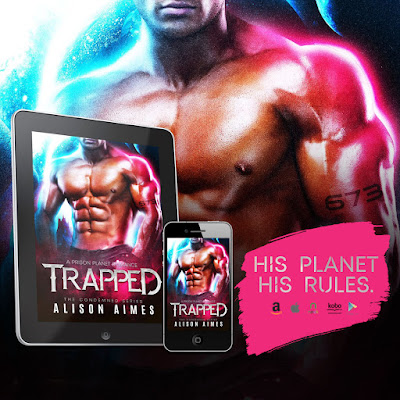 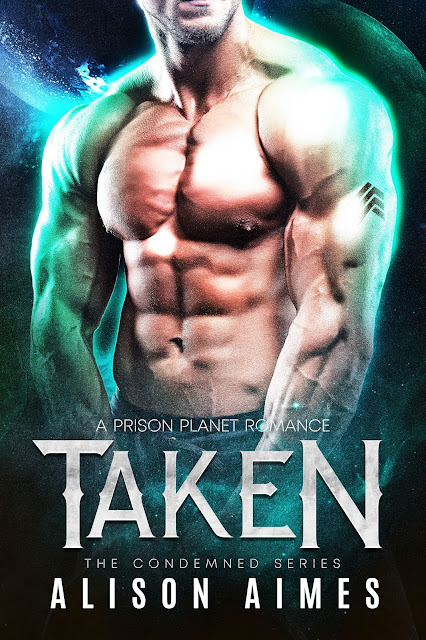 “I’m going to teach you what it is to want.”
As a breeder, Ava Davies has only known pain and punishment. Sneaking off planet is meant to give her a fresh start. Instead, she crash lands on a brutal prison planet and comes face to face with the one male she’s never forgotten. The ex-warrior, now barbarian convict, she condemned to this very place.
Shackled and tossed over the his hulking shoulder, she expects death, but Commander Hunter Valdus has a different plan. He’s finally found the key to his escape and his revenge. All he has to do is keep the treacherous, but beautiful female alive and at a distance until he can use her as bait for his dark purposes.
But raw, blood-pounding need is a potent force, and even the best-laid plans can be laid to waste, especially on Dragath25.
The second book in the Condemned Series, Taken is a standalone, action-packed, sexy sci-fi romance with a HEA, a resourceful heroine who discovers true pleasure, healing, and a second chance where she least expects it, and a strong, sexy hero who knows what his female needs and how to give it to her. You’ll fall hard for him.
ADD TO GOODREADS 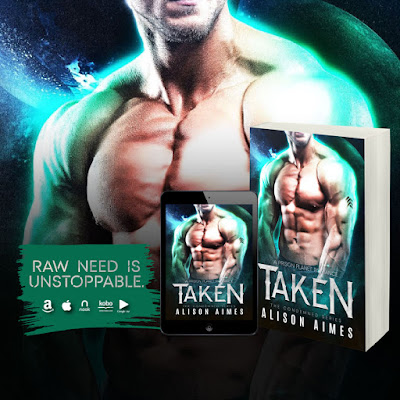 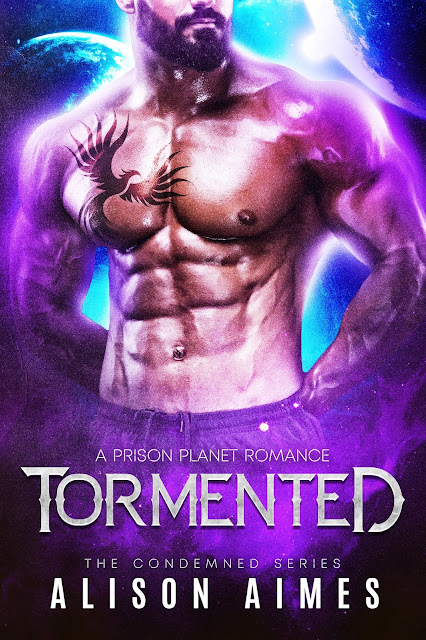 “On your knees.”
Captured, collared, and caged is the last place ice-cold Council assassin Jade Lakotesh wants to be, but when she discovers she’s sharing her prison with her target, a ripped barbarian who blames her employer for his fate, she accepts only one of them will leave the cell alive.
Walsh Ryker hit rock bottom with the deaths of those he loved most. Now, he’s plummeted to a new low, trapped with a cellmate as ice cold as she is stunningly hot. She’s out for blood, lacks any ability to cooperate…and leaves him more alive than he’s felt in years. For a man no longer interested in feeling, she may be his greatest hazard to date.
He never expects to see her as more than the enemy. She never expects to crave his rough, raw commands.
But as dangers mount, and they are forced to work together to defeat a shared threat, will the scorching passion between these two enemies entomb them in the dark forever—or be the key that sets them free?
The third book in the Condemned Series, Tormented is a standalone, action-packed, sexy sci-fi, enemies-to-lovers romance with a HEA and a dirty-talking, strong alpha who meets his match where he least expects. You won’t be able to put it down. 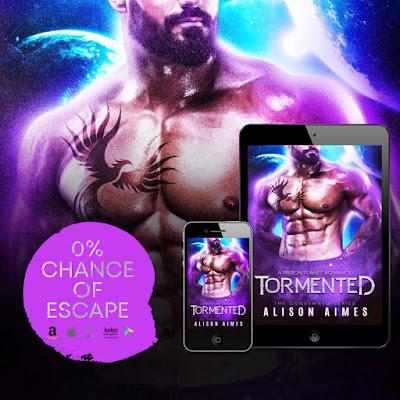 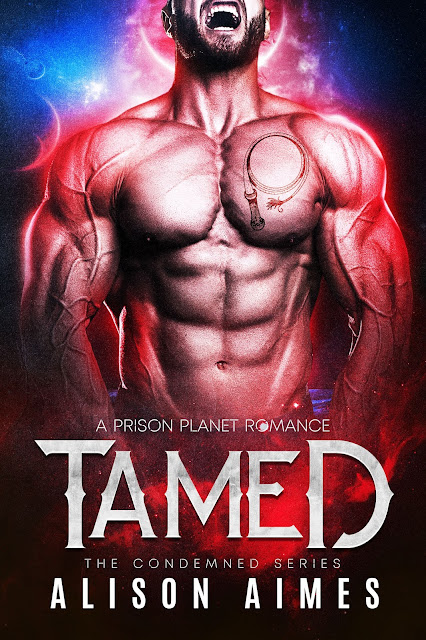 “Talk or suffer the consequences.”
Ruthless warrior Grif McIntyre is known for his brutal interrogation techniques, his expertise with ropes, restraints, and unbearable pleasure unrivaled. A skill he learned too young from a monster even more merciless than he. Tasked with breaking a critical target, he assumes the mission will be no different from any other.
But the female he captures is not what he expects. His fascination with her unlike anything he has experienced before.
Captured and chained by a terrifying beast, Nayla knows her survival depends on her silence. But the way he handles her leaves her desperate to trust him with her body and her secrets. Maybe even her heart. Except he wants the one piece of information she cannot afford to give.
Soon, it is only a question of who will break first.
TAMED, Book 4 in The Condemned Series, is an action-packed, smoking hot standalone SciFi romance about two people from different worlds who are more alike in their desires than they could ever imagine. While the hero and heroine deal with unequal power dynamics and rope play, pleasure is always the name of the game. This is a HOT read and a wild ride for those who like an edgier adventure.
ADD TO GOODREADS 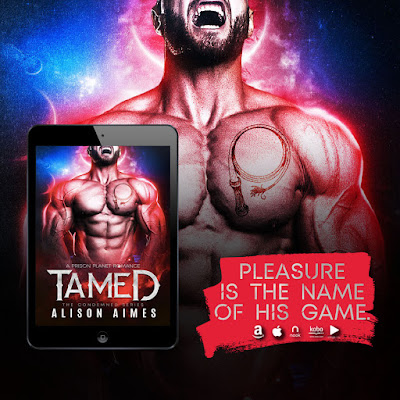 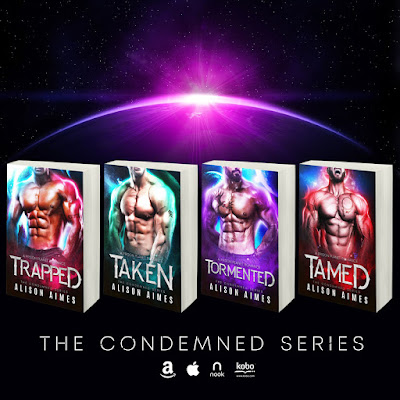 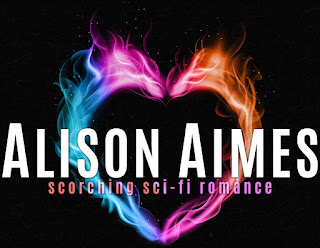 Alison Aimes is the award-winning author of the sexy sci-fi romance series the Condemned as well as the sizzling contemporary romance Billionaire Bad Boys collection. A sci-fi fanatic with a PhD in Modern history, she’s an all-over-the-map kind of woman with a love for dramatic stories and great books, no matter the era. Now, she’s creating her own stories full of intrigue and passion, but always with a happy-ever-after ending. She lives in Maryland with her husband, two kids, and dog. When not in front of the computer, she can be found hanging with family and friends, hiking, trying to turn herself into a pretzel through yoga, listening to a fabulous TED talk, or, last but not least, sitting on the couch imagining her characters’ next great adventures.
AUTHOR LINKS
AMAZON
BOOKBUB
FACEBOOK
GOODREADS
INSTAGRAM
PINTEREST
TWITTER
WEBSITE
Posted by Gia Guido at 7:01 PM