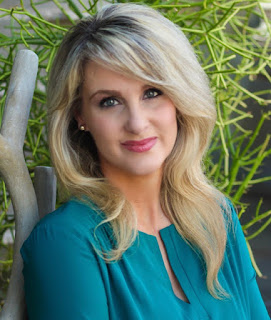 Although Marina Myles lives under the sunny skies of Arizona, she would reside in a historic manor house in foggy England if she had her way. Her love of books began as soon as she read her first fairy tale, and grew by leaps and bounds when she discovered Nancy Drew/Agatha Christie mysteries and rich, historical romances.
Dreaming of becoming a published author, she wrote her first 'gothic' story at age eleven. She went on to study creative writing at Southern Methodist University- where she received degrees in Communications and English Literature. During her time in Dallas, she had the unique experience of being a Dallas Cowboys Cheerleader.
Now with her loyal Maltese close by, she relishes the hours she gets to escape into worlds filled with tortured heroes, strong heroines, and their fiery-but not easily attained-love affairs. She's busy being a wife (to her Italian-born husband) and a mother (to her two beautiful daughters), but she is never too busy to hear from her amazing readers. 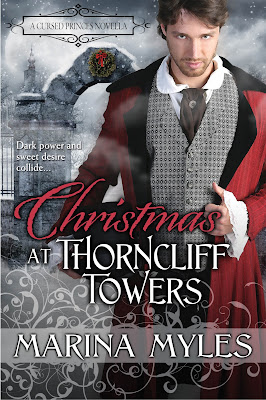 Thorncliff Towers is done up for Christmas, secure against wind and wolves. But Karina Petri is shut out, too, and the gypsy witch wants what's inside. She envies the gifts, the feast, the pretty clothes, of course. But her true desire is for the love of Constantin Stoica. Her smolderingly handsome childhood friend agreed to serve Lord Draven after his brother was caught stealing last year. He suspects Karina was involved—and it would take more magic than she possesses to make him forgive…
Constantin has always been drawn to Karina's dark curls, flashing eyes, and reckless ways. But trusting her has proven dangerous before, and this night holds more to fear than most. The wrong decisions could cost him his job, his safety—even his life. But letting Karina go could cost him his heart…

Like the gingerbread that beckoned Hansel and Gretel, the aroma of Christmas Eve supper had lured Karina to Thorncliff Towers one year ago. She vowed never to return, but she was willing to eat her words for handsome Constantin.