You don’t have to be a medical student to know the dead don’t walk. Anyone who’s buried a pet in the backyard knows they don’t even lurch.  Which is not helping Giovanni on his adventures through med school! Join him over 8 semesters in this new series of YA/NA novellas for a whole new take on B-movie monsters. 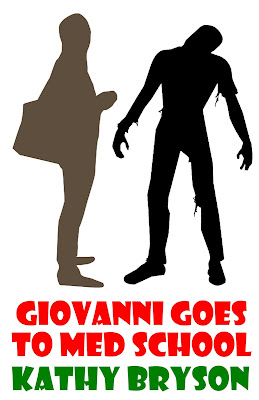 Working the night-shift in the morgue was supposed to be a chance to study in peace and quiet. At least until Giovanni’s dead patient sat up and started fussing at him! Now he’s got to convince her she’s dead or convince an unbelieving medical community to take action, so he can get back to learning about the dead – not the undead!

Giovanni sighed and put down the paperwork. He didn’t see where he could do anything more for Mrs. Harris and the hope that maybe he’d done enough started to creep up on him. After all, the other, fully qualified doctors had administered the actual anesthetic. He was probably just feeling indoctrinated guilt from being raised in a large Catholic, Italian family.

Dimly in the background, he heard a mournful howl. Rufus, he thought with an inward eye roll and it didn’t even occur to him how eerily appropriate it was for the dog to howl just then. Instead, he reached for a pen and the toe tag on the bundle in front of him, determined to ensure that Mrs. Harris reached her final rest without mistake.

The toe tag pulled away. Frowning, Giovanni reached again. The toe tag slid away from him and he watched horrified as the swathed figure writhed, then sat up. From somewhere behind him, he could hear frantic barking and a high-pitched wail. When he gasped for breath, he realized the wail came from him even as the cocooned corpse bent forward and mumbled, “Sonny, you scream like a girl.” 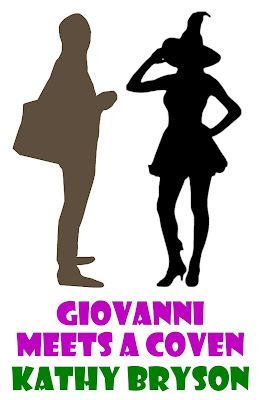 Giovanni Meets A Coven
Having successfully dealt with his first zombie, Giovanni is looking forward to the upcoming semester. Then the accidents start, costing Giovanni not one, but two jobs and no end of embarrassment, not to mention multiple contusions and abrasions! Is it just bad luck or is the curse of the zombie out to get him? And which of the voodoo queens suddenly surrounding him can he trust to help out?

The scream hit him right before the buffer did, but the buffer got his attention. The thunder of the machine’s engine roared in his ears as Giovanni scrambled to escape the grinding monster, but it churned after him even as he fled down the hospital corridor. He dodged the buffer’s mechanical pursuit, but even as he leapt over it, the buffer followed, hounding him relentlessly. Giovanni gasped for breath and staggered as he landed. As he fumbled to his feet, he felt the hem of his baggy scrubs catch. “Turn it off, turn it off!” he yelled.

A couple of orderlies fell over each other to reach the power cord even as the janitor fumbled for the power switch. Giovanni tried to kick the machine off his legs and found they were pinned. He could feel the fabric of his scrubs tightening around his legs as the buffer consumed it, but that panic was quickly replaced by the realization of what damage the buffer could do once it ate through the material. The surface epidermis across the ankles was thin, but more alarmingly, the subcutaneous dermis contained almost no adipose tissue. Those scrubbing brushes were about to chew through his skinny, little legs down to crispy, crunchy bone. 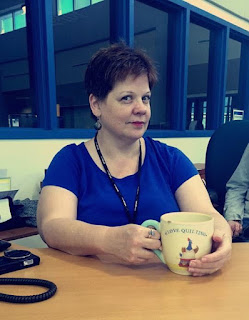 Kathy Bryson knew she wanted to be a writer when she finished reading through her school and local children’s libraries. She honed her writing skills on marketing brochures, websites, and several unfinished manuscripts before going into teaching and finishing award-winning books that shamelessly exploit her coworkers. You just thought I made this stuff up!