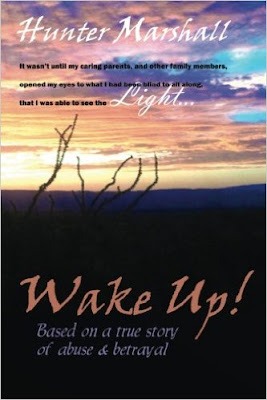 Wake Up! Based on a True Story of Abuse and Betrayal by Hunter Marshall

I only knew two things when I married Grey Andrews: one, I was in love; and two, I wanted to rebel against my parents.  For the first time in my life -- REALLY rebel.  I, however, wasn't prepared for the onslaught of negativity and abuse I encountered.

Grey would  make sure I knew where I stood, with him, and with everyone else.  He of course, was allowed to go and do whatever,wherever he pleased.  Even during the rare times I would stand up to him, he would be sure that I knew I was nothing.
"You?  What man in his right mind would want you?  You are the biggest bitch I've ever known.  Not to mention, you are damaged."  Grey said as he wheeled around with that all too familiar sneer.  The last thing I heard was - - "I only married you out of pity."

I felt like I had been punched in the gut! Did he really mean that?  I loved him so much and thought if I loved him enough, he would change.  Would he realize how lucky he was to have a beautiful wife and son?  Only time would tell. 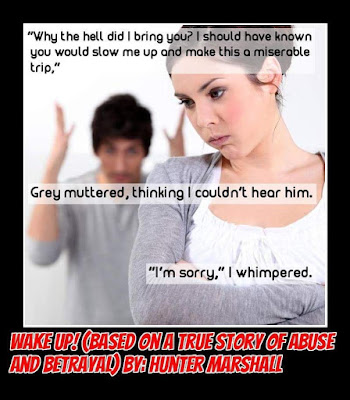 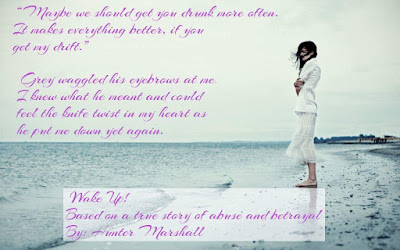 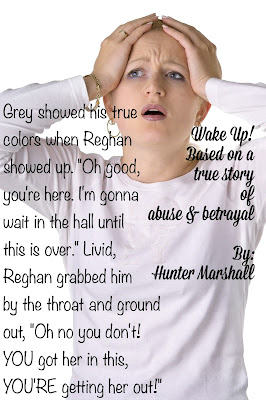 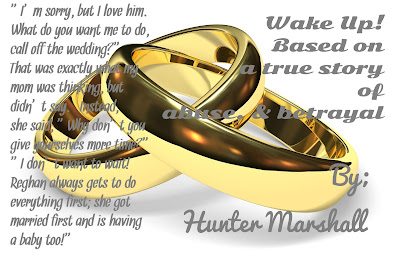 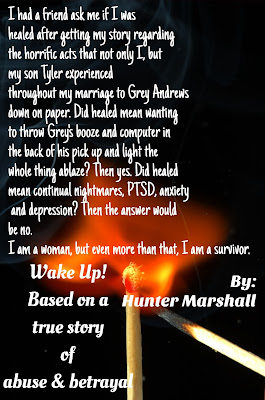 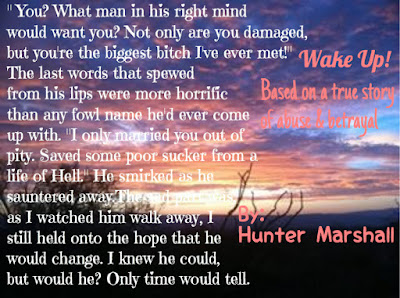 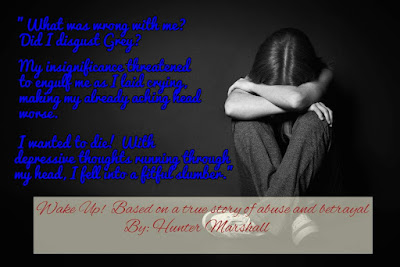 Hunter Marshall is a native of Idaho. She was born three months too early with a disability and wasn't supposed to be able to walk, talk, see, hear or have any semblance of a normal life. Her mother however, believed she was more than a disability.  She made sure she did everything she was capable of to reach her full potential.
Coming from a big family, it was either keep up or get left in the dust.   It was because of her love of reading and writing that she knew, even at an early age, she was destined to be a writer.
She went on to graduate high school much to the awe and amazement of the doctors who told her parents she would never amount to anything, get married and have children.  She then succeeded in getting a degree in Social Work. Her knowledge of Social Work and concern for issues facing mankind have assisted her in many aspects of her life including raising a family and writing her first novel, “Wake Up! Based on a true story of abuse and betrayal.”
It is her faith in a loving Father in Heaven that is a driving force in coming to terms with her past and learning that, although difficulties may arise,  there are ways to "get through" the times that seem impossible.

1. Can you tell us a little about your books?
My first book, Wake Up! Based on a true story of abuse and betrayal is about my first marriage-- I wrote it as a way of healing from all of the abuse I endured.


2. When did you know you wanted to write a book?
I've wanted to write since I was a little girl; wrote hundreds of short stories that I don't have anymore due to all my stuff from my teen and younger years being burned.
3. Do you work with an outline, or just write?
Well, for the first book and the current one, it's kind of like a journal so it's written with specific dates, although names, dates and places have been changed-- after the one I'm writing now, it'll probably be by the seat of my pants like everything in my life :)
4. Do you have a favorite food or drink you must have nearby when writing?
Pretzels and Pepsi
5. Do you listen to music while you write?
Yes, what I listen to depends on what scene I'm writing; sometimes it's country love songs, but at others it's heavy metal.
6.  If  you could spend 24 hours as a fictional character, who would you chose?
I don't really have a character I can think of at the moment.
7.  What are writing projects are you currently working on?
I'm currently working on another "based on a true story" about a friendship that endures more than 20 years, even when a lot of those years they weren't in contact, but when they did reconnect it was like the years never happened.