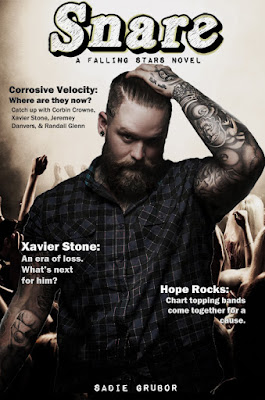 SNARE
Sidra Campbell lives by a hump-him-and-dump-him rule. No love, no messy emotional strings, means no chance of losing control – again. She came to L.A. to support her cousin Liza, but she's also running from the vicious cycle she left behind in Pennsylvania.
Unfortunately for her, two men aren't making life easy. One invokes the haunting nightmare of a past she's fought hard to be a survivor and not a victim. And another so tempting, so persuasive, she reinforces the wall around her heart and dons her mask to keep the behemoth out. To everyone else, she appears confident and happy, but they’re always the ones hiding the deepest pain.
Xavier Stone, former drummer to one of the greatest rock bands, Corrosive Velocity, has suffered loss after loss. Finding himself a full-time dad and in threat of losing once again, he's barely hanging on.
There's one woman who creates a spark of interest so strong he can't seem to keep his hands to himself. She hates him. At least, that's what the mask of insults and indifference she wears wants him to believe, but her kiss tells another story. Xavier has lost too much. She may not be happy about it and can run all she wants, but Xavier's done losing.
When two explosive personalities collide, one runs and the other snares. 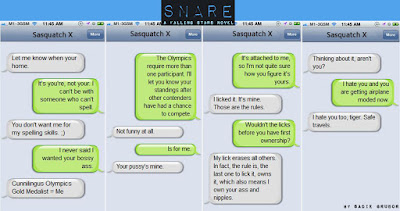 Not giving a shit that her family is witnessing the moment, I advance. In one long stride, I reach out and grab her by the back of the head. Fisting her hair, I tilt her face to mine.
"I hate the way you just accept it," I grumble.
"Fat girls are used to superficial judgments," she whispers.
"Don't," I warn, tightening my hold on her hair, not enough to hurt her, just enough to get my point across.
Her tongue peeks out, wetting her lips.
"It's okay," she reassures, but her eyes tell another story.
Emotions storm in her blue eyes, strength battling against pain and hurt.
"Tiger, I'm so thankful you're strong enough to brush this shit off, but it's not, nor will it ever be, okay for anyone to talk about you that way," I inform.
There's a small jerk to her body, a nervous movement. Her eyes glance to our observers and then back to me.
"Okay," she concedes, placing her hands on my chest and patting.
She's fucking placating me.
Stowing my phone in the pocket of my coat, I take her face in both my hands and lock my eyes on hers, keeping them captive, making sure I have her full attention.
"Christ, Sid, you smell like the best summer day, look like the wickedest thing I could ever choose to sin with, and sound like the best fucking porno soundtrack when I'm deep inside you."
The air between us grows thicker, heavier, and, I swear to God, sweeter.
Her mouth parts on a shaky breath. Chest heaving, she bites her bottom lip.
"Oh my," Sid's mother says on a breath.
A throat clears from behind me and our surroundings return.
The gleam flashing in her eyes gives away her evil intentions. If there's anything I know for sure about Sid, it's her habit of using humor to hide her emotions.
"AVN Award worthy?" she asks, making me smile.
Licking my lips, I bring my face closer, and whisper, "No, 'cause I'm the only fucking one who's gonna hear it."
"Well, the boy definitely knows how to speak to her," Sid's father states.
"He sure does," her mother sighs. 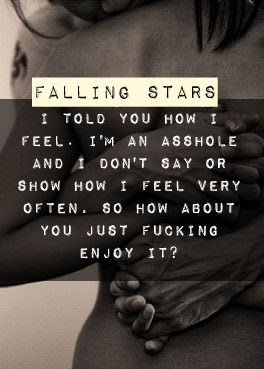 Stellar Evolution – Novella 1.5: (not a standalone) 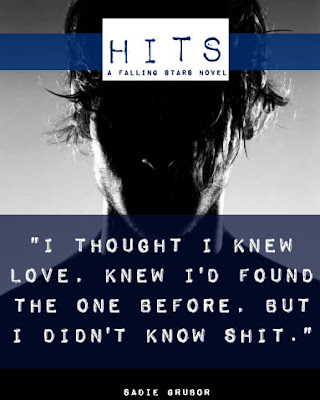 
Stellar Collision – Novella 2.5: (not a standalone) 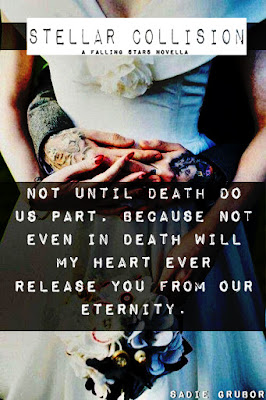 About Sadie Grubor:
I'm a self-professed, foul-mouthed, book nerd who seeks world domination with her sinister side kick, evil minions, fatal depth dwelling feline, hell hound, and villainous quadruped lagomorph.
Oh-Kay, so in reality...I'm a foul mouthed, wife, mother of two children, a cat who refuse to leave our basement, a fluffy white ankle biter named Puff, and an over eating bunny rabbit, who happens to spend the little spare time available in a day writing and reading.
We are still seeking world domination - No Seriously, we are.
www.sadiegrubor.com
www.booknerdrevelation.com
www.facebook.com/AuthorSadieGrubor
www.facebook.com/SadieGrubor
www.twitter.com/sadiegrubor
www.pinterest.com/sadiegrubor
www.sadiegrubor.tumblr.com
www.goodreads.com/author/show/6470181.Sadie_Grubor

Amazon:  www.amazon.com/Sadie-Grubor
Barnes & Noble: www.barnesandnoble.com/c/sadie-grubor
Smashwords: www.smashwords.com/profile/view/sadiegrubor
Interview With Sadie Grubor:
Hey there. Thanks for having me today.
Let me quickly introduce myself – for those who don't know me. I'm Sadie Grubor, author of The Falling Stars Series of rock and roll men and woman, along with some other standalone books.
My books fall into the adult contemporary romance genre. Though some fall into other sub genres, such as Rock Stars, Billionaires, and Boy Next Door. Given the language and sexual nature of my characters, my books are definitely for mature… erm, well adults.


At the moment, I'm still on a 'newly released book' high in my rocker series of books. So, if you are more into rock stars, then Falling Stars, book one in The Falling Stars Series, is the way to go. But since it's really up to reader preference, you may be into a different style of story. In that case, VEGAS follows you home is a great standalone based on the married in Vegas trope, but with a twist.


I know it sounds boring and predictable, but each of my characters have a special place in my heart. Certain ones make my heart ache, rejoice, and laugh my large ass off. So, I really do love them all. Honestly. Even my secondary characters, I adore each of them.
BUT… There is one character who was so much fun to write and to vicariously live through that I still can't get her out of my head. She's still in there beating against my skull with more story to tell. This character is Sidra (Sid) Campbell.
We first meet Sid in HITS (Hidden in the Stars, book 2 in The Falling Stars Series). She is the heroin's cousin and closest friend, and has a mouth on her that won't be filtered or ignored. She was only ever meant to be a secondary character, but ended up capturing all of my attention until she had her very own story in the series.

I'm a rare mixture of both. I do outlines and research, yet once I get writing I just let it flow. My outlines and notes often go straight into the garbage.


I have a desk situated in what is our 'should-have-been-dining-room'. This is where the magic happens. Okay, so what really happens is that I sit here and talk to myself (characters), eat gummy bears and drink wine.


Yes, most of my books have a soundtrack I create and use while writing. Sometimes songs just fit certain characters or set a certain mood. While this is my typical routine, there are times I find myself needing complete silence to write certain things.


Lagartha from Vikings. Yes, I know it's not from a book, but she is such a badass. A hot badass. I just want to be her for a day. Or date her for a day.


Of course, I love to read. But I also like to get lost in other creative outlets: baking, creating book swag for upcoming signings, and crochet/knitting.


There are a few new projects on the horizon. An upcoming novella will follow Snare (which just released last month) as well as aplanned 4th book in The Falling Stars Series.
On top of these, I'm working with an awesome group of authors who write rock star romance/erotica to bring a collection/box set to life next year. There are also some new stories and characters screaming to be released from the confines of my imagination. From pontoon boat floating, river camping, ex-military men, To a post-apocalyptic sector leaders and warlords. And don't forget the feisty, strong women who slip past any armor they put around their hearts.
Right now, I have more ideas than I have time to write them. Currently accepting wine and Xanax donations to calm the chaos in my head. 