Release Tour for River of Love by Melissa Foster 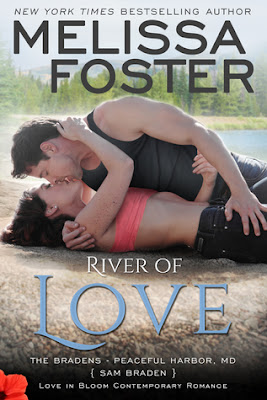 River rafting and adventure company owner Sam Braden works hard and plays harder. He's fast, focused, and determined--and never at a loss for a willing woman to share his time with. The trouble is, the only woman he wants refuses him at every turn.

Physician assistant Faith Hayes escaped her painful past and built a safe, happy life in Peaceful Harbor. She's also put what she's learned to good use helping others by founding Women Against Cheaters, an online support group. When her boss's sinfully sexy brother sets his sights on sweet Faith, she knows the self-professed player is everything she shouldn't want, and she's determined to resist him.

Sam pulls out all the stops, proving to Faith that his past doesn't have to define his future. As she lets down her guard and begins to trust Sam, intense conversations turn to intimate pleasures. But when real life steps in and their pasts collide, it's Faith who's left with something to prove.


DUKE RYDER BALANCED his cell phone against his shoulder, listening to his buddy and investment partner Pierce Braden talk about their newest potential investment property as he followed the rickety wooden dock onto the white sandy beach.

A MAN COULD take a wedding for only so long before he drank too much booze or left with a warm, willing woman to wash away all that purity. Sam Braden stood with a drink in one hand and a greedy itch in the other, debating doing both.

“I’ll take the redhead if you want the brunette.” Ty, his youngest brother, lifted his chin in the direction of the bar. In addition to being a world-renowned mountain climber and photographer, Ty was also Sam’s carousing partner. “Unless you’re double-dipping tonight, in which case I’ll go for one of the Staley sisters.”

Sam scoffed. Been there, done them.

He spotted two blondes slinking across the dance floor toward them. He’d hooked up with the one who was currently eye-fucking him last month, and the redhead Ty had been ogling moments ago had joined them in their hot, sweaty romp. His gaze shifted to the sexy brunette standing by the bar looking like she wanted to jump over it and hide behind it but she couldn’t quite figure out how. Faith Hayes. He’d been trying not to look at Faith all night, but he was losing that battle. Faith worked in Sam’s brother Cole’s medical practice. She was sweet, and good, and smart, and… Sam should not be thinking about laying her on the bar and doing dirty things to her gorgeous body.

No. He definitely should not.

Every time he looked at her, every time he thought of her—which was every damn day—that feeling of wanting more than a few quick hookups resurfaced. He not only wanted to lay her down on the bar, but he wanted to take her home. That was bizarre, too, since as a rule Sam never took any woman to his cabin. But half his visits with Cole at his office were merely made-up opportunities to get a glimpse of Faith. He didn’t fully understand his fascination with her, considering he usually preferred the kind of woman who wanted to jump him and damn well knew how, but there was no denying the stirring inside him every time she was near. He forced himself to look away and focused on the dance floor, where Cole, their eldest brother, danced with his new wife, Leesa, and just beyond, their younger brother Nate and his fiancée, Jewel, were gazing into each other’s eyes. Weren’t they always? Sam used to get hives just thinking about being tied down—unless, of course, it was to a bed. But he couldn’t deny how happy his brothers seemed since they’d fallen in love, and lately he’d begun feeling as if he were missing out on something.

The tall blonde sidled up to Sam, blocking his view of Faith and blinking flirtatiously, while her friend joined Ty. “You boys look lonely.”

“Ladies,” Sam said smoothly, bringing his attention back to the pretty girls who definitely knew how to use their bodies for the good of mankind. 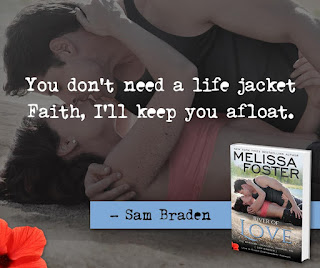 Melissa Foster is a New York Times & USA Today bestselling and award-winning author. She writes contemporary romance, new adult, contemporary women’s fiction, suspense, and historical fiction with emotionally compelling characters that stay with you long after you turn the last page. Her books have been recommended by USA Today’s book blog, Hagerstown Magazine, The Patriot, and several other print venues. She is the founder of the World Literary Café and Fostering Success. When she’s not writing, Melissa helps authors navigate the publishing industry through her author training programs on Fostering Success. Melissa has been published in Calgary’s Child Magazine, the Huffington Post, and Women Business Owners magazine. Melissa hosts an Aspiring Authors contest for children and has painted and donated several murals to The Hospital for Sick Children in Washington, DC. Melissa lives in Maryland with her family. Visit Melissa on social media. Melissa enjoys discussing her books with book clubs and reader groups, and welcomes an invitation to your event.