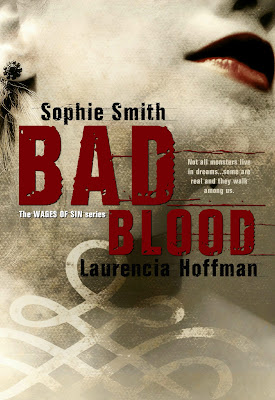 by Laurencia Hoffman
Blurb:
Vampire, Blake Auckley develops a wild and rebellious nature that puts him and all humans who are unlucky enough to make his acquaintance in danger. Abandoned by his maker, Melina, the night he was created, Blake is used to being on his own, but when she suddenly reappears in his life, it changes his world yet again.Though forgiving and forgetting the past is hard, Blake and Melina attempt to put their differences aside and repair their relationship. However, with dark secrets and old wounds marking their souls, Blake's enemies not far behind, and so many obstacles still ahead they must fight to survive the danger, as well as each other.
Excerpt:
Being a vampire, Melina didn’t think she needed to wear a seat belt, but it would have saved her some cuts and bruises. Her head hit her window, breaking the glass. She immediately curled up into a ball so that she wouldn’t cause damage to anything that was sensitive. She had tried to make herself as small as possible, and it was a good thing because the car was totaled. She groaned as her eyes adjusted to the twisted metal. It had been such a beautiful car just a moment before, but now, she had to crawl out of it.
She had heard the loud crack of a bone breaking.
Blake’s movements were stiff as he attempted to clamber from the inside of the overturned car, though there was hardly a scratch on him.
“What the fuck was that all about?” he muttered to himself as he crawled along the grass, soon staggering onto his feet.
For almost an instant he had forgotten about her, “Melina?” he called her name as he stood there, then darting around to the other side, “Melina!”
He could distinctively hear the slam of car doors from up on the road and the rush of footsteps, followed by the occurrence of voices.
“We know you are still alive, so show yourself, you vampire bastard!”
What have I possibly done to aggravate them? He thought. Then again, he was always getting under someone’s skin.
Melina was irritated when she saw that her injured hand had a broken wrist attached to it. The blood from where the glass had cut was making her hair wet and covered her shirt—or Blake’s shirt—and her outfit was ruined. Growling in frustration, she crawled out of the car and grabbed on one of Blake’s hands to help herself up.
“I’m fine,” she assured him.
Blake watched her with a sense of relief. She appeared injured, but nothing too severe. He was just glad that she hadn’t been killed—anything could have easily impaled them.
“What the fuck is going on, Blake?” Melina asked. “What do they want?”
Crouching behind the overturned car, Blake could hear the voices of the werewolves at the top of the bank.
“If you don’t show yourself, we’ll come down there and tear you limb from limb!” they shouted.
Blake didn’t understand their idle threats in the slightest, but obviously he had done something to enrage them. Maybe slaughtering every werewolf that he encountered over the centuries had something to do with it.
“Step away from the scene, gentlemen ... and lady.” The two police officers who had been pursuing Blake and Melina had pulled up and intruded on the situation, their guns loaded and aimed at the group who were lingering at the edge of the bank.
“This doesn’t concern you, human.” One of them spat as he turned to face the officers who were cowering behind the open doors of their vehicle. Their arms rested over the top as they aimed their guns in the direction of the wolves.
“This is an official crime scene, and therefore does concern us. You intentionally knocked that car off the road and are all under arrest for murder.”
“Murder?” the dark haired and only female present in the group questioned the notion. “They are still alive ... though not for much longer once we get a hold of them.”
Astonished and slightly angered by their intentions, one of the officers moved away from the security of the car and approached, “that’s it; put your hands up, all of you. Do it now!”
They were amused more than anything else and completely unmoved by the police’s efforts to get them to co-operate.
“I won’t ask you again before I am forced to open fire.”
As soon as he finished speaking, two of the males rushed over to each officer and commenced killing them, with either a snap to the neck or a brutal disemboweling.
They seemed to disregard the fact that they were on a busy highway and any passerby could easily see their crimes.
Blake watched them as he remained behind the car, hardly concerned for what trouble was about to be brought his way. What was the worst they could do to him, really?
“I wonder what I did this time,” he mumbled to himself with a faint smirk upon his face.
Glancing about the surrounding area, it became obvious that there wasn’t really anywhere for them to hide, they would have to either run back up onto the road or into the woodlands behind them, but God knows where they would end up if they did that.
Looking back at the road, Blake noticed the wolves were descending the bank, heading toward the wrecked car.
He would have to think fast if they were to avoid confrontation, “Melina, run.”