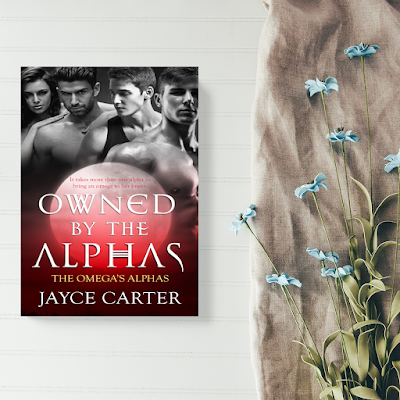 Owned by the Alphas

It takes more than one alpha to bring an omega to her knees.

Claire has sworn off alphas, but when her investigation into the murder of her friend puts her in the sights of not one but three of them, her resolve is tested. Even as she craves their touch, she refuses to fall for them. They can have her body, but she'll protect her heart at any cost.

Bryce, Joshua and Kaidan don't want an omega of their own, but they can't resist the mystery woman who breaks into their office. Her scent, her curves and her taste lure them, but they want more than just her body. It will take all three of them to play her at her own game and convince her to give them a chance.

As they navigate their complex relationship, Claire's search for the killer alpha puts them all in danger. Can they come together to face the threat, or will their secrets and fears destroy everything they've found? 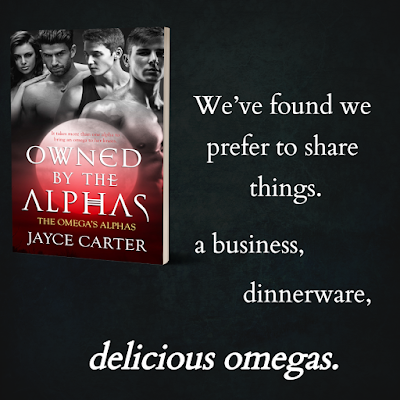 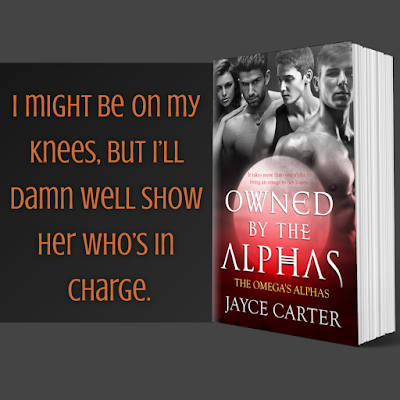 Jayce Carter lives in Southern California with her husband and two spawns. She originally wanted to take over the world but realized that would require wearing pants. This led her to choosing writing, a completely pants-free occupation. She has a fear of heights yet rock climbs for fun and enjoys making up excuses for not going out and socializing.

I write steamy reverse-harem stories, because my motto is that one penis is never enough! My main series is omegaverse, so all humans are born as either an alpha, beta, or an omega. There are a lot of animalistic traits that they have due to these designations (what is hotter than some growling and biting?), and my stories involve three or more alphas with a single omega. There are plenty of scenes with all three guys, bondage, dom/sub dynamics, and even knotting. Each book has a different female main character and her harem, so you can jump in wherever you’d like.

2. How many books have you written? Which is your favorite?

I have a total of 12 stories out between two series, but Claimed by the Alphas is my favorite because I have a horrible attraction to boys who are bad for me. The three alphas in this book are dangerous men who are more than willing to do whatever it takes to get what they want. Too bad for Ashley, the omega in the book, that includes her.

Kara, the omega from Tamed by the Alphas. She is fun, snarky and feisty. While I have no doubt we’d end up in jail due to a stupid idea of hers, at least the girl knows how to pick cuffs.

I am a huge fan of routine. For me, I start my day early with a huge cup of coffee and a quiet house! I tend to write between the hours of 5am and whenever my children wake up and decide I’m supposed to feed them.

5. Do you have a release day tradition?

I get a Starbucks, add a bit of liquor to it, and try very hard not to obsess over ranking! By that point I’ve done all I can do, so I do my best to ignore it all. Alcohol helps, as it does with most things.

I think the first in the series, Owned by the Alphas is a great start! It sets out the world for those who don’t know about omegaverse, and it starts with a two chapter long sex scene, so it really throws you into the deep end.

7. If your fairy godmother waved her wand and whisked you away to the location of your choice, which place would you choose?

Is the Thunder Down Under dressing room an option? Because we already know just one man isn’t enough for me, so that seems like a nice buffet.

8. What writing projects are you currently working on?

I’m working on my next series right now! It will be a reverse-harem paranormal romance trilogy that follows the same female main character through the three books. I am so excited to branch out and start a new series. The main character is a medium who is smart, funny and thrown into a world she’s always tried to avoid. In addition, she’ll have to deal with a moody werewolf, a dangerous hellhound, a snarky mage, and an old vampire who might just be betraying her. She’ll have to use all her wits to figure out what is wrong with the afterlife, all while enjoying the company of some sexy but very untrustworthy men. It might just kill her, but she’s dealt with the dead all her life. She should be an expert.