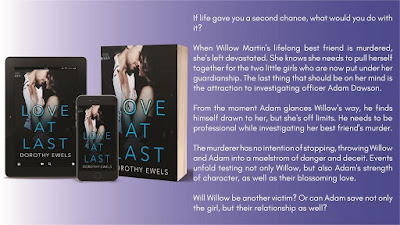 When Willow Martin’s lifelong best friend is murdered, she’s left devastated. She knows she needs to pull herself together for the two little girls who are now put under her guardianship. The last thing that should be on her mind is the attraction to investigating officer Adam Dawson.

From the moment Adam glances Willow’s way, he finds himself drawn to her, but she’s off limits. He needs to be professional while investigating her best friend’s murder.

The murderer has no intention of stopping, throwing Willow and Adam into a maelstrom of danger and deceit. Events unfold testing not only Willow, but also Adam’s strength of character, as well as their blossoming love.

Will Willow be another victim? Or can Adam save not only the girl, but their relationship as well? 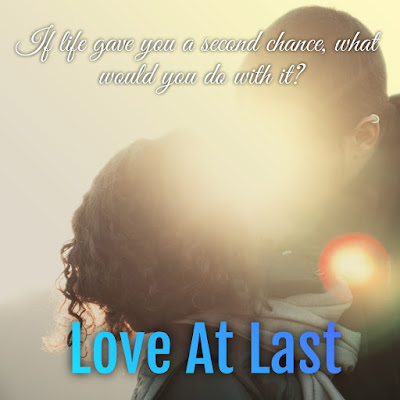 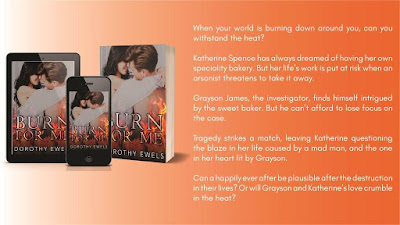 Katherine Spence has always dreamed of having her own speciality bakery. But her life’s work is put at risk when an arsonist threatens to take it away.

Grayson James, the investigator, finds himself intrigued by the sweet baker. But he can’t afford to lose focus on the case.

Tragedy strikes a match, leaving Katherine questioning the blaze in her life caused by a mad man, and the one in her heart lit by Grayson.

Can a happily ever after be plausible after the destruction in their lives? Or will Grayson and Katherine’s love crumble in the heat? 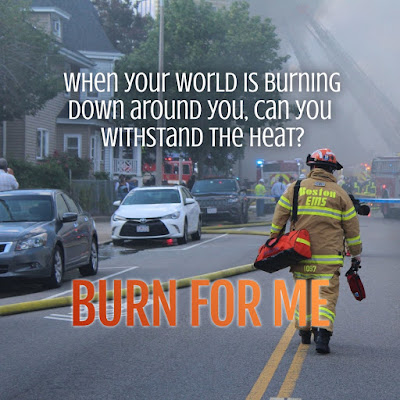 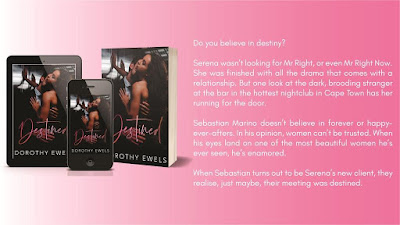 Do you believe in destiny?

Serena wasn’t looking for Mr Right, or even Mr Right Now. She was finished with all the drama that comes with a relationship. But one look at the dark, brooding stranger at the bar in the hottest nightclub in Cape Town has her running for the door.

Sebastian Marino doesn’t believe in forever or happy-ever-afters. In his opinion, women can't be trusted. When his eyes land on one of the most beautiful women he's ever seen, he's enamoured.

When Sebastian turns out to be Serena’s new client, they realise, just maybe, their meeting was destined. 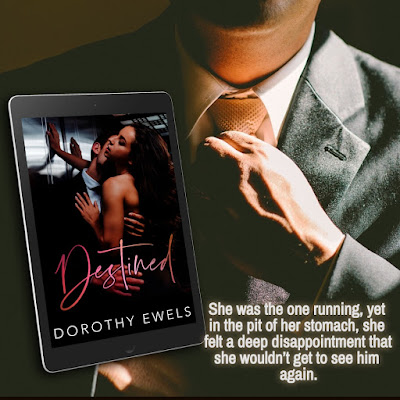 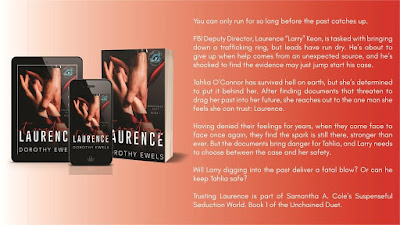 You can only run for so long before the past catches up.

FBI Deputy Director, Laurence “Larry” Keon, is tasked with bringing down a trafficking ring, but leads have run dry. He’s about to give up when help comes from an unexpected source, and he’s shocked to find the evidence may just jump start his case.

Tahlia O’Connor has survived hell on earth, but she’s determined to put it behind her. After finding documents that threaten to drag her past into her future, she reaches out to the one man she feels she can trust: Laurence.

Having denied their feelings for years, when they come face to face once again, they find the spark is still there, stronger than ever. But the documents bring danger for Tahlia, and Larry needs to choose between the case and her safety.

Will Larry digging into the past deliver a fatal blow? Or can he keep Tahlia safe? 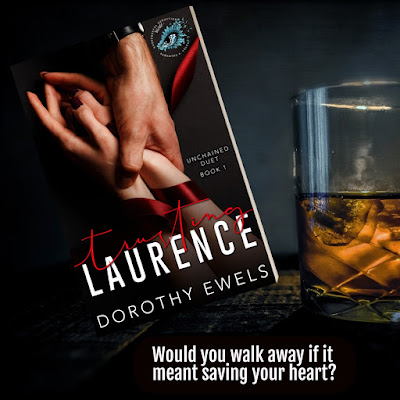 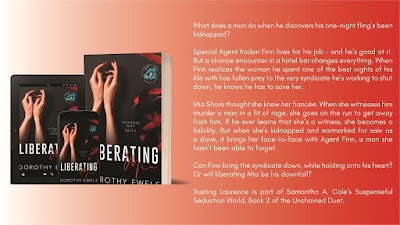 What does a man do when he discovers his one-night fling’s been kidnapped?

Special Agent Kaden Finn lives for his job – and he’s good at it. But a chance encounter in a hotel bar changes everything. When Finn realizes the woman he spent one of the best nights of his life with has fallen prey to the very syndicate he’s working to shut down, he knows he has to save her.

Mia Shore thought she knew her fiancée. When she witnesses him murder a man in a fit of rage, she goes on the run to get away from him. If he ever learns that she’s a witness, she becomes a liability. But when she’s kidnapped and earmarked for sale as a slave, it brings her face-to-face with Agent Finn, a man she hasn’t been able to forget.

Can Finn bring the syndicate down, while holding onto his heart? Or will liberating Mia be his downfall? 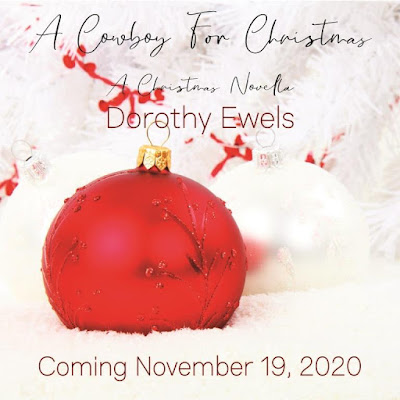 A Cowboy For Christmas Goodreads TBR (releasing November 19
Can the magic of Christmas overcome all?

Christmas is Sarah Walker’s favourite holiday, and a white Christmas has been on her bucket list for years. When her world comes crashing down around her just months before the holidays, she figures what better time than the present. Heading for her brother’s ranch in Colorado to lick her wounds and mend her broken heart, romance was the last thing she was looking for.

Jesse Colter has a soft spot for the ladies. He loves them in all shapes and sizes. The one thing his time in the marines taught him, though, was never to leave his heart vulnerable. There’s no telling when a loved one can be taken away. That philosophy is tested to its limits when Sarah crashes into his life with the force of a falling meteor.

Will Sarah’s heartbreak and Jesse’s fear of loss prevent them from finding the love they both deserve? Or will the magic of the holiday season bring about a Christmas miracle?
http://bit.ly/ACowboyForChristmasTBR

South African author Dorothy Ewels lives in the city of her birth, Cape Town, with her husband, son, two crazy rescue dogs and a cat with plenty of cattitude. A lifelong love affair with reading got her writing at a young age, but it wasn't until she was retrenched in 2017 that she finally found the courage to write her first book, leading to its publication in 2018. She’s addicted to coffee, books and finding humor in life, not to mention happy endings against all odds. As well as being a proud and active member of the Romance Writer’s Organization of South Africa (ROSA), Dorothy is also thrilled to be a contributing author in Samantha A. Cole’s Suspenseful Seduction World, Vi Keeland and Penelope Ward’s Cocky Hero Club and Kristen Proby’s Lady Boss Press.

I started out wanting to write hot and steamy romance – something along the lines of Fifty Shades (cliched, I know, LOL!). Somehow, it took a completely different turn and I found myself writing romantic suspense. My heroines are strong, independent women and my heroes are authority figures of some kind or another – strong enough to deal with their sassy ladies. The hot and steamy found its way into the stories in the end, just not in the way I’d imagined.

Currently I have one in progress and six written, five of which are already published. The other two are scheduled for release before the end of this year. Trying to decide which one is my favourite is a tough one. I’ve loved writing all of them and the characters all have endearing characters unique to them. But if I had to pick only one I’d have to say it’s Liberating Mia. Of all my characters, Finn and Mia have lived in my head the longest. I love their story and how Mia comes out so much stronger after all she’s had to endure.

So far, all my books are stand alones and can be read in any order. Trusting Laurence and Liberating Mia, however, are a duet and while each couple’s love story is complete in each one, it’s best to read Trusting Laurence first.

Gosh, that’s another tough one. After giving it some thought, I’d have to say Tahlia from Trusting Laurence. She’s a gentle, yet strong woman who suffered greatly at the hands of her ex-husband. But for all of that, she never hardened her heart. She’s loving, loyal and the kind of girlfriend you’d want by your side.

I find my writing flows best in the afternoons and evenings, so I tend to get all the admin type things out of the way in the mornings and settle down after lunch to get my writing in. I like to have some instrumental music playing in the background and need to put all electronics into airplane mode to avoid temptation. My workspace needs to be tidy and organised as I find when its littered with research notes, books and all manner of stationery it hampers my creativity.

Not really, no. Usually releases days are crazy since I self-publish and don’t have a PA. But my family always make it special for me, and treat me to dinner at the end of release day.

Sarah loves Christmas and has always wanted to experience a white Christmas since it’s summer time here in South Africa in December. When her world comes crashing down around her, she decides there’s no time like the present. So she heads for her brother’s cattle ranch in Colorado where she meets his business partner and brother-in-law, Jesse. And wouldn’t you know it, sparks fly, but Jesse lost too many team mates in the marines and is now reluctant to risk his heart purposefully. Can the magic of the holiday work a miracle? You’ll have to wait until November 19 to find out. 😉