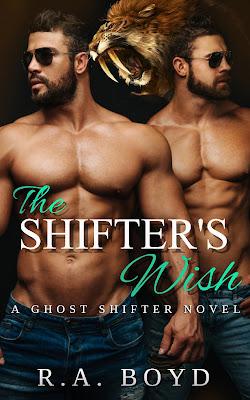 The Shifter’s Wish, book 1 in the Ghost Shifters of New Rose series:
One woman holds the key to making the fallen angels whole again…unless she allows the ghosts from the past to keep her from her future.
Widow Cass Stephens wants to mourn in peace. A freak snowstorm, and the fear of no snacks, drives her out into the cold and into the arms of two sexy shifters who may or may not want to rob her of her can opener.
Fallen angels Jax and Damon have been cursed. They need Cass to complete their Alpha Triad and awaken the dormant saber-tooth cats within them. And they really need that can opener.
Acceptance from their Clan is enough stress, but Cass’s presence brings unease to the surrounding packs and they’re willing to start a war to stop the Triad from forming. Cass will either prove she’s strong enough to be part of the most powerful Triad the shifter world has ever known or die at the hands of those who are afraid to find out.

Excerpt #1 from The Shifter’s Wish:
Cass walked down the canned goods aisle in search of a can opener. There was one left and she smiled. “Fluff, yeah,” she sang, reaching for the opener on the endcap of the aisle.
Just as her hand touched it, another hand reached around the other side and tried to grab the can opener. Cass snatched it and held it to her chest as if she were clutching her grandmother’s pearls. The hand felt for it again, and before Cass had a chance to claim her booty and make a run for it, a face rounded the corner and she stopped mid-escape.
Holy mushrooms. The guy was maybe in his mid-twenties with striking blue eyes, animated eyebrows, and hair so dark blond it was almost brown. He was tall, stocky, and his thighs were so thick it looked like he kicked down trees for a living. Ink crept up his neck from his black tee-shirt, and worn grey sweatpants encased his strong thighs.
Confusion blanketed his face as his eyebrows shot up. The side of his full lips quirked in a half smile. “I need that,” he said, his deep voice sounding as if he should be harmonizing with a quartet of sexy tree kickers.
“Umm, not as much as I do,” Cass said, taking a step backward.
He smiled at her and pointed to the can opener she held. “The cashier just walked me over to get that. It’s the last one,” he said.
Cass wasn’t sure if he was looking at the can opener or her breasts. It didn’t matter. She’d wrestle him to the death for the blessed thing she held to her chest. “It still is,” she said, turning around and running into a warm wall of man chest.
A zing shot through Cass’s body as large hands wrapped around her shoulders and steadied her before she fell on her ample ass. At least it was good for something. 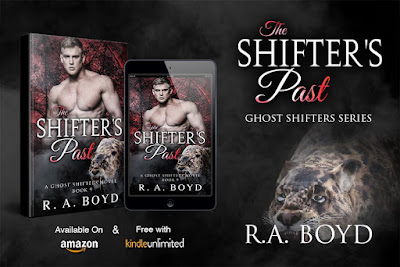 The Shifter’s Past, the 9th and final book in the Ghost Shifters of New Rose series, was released May 19th
Blurb:
All the ghosts of Bastian’s past are coming back to haunt him in a big way.
Nevada Pierson takes pride in being retired at only forty years old. But she’s bored. Being able to see ghosts isn’t as exciting as it sounds. Taking a job at the local pub seems like the right thing to do to keep busy, but the sexy shifter who always sits in her section makes her think there are other ways to pass the time.
Fallen angel Sabastian Booth is ecstatic to be the only unmated Ghost shifter in New Rose, Maryland. After millennia of roaming the earth, his beast is peacefully resting deep inside him, and neither of them is worried about finding a mate. His goal for this century is to protect the Alpha Triad of his clan. And to make up for the fact that he might be the reason his people are being hunted by the Rogue clan.
Moving on is tricky, but facing the past proves even more complicated when Sabastian finds the one woman who makes him want to forget the wrongs he has committed before he gets a chance to atone for them. Will he be the downfall of the Ghost shifters, or will his curvy goddess of a mate give him the strength to face his past and protect the future of his clan?

Buy link for The Shifter’s Past: https://www.amazon.com/gp/product/B084YZXL9W

About R.A. Boyd:
Author of the Ghost Shifters of New Rose and the Line of Lilith series, R.A. Boyd is a writer, and reader, of paranormal romance, horror and urban fantasy. She lives in Maryland with her husband, daughter and her massive collection of books. Seriously. Her books have their own room.
She loves all things paranormal but dabbles in romantic comedies and hockey fights. When she’s not writing at three in the morning she’s binge-watching Netflix or plotting random scenes from her novels in the voice of her characters. It makes her daughter giggle but worries her husband.