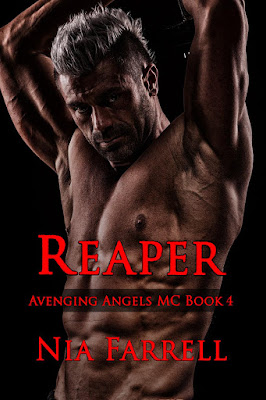 The dark, gripping Season One finale is loaded with triggers.  Consider yourself warned.

Maureen “Mama Mare” McLanahan is the mother of five grown children and married to Patrick “Papa Bear” McLanahan, President of the Avenging Angels MC.  For twenty-eight years, she has kept secrets that could shatter her marriage and ruin their lives.  No one knows that her oldest son might belong to Reaper Rhodes, President of the rival Blackwater Demons MC.

Reaper has been obsessed with Mare since high school.  When his collection crew brings back her daughter Rose as a party favor, he decides to save her for his son.  The next girl kidnapped has a mob boss uncle.  The Visconti crime family joins forces with the Angels to rescue both girls.

Reaper’s son is killed in a retaliatory strike by the Viscontis.  Wrongfully blaming the Angels, Reaper kidnaps Mama Mare to use as bait, with plans to kill her daughter.  Mare is rescued before that happens but Reaper escapes. She spends the next three years fearing for her daughter and struggling with PTSD from her ordeal.

Reaper eventually resurfaces with a vengeance, taking and using two more women before he’s through. His heinous acts demand justice, but whose hand will wield the sword?

This book had adult situations and triggers. Written for Ages 18+. 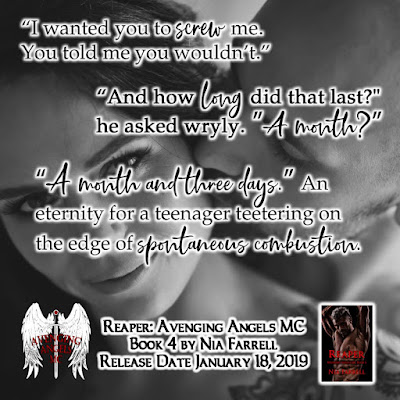 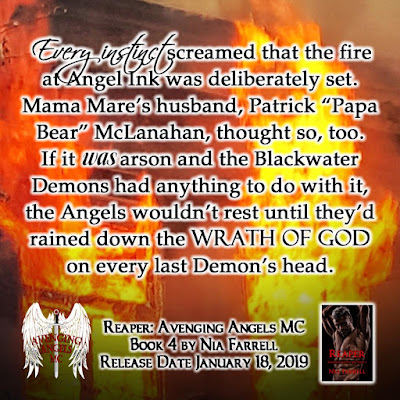 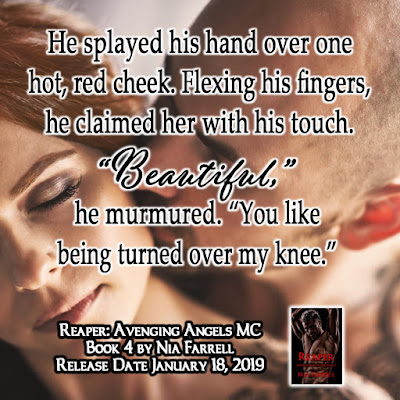 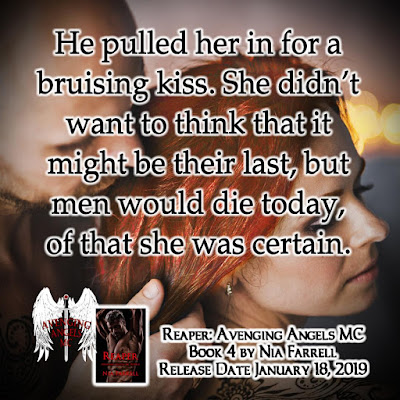 “Remember that Fourth of July at the lake?” he rumbled.  “You couldn’t keep your hands off me, even when I warned you what would happen.”

“You were g-going away,” she stuttered, gasping at the feel of his hand.  “I wanted to give you a reason to come back.”

“You shouldn’t have.  You were too goddamn young and my best friend’s little sister.  I knew Jack would kill me if he learned that we were fooling around.”

“I was fifteen,” she reminded him.  “Old enough to know what I wanted.”

What she’d wanted was Patrick McLanahan, the boy she’d loved since she was twelve.  Let skeptics laugh, but it was God’s truth.

“You were a goddamn tease,” he rumbled.  “You’d worn your swimsuit under your clothes.  You peeled them off right in front of me.  Fuck if every guy there didn’t want you.”

“Except you,” she said, remembering his resistance.

“Oh, I wanted you, too, babygirl, but I had enough sense to wait until you were older.  You didn’t let me, though, did you?”

“No, Sir.”  She supposed that she should be sorry, but she wasn’t the least bit contrite.  She had wanted Patrick to be her first.  If she’d waited—

He added a third finger, stretching her out, preparing her for his possession.  “I remember you standing by yourself chest-deep in the water.  The sky was clear enough, you could see the Milky Way stretched out like a stairway to heaven.  There was only half a moon but it was enough to see your breasts when I came over and you took off your top for me.”

Despite her blatant invitation, he hadn’t reached for her.  Her whole body had ached for his touch.  Desperate, she had taken matters into her own hands.

“You came over to me,” Papa Bear rumbled, pumping his arm and hitting her hot spot.  “You wrapped your fingers around my cock and jacked me until I came in my briefs.”

She hadn’t known what else to do.  She’d been trying to get him to notice her, but he was so goddamn stubborn.  He’d kept his distance all night, talking to her brother and their friends and drinking beer that they’d snuck in.  When the first of them followed the girls into the water, Patrick had kicked off his shoes, peeled off his clothes, and waded out to her, wearing nothing but his white cotton underwear.

She had tried to get him out of his drawers, too.

“I wanted you to screw me.  You told me you wouldn’t.”

“A month and three days.”  An eternity for a teenager teetering on the edge of spontaneous combustion.  “You were headed for boot camp in the morning.”

He was leaving, and she was desperate.  Dub Rhodes had been watching her… stalking her ever since his release.  She feared what would happen if he managed to catch her alone.  He was dangerous.  She knew that.  For whatever reason, he’d become fixated on her.  She had no doubt that he was capable of rape.  Given the chance, he’d steal her innocence and rob her of choice.

He would take what she had been saving for Patrick.

Patrick Seamus McLanahan was the boy of her dreams.  In her naughtiest fantasies, she had imagined him seducing her, deflowering her.  Despite her youth, despite her brother, despite his plans for a career in the military, she’d wanted Patrick to be her first.  On his last night home, she managed to make that happen.  There were things in the past that she wished she could change, but giving herself to Patrick wasn’t one of them.

“You were tight.  So fucking tight,” he rumbled, thrusting his hand and biting her neck in a claiming that betrayed his own tumult of emotions.  Outwardly today, he had stayed strong for her, for their family, for the club.  He needed to release his stress, to decompress, to reaffirm life and hope with sex, most basic of human needs.  “I thought I’d never work my way inside, even when I finally made it past your hymen.  Five kids and twenty-eight years later, and you still fit me like a glove.” 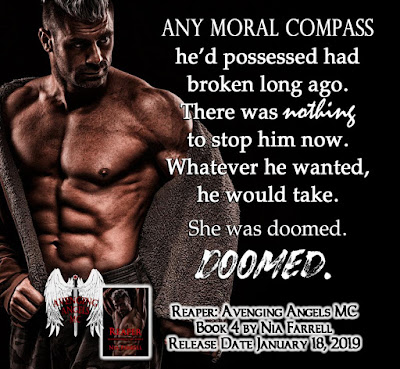 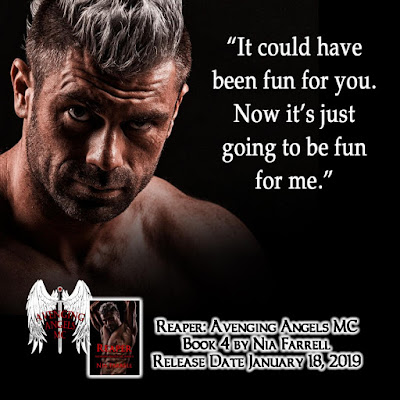 “You have five minutes to get yourself off—and don’t think about faking it.  If that pussy’s not dripping wet, Mojo gets to ream your ass while I’m balls-deep in your cunt.”

Five minutes.  And she was filthy.

She ran to the door.  Swiped her face, wiped her hands, and cleaned her finger.  Instead of going back to the bed, she stayed where she was, facing the door.

Mare parted her folds with one hand and shoved her other hand between her legs.  Finding her clit, she teased it, circled it, rubbed it, fanning her flesh like a fire-starter, her fingers intent on sparking flames.  The heat built.  A familiar tension took hold of her core.  A desperate twist of her nipple and she came, gasping from the strength of her release.  Her body stiffened while her core convulsed.  Pussy walls spasmed, squeezing her juices like nectar from a cider press to trickle down her thighs.

She rested her forehead against the door, regaining her breath.

Reaper knocked it out of her again.

Coming up behind her, he kicked her feet apart, shoved his cock between her legs, found her opening, and impaled her with one, vicious thrust.  He slammed into her again, shoving her against the door, pinning her to it like a butterfly that he’d collected, spread, and mounted—except that she wasn’t dead.

“Fuck, that was hot,” he grunted in her ear.  Sliding his teeth down her neck, he bit her shoulder so hard, she wondered if he’d drawn blood.  She whimpered from the pain and clamped down on her tongue to keep from begging.

“So fucking hot.”  He drilled into her, hips slamming into her with the force of a jackhammer and the ruthless rhythm of a heavy metal drum.  Reaching, he caught both breasts in a bruising grip and held her against him, her back to his front.

He tasted the tattoo on her shoulder, tracing the lines with his tongue.  “Ink’s good on you, little girl.  If we had more time, I’d commission another.  A tramp stamp with the Demons’ logo.  Every time you did it doggie, Papa Bear would know that I’ve owned this ass, too.”

With that, he pulled out, changed angles, and claimed her most private place, ignoring her squeals and pushing past the rings of muscle to seat himself inside.

He jacked his hips and started pumping.  Her tender tissue screamed its objection.

“You were too drugged to fight me even if you’d been free.  I couldn’t turn you over bound to the bed, and I couldn’t lift your legs, so I untied you, flipped you over, and took your virgin ass.”

He was pounding into her now, reaming her raw, ruthless, merciless, a savage rut that ended with a sharp thrust and a guttural cry.

He poured himself into her depths.  When the last pulsing stream had subsided, he shook himself like the beast that he was and pulled out.  She tightened her sphincter, hoping to contain as much of the mess as she could.

Letting go of her breast, he took the washcloth off the doorknob and cleaned his junk with it.

He stuffed it in her crack when he was done.

She straightened from the door and pivoted on the balls of her feet to face him, feeling debased and ill-used and dirtier than she’d ever felt in her life.

“I hate you,” she whispered hoarsely.

He slid his dark brown gaze from her lips to her eyes, shook his head slowly, and tsked.  “You’re gonna hate me more before this is done.”

Leaning into her, he pushed her against the door.  His thickening cock surged between them, eager for another round.  Humping her with it, he whispered in her ear.  “Five minutes thirty-three seconds….” 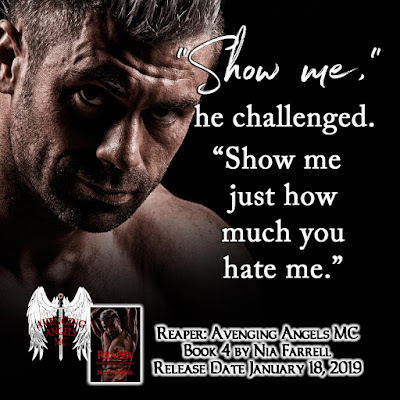 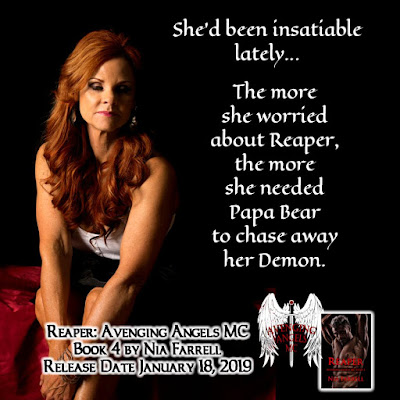 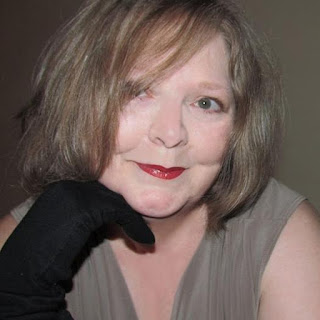 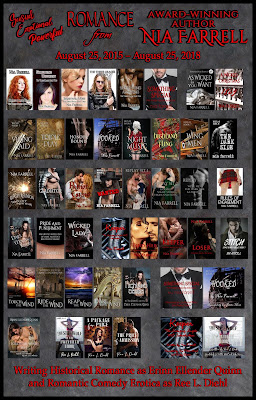 4. How do you come up with your characters names?
I ask them and write what I hear.  As a pantster, I plot nothing. I meet my characters, get a feel for the story they have to tell, and then follow where they lead.

5. If you could be friends with one of your character, which one would you chose?
I’m the most like Grace Murphy from my Three Graces series. We’ve both done psychic readings at Irish festivals, we both remember our past lives, and we both do hot water meditation that makes bathwater flow backward (clockwise) down the drain.  Grace is a natural healer. I’m a Reiki Master and a crystal healer.  She also works at a bookstore, so SCORE!

6. Do you have a release day tradition?
I set a demanding schedule for myself.  I had 20 releases in 2018 (and would have had 22 if an anthology hadn’t gotten pushed to 2019).  Release day is another workday, albeit manic. I’m writing the next book, doing promos, and watching the ranks like any other author.

7. If you had a superpower, what would it be?
Miraculous healing and relief of pain.
8. What writing projects are you currently working on?
Nia has a historical and Ree has a BBW/billionaire novella in the Stand Your Ground Anti-bullying Anthology, which will likely release the end of February. I’m polishing my first geek story for the Dominated by Desire BDSM Anthology out it May, writing Irresistible (a retelling of Leda and the Swan) for the Demigod Origins Anthology, and have two more anthology pieces for a BBW/BBM set being published by Reggie Deanching.  With the success of Secret Santa out in December, I’ll be fleshing my spy story novelette into the Made in Russia series.  I also plan to add titles in Nia’s Replay, Avenging Angels MC, Crime Family Values, and Forever Ours Series, plus launch the Dark Moons Saga.  I plan one or two full-length novels for my pen name Ree L. Diehl. I hope to get Erinn’s fifth book in her Touch the Wind Series out in 2020. She’s been quiet for far too long.

After the pace I kept last year, my goal was to slow down this year and do one release a month.  My current calendar has 27 titles, however long it takes to write them.  I do have a mainstream novel planned and hope to visit Ireland in 2020 when it’s time to research and write it.  I just designed the cover for a new MC series that I’ll introduce in the Twisted Steel MC Anthology coming in April 2020. (I’m a one-stop shop. I write, edit, proof, format, design covers, make teasers and media kits, and pimp.  I currently have about 35 covers done for stories not yet written.  It gets pretty crowded in my head.)