Blog Tour for Boys of Brayshaw High by Meagan Brandy 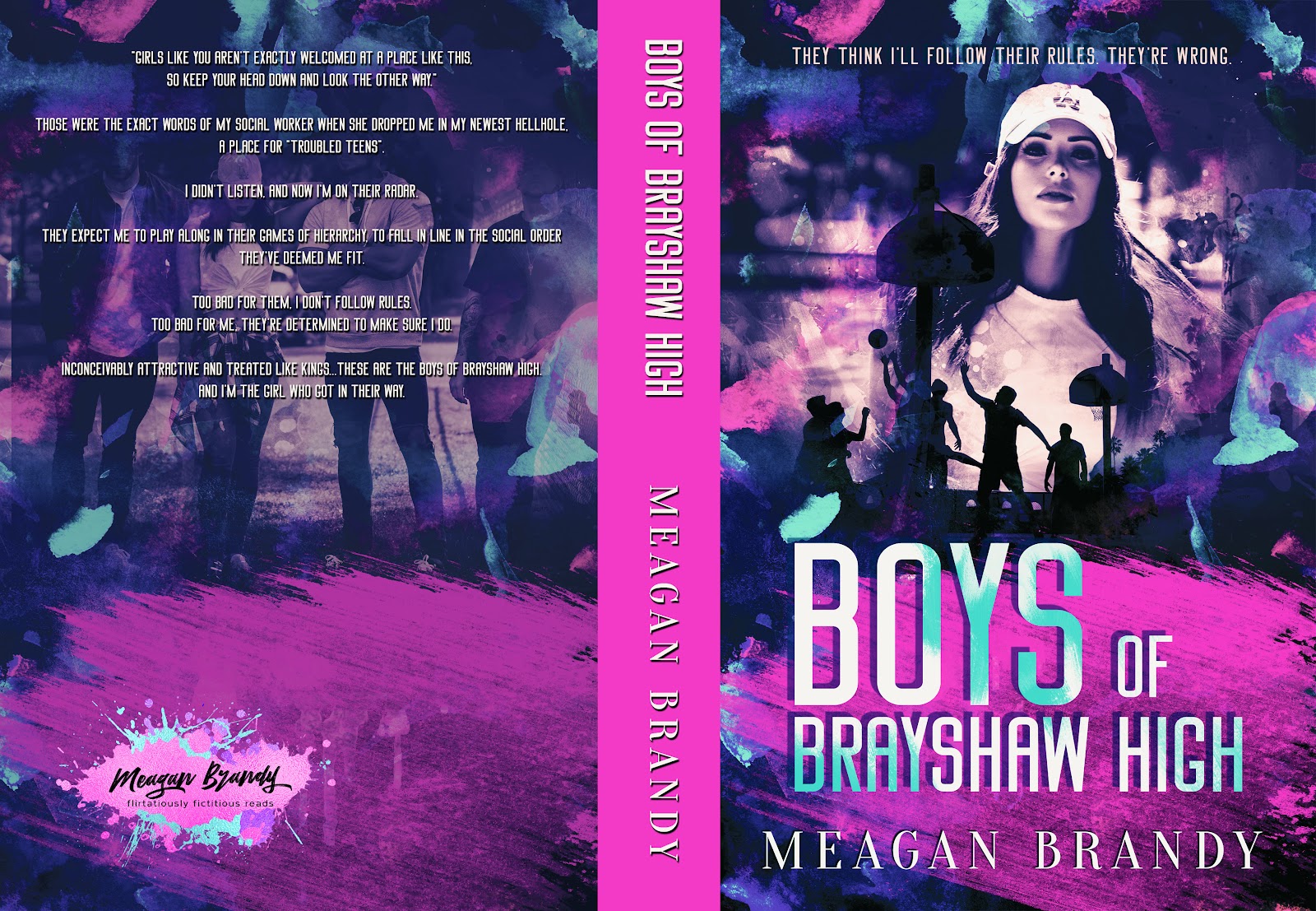 "Girls like you aren't exactly welcomed at a place like this, so keep your head down and look the other way."

Those were the exact words of my social worker when she dropped me in my newest hellhole, a place for "troubled teens".

I didn't listen, and now I'm on their radar.

They expect me to play along in their games of hierarchy, to fall in line in the social order they've deemed me fit.

Too bad for them, I don't follow rules.
Too bad for me, they're determined to make sure I do.

Inconceivably attractive and treated like kings...these are the boys of Brayshaw High.

And I'm the girl who got in their way. 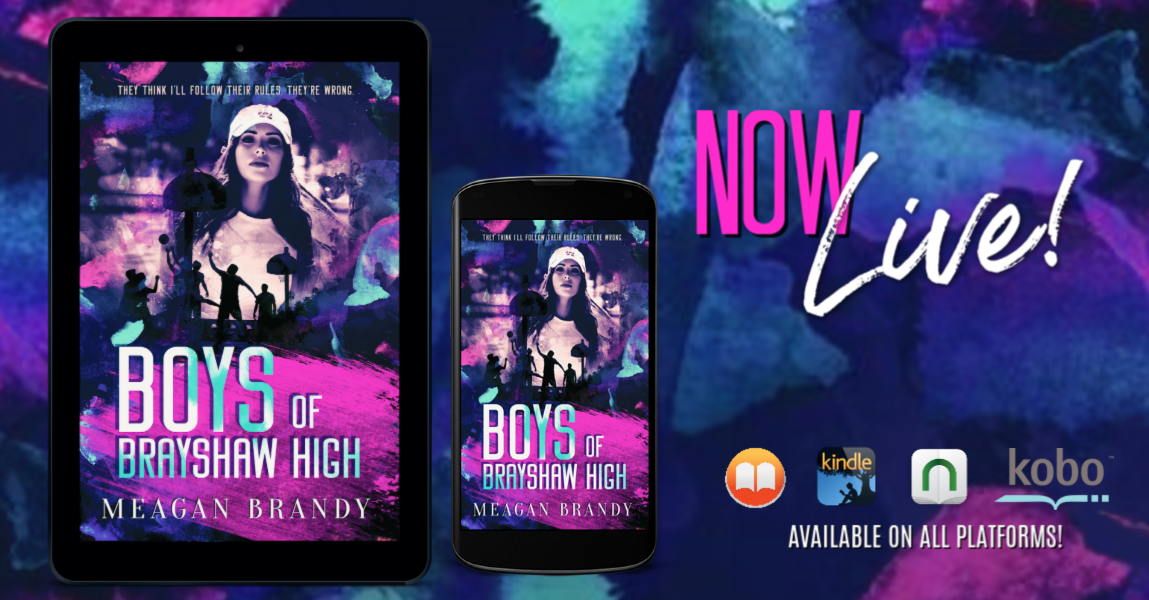 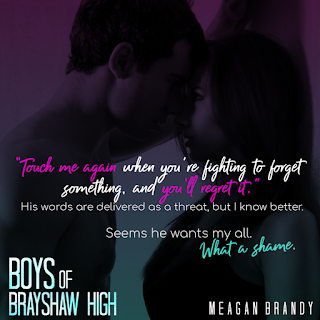 Listen to the Boys of Brayshaw High Playlist here

“You’re Raven Carver, aren’t you?”
I face forward with a frown.
“Sorry, but Maybell told me you were coming today. I didn’t think you’d be at school already, but usually the only new kids who come are people from the home.”
“Yeah, well, I wasn’t exactly given an option so, here I am.”
“Are you gonna run?”
I laugh lightly, shifting my eyes to hers. “Nah. I’ve got nowhere to be. Now I’m stuck in the system ‘til I’m eighteen anyway, so fuck it. May as well cruise through.”
“Those guys back there, you need to be careful. They’re… not like most high schoolers. People around here listen to them, follow their every move.”
So those are the guys the chick was referring to this morning.
“What you did today? They won’t allow that without getting you back. They can’t.” She shakes her head.
“I keyed his Denali.” I shrug. “Big fucking deal.”
The girl stops, her eyes widening. “Yeah, you got that part right. It is a ‘big fucking deal.’ If they let some nobody, new girl like you – no offense – openly disrespect them like that, it’ll threaten their entire system.”
“System.”
“Yeah. System. They’re a big deal around here, and not just at the school. You either kneel at their feet or get stomped under them. They’ll make sure you’re shamed, one way or another.”
We make our way up the dirt driveway. “He disrespected me first. If there’s one thing I know about guys, it’s if you let them walk all over you, they’ll take pleasure in doing it.”
The girl steps ahead, pulling open the screen door as she looks back at me. “If there’s one thing I know about the boys of Brayshaw, it’s that they’ll destroy anything that threatens to mess up their vision. Watch out, Raven. Your little stunt today may have gotten the guys you’re used to off your back, but for these guys? All you did was paint the mark brighter.”
I raise a black brow and she scowls at me.
“A target from them means a target from all their followers,” she spits.
Right. “Let me guess… you’re a follower?”


This time it’s her who pops an eyebrow. “Welcome to Brayshaw High.” 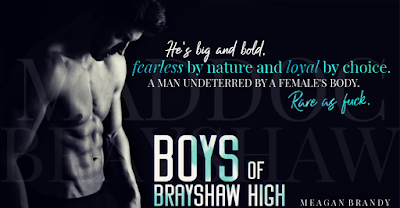 Boys of Brayshaw High is a good read.   I found my self hooked in the beginning but wavered a little in the middle and then got hooked back in in the last half of the book.   Rae is string girl.  She's not one that you want to mess with.  She hasn't had much of a mother and i finally taking by the system.  She's dropped into an odd house that takes the kids no one wants.  The town she is placed in is also odd.  The Brayshaws run the town and have a rival with the Gravens. Maddoc, Captain and Royce are Brayshaw boys.  They pretty much run things.  Rae is a girl that doesn't back down and doesn't take crap from anyone.  I'm pretty sure she doesn't think much before acting.  It doesn't take her long to fall on Maddoc, Captain and Royce's radar.  Maddoc, Captain and Royce are cocky and confident and a little bit of bullies but they also have a sweet side.  I don't want to give to much away but stick with this one to the end.   It's book one in the series so it ends with a hook that has me wondering what happens next.
4 Amazeballs Stars!