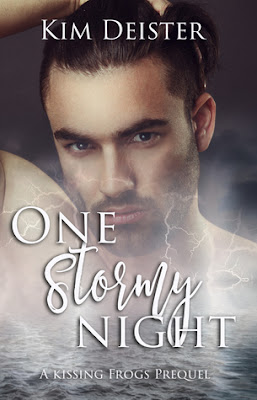 One Stormy Night is the long-awaited prequel to Kissing Frogs, a paranormal romance that travels through time! It is Finn’s story, telling the story of a cursed life. There are real people and real events in this. Even some of the news headlines that are referenced, although weird, are real. It was a challenge to find ways to weave those things into the story!

Everything happens for a reason. Even a curse...

Finneas O'Malley is not a man built for love. He could never love a woman more than he loves the adventure and danger of a life at sea, the freedom to chase the wind wherever it takes him. The lure of a foreign land, the danger of a battle at sea, the exotic lasses he beds... how could any man turn away from that?

But when Finn wrongs Siofra, all of that changes. Curses. Magic. Centuries of being beholden to a vengeful fae who wants nothing more than to destroy him. Can he find a way to break the curse? Will he find the very thing he once scorned?

NOTE: This book should be read after Kissing Frogs.

Kim Deister was born and raised in a tiny college town called Potsdam in the wilds of northern New York, about as far north as one can be without living in Canada. She grew up in a family of teachers and lawyers and bucked all the traditions by joining the US Army. She spent many years in boots working as a Signals Intelligence Analyst and linguist in the military intelligence corps (no jokes!). She also spent time as a tech writer for Corning Glass, a executive administrative assistant, a web designer, and an editor (still). Now she’s a writer who loves both reading and writing them. When she’s not writing or lounging on the beach, she’s probably somewhere with her nose in a book!

1. Can you tell us a little about your books?
I am definitely a multi-genre author! The Kissing Frogs duology is paranormal romance with a little bit of comedy. The first one is contemporary, while the second travels through history. They are loosely inspired by the fairy tale, The Princess and the Frog. Eclipsed, however, is contemporary romance with no paranormal at all, just like Camouflage Christmas, which was part of the 25 Days of Christmas anthology. Trust in Chaos, part of the Unleashed anthology to be released 20 August, is a paranormal romance set in a dystopian future. Sandy Toes, part of the Wicked Nights of Summer boxed set is a shifter/witch, paranormal romance. But I’m currently finishing up a totally different book, Last Night. This one is a psychological thriller/horror novel!
2. What inspires you to write?
A lot of different things. Sometimes, it’s a random person I see when I’m out and about. Other times, it’s a news story or a photograph I see. I’m about to start writing a contemporary romance/mystery that was inspired by a phrase in the Shinedown song Call Me.

3. How many books have you written? Which is your favorite?
I’ve written four books, three novellas, and one short story. Kissing Frogs is definitely a favorite, if only that it will always be a symbol of fulfilling my dream of being an author. Eclipsed is my most personal, largely based on my own experiences. But Last Night, although dark and disturbing has been my favorite to write. I don’t know what that says about me!

4. Do you have a special time to write or how is your day structured?
During the school year, I usually write from about 8 in the morning to about 3. I take advantage of the kids being in school, etc. It’s much more of a challenge during vacations!

5. Do you have a favorite food or drink you must have nearby when writing?
Coffee, coffee, and coffee. Have I mentioned coffee? And in the afternoons, those little Sargento cheese and nut snack packs. I love them!

6. Do you have a favorite spot to write?
If I’m at home, my desk. It had a former life as a dining room table that sat six, so it’s nice and roomy. Candles and incense and lots of music help, too. The music changes from book to book, but it’s usually loud and angry! Otherwise, there’s a little café on the North Shore (I live on O’ahu in Hawai’i) that has free WiFi, great coffee, and lots of wraps with alfalfa in them. It’s open air and I love the smell of the ocean!

7. What are some of your favorite pastimes?
Well, I’m convinced I’m at least part mermaid, so my favorite things to do usually involve the beach. But besides that, I read like there’s no tomorrow. I also play a lot of World of Warcraft. And during hockey season, I can be found on game days, screaming for the New York Rangers. And, for fun, I’m learning Swedish. Yes, I’m a nerd!

8. What are writing projects are you currently working on?
I just finished the first draft of Last Night. I also have a bunch of anthologies coming up at the beginning of 2019. I’m also just beginning a new novel, the one inspired by Shinedown. So, I’m betting 2019 will be just as busy as 2018!