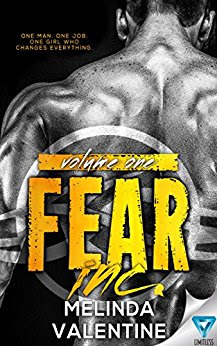 
Ex-cop Maxwell Fear knows all too well what can happen to a witness of a violent crime—which is why he has no choice but to protect her.

He will keep it professional. He won’t get involved in her personal life. And he sure as hell won’t try to convince her to ditch the scumbag who calls himself her boyfriend.

There’s only one thing Max needs to do, one thing he’s determined to do—keep Sloane alive.

Nothing and no one will stop him from doing his job…not even her.
https://www.amazon.com/Fear-Inc-1-Melinda-Valentine-ebook/dp/B071HHB1WK 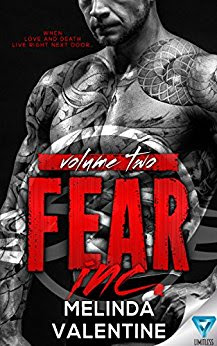 
Ex-Cop Paxton “Tank” Sokolofski’s life is shattered—first by a bullet, then by a woman. Now he passes his days tracking down cheating spouses. Not his idea of a good time.

When Cori Transue moves in next door, things get a little more interesting. She’s a sultry little firecracker, and the way she looks at him definitely gets his attention.

However, he doesn’t need a woman added to the mix, especially one with even more baggage than he has.

But when he hears her screaming, he finds himself knee-deep in a mystery no cop could ignore…and closer to Cori than he’d like.

Tank’s weathered more than his fair share of broken hearts, broken dreams, and broken noses. But he doesn’t know if he can handle Cori…or the brutal monster who’s stalking her.
https://www.amazon.com/Fear-Inc-2-Melinda-Valentine-ebook/dp/B071LJ2T9H 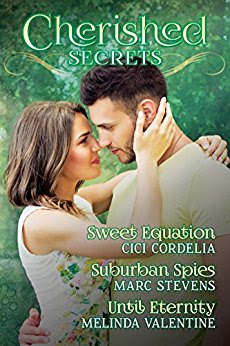 The night before Cole Jacobs left town for college and a football scholarship, Emily gave him her innocence in the back seat of his Camaro. The hours of passion they shared resulted in heartbreak for Emily, and six years later she’s still recovering from the consequences of her actions.

Cole didn’t see what was right in front of him when he blew out of town after sleeping with the sweetest girl he’d ever met. Now a pro football star, returning to his hometown for a promo event at his old high school, he comes face to face with Emily Patterson . . . and soon realizes that in one reckless night, he’d ruined her life.

Can two people connected by tragedy overcome their past and find love?

Jennifer and Slade come from two different worlds. Slade’s a CIA agent. Jennifer is an ex-KGB super spy. Their lives revolve around espionage, subterfuge, and deception. When Slade catches Jennifer breaking into his suburban home, the gloves come off . . . and everything else as well. He knows what she’s looking for, and is hell-bent on keeping it from her. But mixing spies, lies, and bedroom eyes can lead to disaster, especially when the games they play don’t have any rules.

Jo Knight got pregnant after a one-night stand with the guy she believes is the lead singer of Midnight Hour. Unwilling to be labeled a groupie who’s only after a payday, she decides to keep the identity of the father to herself.

Until one day they meet again.

Lawson ‘LT’ Nottingham knew the moment he looked at Jo’s twins that they were his boys. He wants nothing more than to make them a complete family. Can he convince her what they shared that night was the real thing and he’s here to stay? Or will he once again lose the woman he’s spent years longing for?


About Melinda Valentine:
Melinda Valentine was born in upstate New York. The youngest of four children (and the only girl) made it easy for her to turn to books as a companion. As a young child she was whisked away to Baltimore, Maryland. She spent her youth reading books such as Nancy Drew, The Chronicles of Narnia and The Little House on the Prairie saga.
Today Melinda calls West Virginia home, with her three hilarious children and rambunctious puppy. She works full time as a bank teller and creates characters that she hopes her readers fall in love with as much as she has.
Socila Media Links:
Website: www.melindavalentine.com
Twitter: http://twitter.com/@Author_MelindaV
Instagram: http://instagram.com/Author.melindavalentine
Facebook: http://facebook.com/Author.melindavalentine
Goodreads: http://goodreads.com/Author.melindavalentine
Interview with Melinda Valentine:
1. Can you tell us a little about your books?
I write contemporary & romantic suspense with alpha males that go after what and who they want.
2. When did you know you wanted to write a book?
I have wanted to write books since I was 12 years old. I wrote countless short stories, but I was too scared to let anyone read them until a few years ago.


3. When you write do you write the first draft on a computer or paper and pen?
I almost always use my laptop to write. I change my mind too frequently to use pen and paper.

4. Do you have a favorite food or drink you must have nearby when writing?
Sweet Tea & Raisinets

5. Do you have a favorite spot to write?
I tend to move around depending on my mood. I have an office or I sit the living room with my kids.

6.  What is a usual writing day like for you?  How is it structured?
I have a full time day job. So typically, I go to work, come home and feed my 3 kids. I spend some time with them and then I try to get 1-3 hours in. Whether its writing, marketing, or networking. Ahhhh...The glamorous life of a writer lol

7. If you were a super-hero, what powers would you have?
That's a tough one. I'd have to say either invisibility or telepathy. I like to know things.

8. What are you working on next?
I just turned in a contemporary short story for an anthology (Craving: Secrets) coming out this August. I'm also working on the 3rd installment in the Fear Inc. series. I'm really excited for that one.
Posted by Gia Guido at 9:00 AM